At the top of last year’s XXL Freshman Class was New York rapper Desiigner. His debut single Panda is one of the catchiest releases in recent memories, and he’s ridden its wave to near exhaustion. It was first heard as a sample on Kanye West‘s The Life Of Pablo, hit the top spot on the Billboard 100 and has gone on to be one of the most heavily rotated songs on all radio stations ever. Now busy working on his debut album The Life of Desiigner, follow-up single Timmy Turner arguably proved that he wasn’t a one hit wonder. All in all, 2017 looks promising for the 19-year-old.

Desiigner is currently in Australia for FOMO Festival in Brisbane, Sydney, and Adelaide and is hosting headline shows in Melbourne, Sydney, and Perth, and we headed along to his Melbourne show at 170 Russell. Not knowing much of Desiigner’s catalog except a few features and his two singles, I was unsure what to expect from his set, particularly after hearing that his sets were littered with numerous reruns of Panda.

Kicking off the night were DJs Liz Cambage and MIMI, before local MC Ivan Ooze and crew jumped on stage. I see Ooze open for a lot of big names with varying fanbases, but he never shies away from the energy. He brings amazing vibes to the stage, building a rapport with any crowd in any mood. Dropping tracks like District 9, Mt Moon, and Fire definitely got the crowd amped for the headliner. Ooze is one of Australia’s better live performers and I look forward to seeing him at his own shows this year. 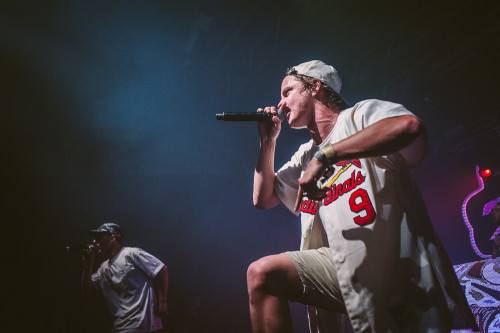 After Ooze’s set, Cambage brought out a cake and everyone sang him Happy Birthday. MIMI delivered half an hour of bangers, until Desiigner graced the stage, staring intently into the crowd without blinking. Before long, his shirt came off and the energy was turned up – but it wasn’t what it could have been.

Desiigner spent his short set jumping around the stage and into the crowd yelling sound effects into the microphone, and not doing a lot of, well, rapping. It felt childish, frankly, as if he was more obsessed with being famous and loved by an entire room, than putting on a memorable performance, or much of a performance at all. High energy is one thing, but totally failing to back it with actual rhymes is just disappointing. 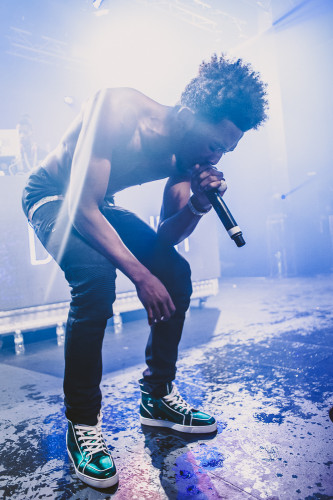 When he finally launched into Panda, the reason we were all there, he brought more people up on the stage than were left on the floor.

We give Desiigner a lot of credit and love for his recorded music, but in a live setting he has a lot of work to do. I’ll keep listening to the bangers, but I won’t be rushing out to see him again until he and his performance mature.

Check out the rest of the photos from Desiigner’s show here.