Though he’s flirted with mainstream attention, Vince Staples has always seemed to operate on the outskirts. Sure, most hip-hop heads would recognise his name, and Australians might know him best for featuring on Smoke and Retribution, from Flume‘s sophomore album Skin (he also supported Flume on tour here last year), and yet he has remained on the edge of superstardom.

In the two-and-a-half years since his critically acclaimed debut album Summertime ’06, he’s made himself known throughout the world, touring extensively, appearing everywhere from GQ to Yelp, collaborating with James Blake and others, releasing a brilliant EP, and generally proving himself to be a respectable man of the people.

With each move, he edges further toward mainstream success. Today marks the release of second album Big Fish Theory, an easy contender for album of the year. Given its hefty guest list (Kendrick Lamar, Bon Iver and Damon Albarn among others), the spotlight is officially on Vince Staples. 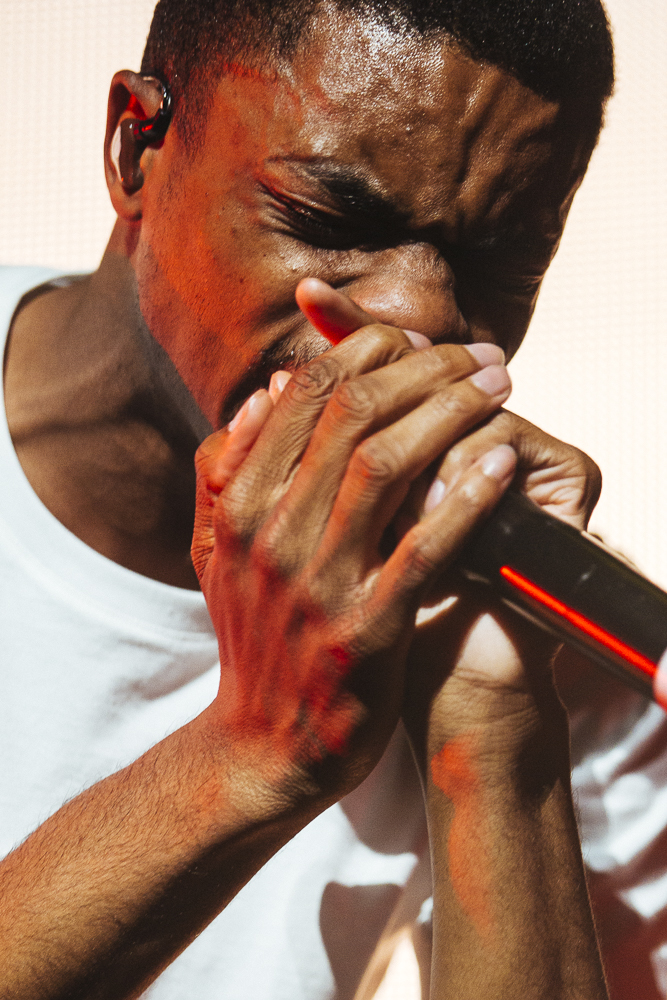 In the lead-up to its release, Staples told LA Weekly, “We making future music. It’s Afro-futurism. This is my Afro-futurism. There’s no other kind.” Staples, like a few of his contemporaries (Kendrick Lamar the most obvious comparison) are as much defined by the ambiguity of their musical style as anything else. Big Fish Theory is as much a hip-hop album as it is a dance album; it’s 2017, wrapped into 36 neat minutes. Yes, it’s the future, and the future is now.

Opening statement Crabs In A Bucket laments the human mentality of always wanting more. Immediately following is album highlight Big Fish featuring Juicy J. Here, Staples discusses how far rap has brought him, from “gun squeezin'” on Long Beach’s Artesia Boulevard to “countin’ up hundreds by the thousand”. In isolation, it’s a brag; in the context of the album, it’s a discussion of the pitfalls of a wealth-driven mentality (not unlike the fluid message of Lamar’s HUMBLE.) BagBak, released earlier this year features a similar message. Staples takes aim at the wealthy: “Tell the one percent to suck a dick, because we on now”.

There’s change a’coming, and Staples is at the front line.

Damon Albarn appears on Love Can Be, the pair’s second collaboration in as many months; Staples featured on Ascension, from the long-awaited, star-studded recent Gorillaz album, Humanz. Their chemistry is hard to ignore – it’s so potent, in fact, that Staples will be supporting Gorillaz on their upcoming US tour.

Albarn repeatedly croons “love can be” in a succession of melodic robotic filters, rendering him near-unrecognisable. Remaining uncredited, Staples uses left-field features from the likes of Albarn and Bon Iver as additions to – rather than drawcards for – his musical vision. The major exception here is Kendrick Lamar on Yeah Right, which features Lamar obliterating a co-produced beat from SOPHIE and Flume.

Despite his immense critical and commercial superiority, even Lamar succeeds as a secondary character within the story here. Not done with top-tier hip-hop names either, SAMO features a blink-and-you’ll-miss-it appearance from A$AP Rocky on the hook, deep in the mix, while final track Rain Come Down features a velvety hook from Ty Dolla $ign.

Party People explores the horror of Staples’ surroundings, and his attempts to reconcile a freewheeling party lifestyle with the scourge of police brutality in America. “How I’m supposed to have a good time/When death and destruction’s all I see?” he ponders.

Big Fish Theory is the kind of album that can be equally enjoyed at face value, or through its socially conscious roots; on the one hand you’ve got arresting, varied dance-orientated beats, strong guest appearances and heady, heavy beats. On the other, you’ve got a lyrically poignant, technically brilliant record which points a finger firmly at the world surrounding Staples, highlighting his concerns and educating listeners along the way.

Foregoing production from established names in favour of the lesser known Westside Ty and Zekoff, Staples proves that “visions of the future” is not just a buzzword, but the mantra of his album.

Big Fish Theory is one of the most ambitious yet cohesive records of 2017. At 12 tracks (including two interludes) and just 36 minutes long, it’s highly curated, leaving no room for even a hint of filler. With gritty lyrics and club-ready production, few in hip-hop are matching his sound, style nor vision.

Rather than collapsing under the weight of his own ambition, Staples’ album is a triumph. He proves himself more than worthy of a place right alongside his superstar contemporaries.

On Big Fish Theory, the lightning wit and acid tongue of this 23-year-old from Long Beach confirms his place at the top of the game. And you can guarantee there’s more where that came from.

Big Fish is out now via Def Jam