Ivan Ooze is on a roll. He recently supported Wu- Tang while there were down under, recorded with Ghostface Killah, released his new mixtape The 93 KFC Rotisserie Gold, followed it with a national tour and has just announced the Vibe City underage shows. We recently sat down the the Melbourne MC in-between the madness to chat about his mixtape, recording with Ghostface and bringing the hype to his live shows.

This interview can also be found on Kiss FM’s Back To The Future Hip-Hop.

You’ve dropped a new mixtape, The 93 KFC Rotisserie Gold. Where did this name come from?

Awhile ago I was a little high and was looking through KFC stuff and saw there was the 93 KFC Rotisserie Gold, which was the first rotisserie chicken that was advertised by a fast food company. It was a new thing: it was fresh, had nice flavour and all that. And I was thinking, I can sort of compare my music to this and try and make a mixtape of the chicken side of things. So I just mashed it up and it sort of just formed in that way. It has a ring to it.

Do we have a lot of songs about chicken on here?

No we actually have none. I don’t think I even say chicken in any of the songs. The Colonel hates me. *Laughs*

I want to ask you about your name, because I know it’s a Power Ranger character and he’s quiet an evil character, how did that come about?

It’s more to do with my anger, like, when I started rapping I was a pretty angry kid. Ivan Ooze is a character where people hate him but they sort of like him because he still has that charisma and is still funny. I used to watch The Power Rangers movie all the time so I took that away from his character.

So that’s more your stage persona?

Yeah for sure. If you see me on stage you kind of see my eyes popping and I look a bit scary. I’ve seen pictures of myself and I’m like, Wow! I didn’t know I looked like that.

You’ve built quiet a cult following here in Australia. How did you build up your fan base?

Pretty much just by talking to people, being on social media and responding to everybody who has a question. Trying to get around to it now gets a bit full on because I get about thirty to forty messages a day but it’s still good to just talk to everyone, and doing the videos on Facebook when they get shared around.

You were one of the first people I saw doing the videos. I definitely draw some parallels between yourself and Allday in the way you relate to your fans and how you’ve built that fan base up through social media. I think you two do it the best that I’ve seen. I think that’s very commendable using social media to its best power.

You were recently on tour with Wu-Tang which would have been pretty exciting. And I saw you did a track with Ghostface, how was that?

It was pretty surreal, especially sitting in the studio and watching him write. I already had a track that was done, so I showed it to him and he liked it, so we went into the studio and he sat down for forty or fifty minutes and wrote his verse and did the same with the recording. Then we bounced it in the car and he was down ass for it. Then we went UGG boot shopping *laughs*

One of the things that I’ve always been impressed with is your skill to freestyle. It can be rare to see someone who is able to freestyle as well as they can rap. Is that a skill you have to hone all the time?

It really does depend on what time of the day it is when you wake up and how you feel that day. It also depends what’s going on in your headspace. If you’ve got a real clear headspace I think you can do it better cause there’s more words that riddle off the top of your head. Also, I haven’t been smoking cigarettes, I can freestyle better, whereas if I smoke cigarettes I feel like I revert back to the same word.

Your style on stage is super energetic, who are your biggest influences and how have you won over some of those tougher crowds?

For stage presence I’ve been watching a lot of Flatbush Zomies but it’s more to do with how people work the crowd. I watch acts when I’m on tour and bring that to my set. I think the main people I watched was Cypress Hill and they can control a crowd without even moving. It’s crazy, they have a power. I just try to do that. I spoke to my hype man, who does back flips on stage, about how we want to make it the most energetic set that we can because I know when you go to some hip-hop gigs you can go there and you’re partying and enjoying the music but you didn’t move as much. So what we try to do is make it so you’re jumping around and having a good time but still enjoying the music. 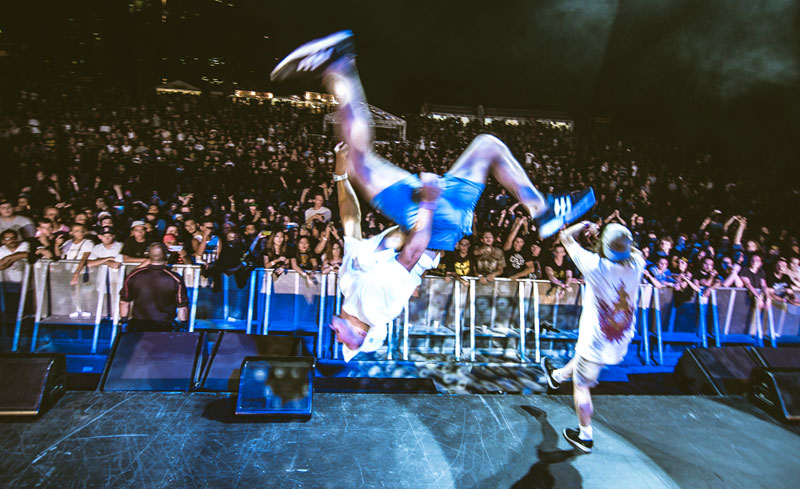 I’ve definitely seen you guys do that, two really strong memories; one was Cypress Hill which I think was one of the toughest crowds I’ve seen to win over, and also Azealia Banks.

I think to deal with those types of crowds is, that they’re only there to see who they paid to see, they don’t know who the support act is, so why should they care? But at the same time if you try to connect with them and get down to their level and go in front of them and say what’s up, and give them props or whatever, they’ll be like oh, this guy’s alright and pretty nice.

Every hip-hop act that’s out there should take that advice! I’ve seen so many that don’t take that seriously and don’t bring any energy, and are intimidated by the crowd.

Yeah you can’t be intimidate by the crowd.

So we always finish our interviews with some quickfire questions. I’ll give you two options and you just give me one answer.

Get The 93 KFC Rotisserie Gold for free download here.