Mogwai is a name synonymous with post-rock. The Glasgow band formed in 1995, during the the early days of the genre, and through experimentation, creativity and a breathtaking live show, have managed to stay dynamic and relevant for more than two decades.

Their latest album, Every Country’s Sun, was released in 2017 to widespread acclaim, sounding like only a Mogwai album could. The band’s ninth studio album, it brought a wide scope of concepts—some harking back to the first incarnations of the band—to the fore. This came as a surprise to many, as both 2014’s album Rave Tapes and 2016’s soundtrack Atomic carried a more electronic feel. Still, the return to guitar-led sounds akin to Hardcore Will Never Die, But You Will (2011) and Mr Beast (2006) was welcome, and showcased that Mogwai were never a band to wear out a single style.

Mogwai visited Australia last year for an exclusive Australian performance at Dark Mofo in Tasmania. It blew us away. Featuring a mix of old and new material (the performance took place several months prior to the release of Every Country’s Sun), the concert was loud, proud and brilliant. Now, the group are returning for a headline shows and a set at Golden Plains Festival. Ahead of their shows, we spoke with frontman Stuart Braithwaite about his writing process, and the past, present and future of the band. 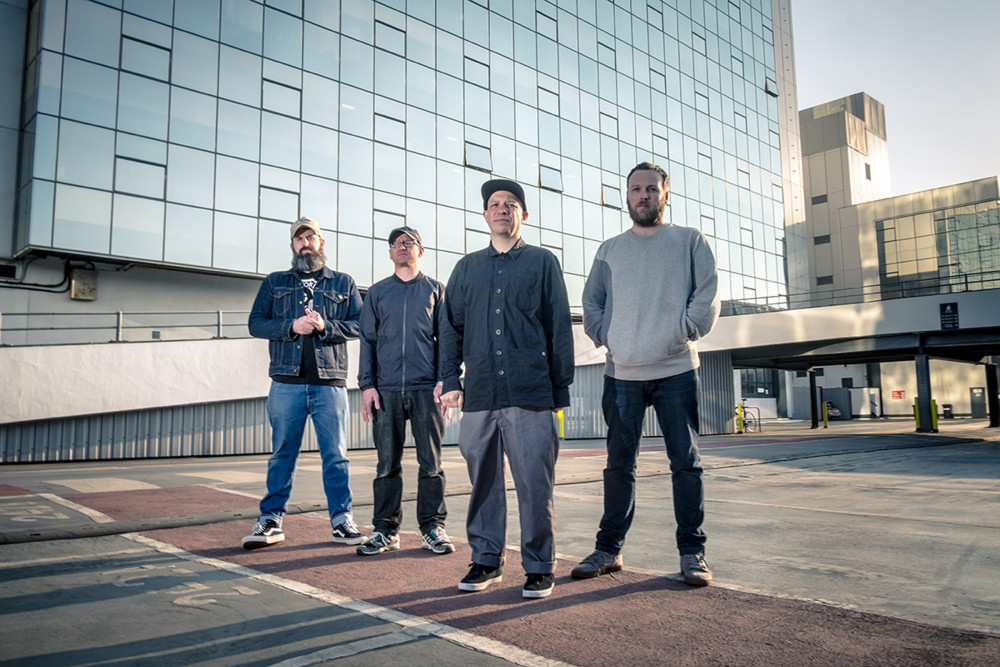 After over 20 years and nine studio albums, what keeps you creative? What keeps Mogwai going after all this time?

I think we just enjoy it. We feel very very privileged that people are still excited about our music and want to hear what we’re doing. We’ve never had any problems with writing music. In fact, we probably write too much! We’re happy where we are.

And your style varies so much, lately between guitar-driven and electronic sounds. What challenges or rewards does that experimentation bring?

I think everything has its own pros and maybe one or two cons. I think we enjoy the collaborative efforts of doing soundtracks, but it’s always good to make your own records from scratch with a blank canvas. Both are good, and pretty different from each other.

Speaking of soundtracks, you worked on Atomic and Before the Flood right before Every Country’s Sun. How did you approach those collaborative projects differently to an album?

They were both really great projects. I think they gave us confidence, we felt they both turned out really well. And obviously being asked to collaborate with Trent Reznor and Atticus Ross was a real honour – their work is amazing. I mean we all grew up listening to Nine Inch Nails, so that was a really great thing to happen. They’re so different to doing our own records. With our own, we were completely open to trying anything, and we can go out of our comfort zone. Whereas with soundtracks you work alongside the images and the film.

So working with film provides more guidance or direction?

I think so. In some ways it’s a bit of a relief to have an atmosphere to go towards. You do have a bit of guidance. But then again, I do think that having no guidance is a bit exciting as well.

Do you envision themes or concepts at the start of each album process, or does it just flow when you get into the recording?

It just flows. It’s really just how we’re feeling at the time. We literally just start playing and see what happens. It’s a fun process at times, just hilariously random *laughs*. We just see how the chips fall.

And where do vocals fit into the process?

Usually quite early these days. Sometimes in the past we’ve just thrown them on in the end to see what happens, but these days it’s usually quite evident at the start that a song will be the kind of song that needs something like that. But usually the actual vocals will be the last thing we sort out. They’re usually very last moment.

In terms of lyrics, I know that in the past, you’ve said that vocals done through a vocoder are mostly written to fit it to the music. What about songs where the words are clearer, like Party In The Dark?

It’s stream of consciousness. I still really think about how the words fit, musically, to the track. I probably think of that more than the words themselves. It helps to think of it more as an instrument, but you obviously don’t want complete nonsense. It’s probably something between a rhythm instrument and adolescent poetry *laughs*.

Do you take turns in terms of leading the songwriting? Is there a certain subsection of the Mogwai discography that are “Stuart Songs” or “Dominic Songs” or “Barry Songs?”

Yeah absolutely. We all wrote new songs for the new album, and if you knew which songs they were you would probably be able to tell, but I think they all work well together. It’s funny: the demos can all sound really different, but once we’re all playing together it just sounds like us.

You recently posted about a Kendrick Lamar concert on Instagram. How much are you inspired by other genres and styles?

We all listen to a lot of different music, I think the secret is to look at what someone else has done and try to view it through your own lens. If you try to wholesale take someone else’s craft then it might look a bit daft, but I think there’s room for looking at how someone expresses themselves and considering how you would express yourself. So I think there’s a million inspirations that pass through our heads.

When Central Belters came out a couple of years ago, I imagine a lot of people were introduced to some of Mogwai’s rarer tracks. Are there any of those that you really love playing live? I know it’s a personal dream of mine to see My Father, My King live.

Yeah, we were playing that when we were doing our anniversary shows, and I wouldn’t mind doing that again. But the issue with that is that Martin [Bulloch] hasn’t been playing with us because he hasn’t been well, and Cat [Myers], our replacement drummer, doesn’t know that song. She would kill it, but we haven’t done that yet. But we do some random older songs once in a while, which is fun.

Well you’ve got some specifically touring members in the band. How do you plan or rehearse for tours?

It’s not too bad, actually. Alex [Mackay], who’s been playing guitar, and Cat are amazing musicians. You only really need to show them how to play something once and they’ve got it. So it’s really not too intense.

After 20+ years, what do you feel when you look back to the earlier days of Mogwai?

There are things that we definitely wouldn’t do now, because it seems pretty daft. We were really young when the band started – you can’t really regret youth. Ultimately think we maybe rushed some of the records. But even though we rushed them, we went and made other ones really quickly, so I’m pretty amazed by how much actual music we’ve released. But anything I might regret, I’m still glad happened in the grander scheme of things, even though we might have caused ourselves hassle when we didn’t need to.

You were running Rock Action the whole time too. How have you found that dual role of running a label and being in a major band?

We were running Rock Action and putting out other records for quite a while before we started putting out the Mogwai records, and it was quite nerve-wracking, because you’ve got more pressure on you. But I think we’re pretty comfortable with it now, and the label is in a really good spot. We’ve got quite a lot of records coming out this year that are maybe going to be a slightly higher profile than we’ve had before. We’re excited about it. I feel starting that label was one of the best decisions we’ve ever made.

So what’s next for Mogwai? Anything big on the horizon?

Yeah, we did the soundtrack for a film called Kin, which we’re working on the soundtrack album for that. That should be out in August. Other than that we’re just keeping busy doing shows.