Dylan Joel is bringing a new flavour to Australian hip-hop. Mixing acoustic melodies, soulful singing and lyrical dexterity, the MC, singer and song writer has catapulted into the music industry after releasing his debut album Authentic Lemonade. Currently on his second headline tour, Dylan is giving his audience a refreshing and authentic sound with his acoustic guitar and catchy hooks.

Teaming up with the ladies at KissFm’s Back to the Future, we recently had a chat with Dylan while he was on the road to discuss all things hip hop, what sets him apart from his peers and tour life.

I know you’re just about to go on stage, where are you tonight?

Fantastic. And how far along are you on your tour at the moment?

We are five shows deep I think. And we have five more shows to go.

How’s the crowd response been on this tour?

So good! The vibe has been awesome and it’s only the second headline tour we’ve ever done. For me, I was kind of nervous about it, I was like, are people even going to come? You know, I’m rocking up at cities that I don’t really know anyone in and hoping people will come, but it’s been awesome. Everyone who’s come so far has just been there for good spirit and have really appreciated it.

You have, or you have in the past, had some acoustic kind of stripped back versions of songs in your set. Are you doing that again in this set? And if so, how has it been received?

Yeah we’re definitely doing that in this set. We’ve probably had more acoustic guitar in this set than we ever had before, which has been awesome. It’s funny, we’re playing a brand new song that’s acoustic, or mostly acoustic and that’s been one of the biggest songs in the set so far. I’m really stoked on that and people are really loving it. It’s weird too, sometimes I watch social media and watch back on what people have been filming and without a doubt most of the time if people film anything it’s always the acoustic songs. They’re kinda of like, screw the rest of the set we just wanna watch him play guitar! So it’s been received super well.

I think for you it’s a point of difference and what sets you apart from other Australian hip-hop acts.

The hip-hop culture itself is known for innovation, so it’s important to be able to bring something new to the table and a new element and a new idea or a concept. That is so much what hip-hop is based around.

What I’m really liking seeing you do lately is the live feeds on Facebook. Is that really important to you to be available for your fans and really show that authentic side of who you are as a person?

The Facebook live thing has been so cool because it’s giving people a chance to get to know me outside of the music. You know, you jump on stage and you perform and you play your songs, and they hear you recorded but there’s so many elements amidst that. So I think it’s really important and for me it’s been awesome to chat, talk about whatever and answer people’s questions on there.

How important is it to have grounded people around you? Is that something you’ve consciously strived to do or do you just attract those kind of people?

I think it’s definitely a bit of both. I think you definitely attract what you project, so I feel like the people that are around me now I see a lot of myself in, which is really cool and special. And I guess that’s why you get along with the people that are close to you, but it is really important. I mean when you’re on the road you spend so much time with these people and you can be in kind of high stress situations. So many things go wrong with every show and you can kind of be at each others throats, so to have people that are really similar to you, to be able to deal with things in the same way and have the same morals and the same priorities is really key. I think I’m super lucky I have such a rad team that are all really inspiring people in their own way and that’s definitely shaping me. 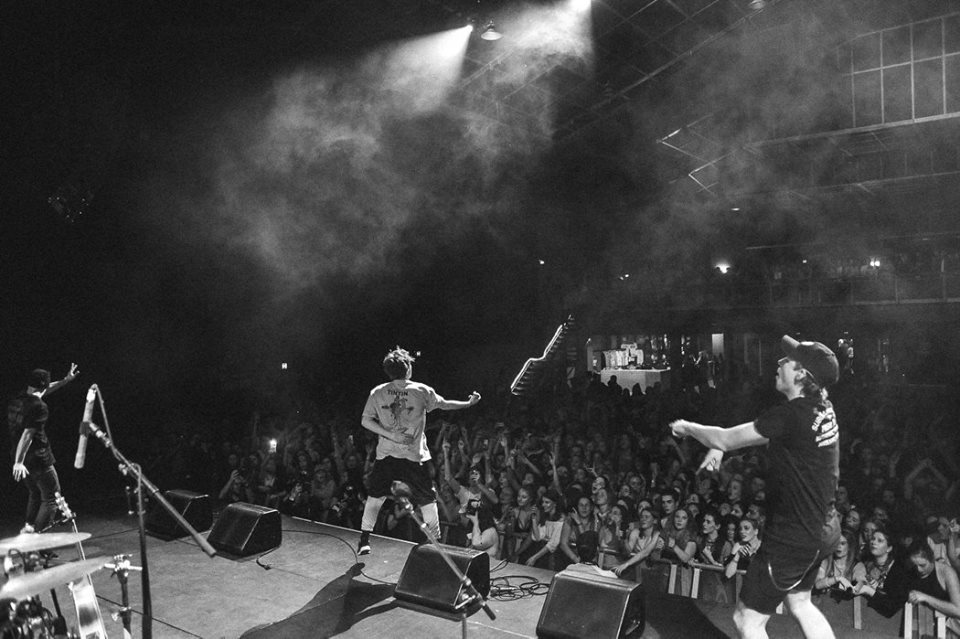 Who are you listening to at the moment? Who are you feeling and who are you influenced by the most?

There’s quiet a few people at the moment. It’s so funny, I’m listening to more Kanye than I’ve listened to in a long time, probably ever. I’ve always listened to Kanye’s stuff, but more recently I’ve become more of a fan and I’m starting to really understand the depth of his talent: he’s creatively genius. So many people just hate people for saying that, but that’s because they can’t see past some of the the flaws in his personality, but creatively he’s a freak. But definitely two of my favourite rappers for sure would be Vic Mensa: he’s just doing stuff that hasn’t been done before on a whole new level and definitely Chance The Rapper. That guy’s the definition of genuine, so I got a lot of love for those guys.

You’ve been doing a lot of touring, are you at a stage now where you don’t have to be doing a job on the side?

Yeah that kind of only just changed about two months ago; I was doing youth work three to four days a week. And then about two months ago I got to the point where music was too busy and I was doing an average job at my youth work job and I was doing an average job at music. So I was like, I’ve got to make a change, what’s my priority right now? I’ve been doing youth work for awhile now and I still love it but I was like, if I’m going to give music a shot I’ve actually got to give it a shot. So, I ended up quitting and I’ve just been doing one day of youth work a week but the rest is all music.

Who have you got your eye on in terms of the Australian scene right now?

Honestly, there’s so many, it’s such an exciting time for Aussie hip-hop. There’s so many people making crazy stuff that’s new, innovative and unique. I’m just so amped to be involved in that. Specifically though, one of the dudes that hasn’t released a whole lot but a little birdy told me he will be fairly soon, goes by the name of LTC in Canberra. There’s something he’s got that’s real crazy and I’m pretty amped to see what he puts out. And then I feel if anyone really digs Australian hip-hop and they’re talking about people that are exciting, it’s definitely Remi and Sensible J; they’re always doing new stuff that hasn’t been done before out here and I think they are definitely paving a way for everyone else to able able to go out on a limb and try something new.

I think another one that’s on the House of Beige label is Man Made Mountain, who are on tour as well.

Oh word! Thank you for saying that because they’re on tour with us right now and I haven’t seen them play live before, so last night we played in Canberra and I watched the whole set. I just snuck out into the crowd, the shit they’re on is next level. I’ve never actually seen anyone look so effortless and chill and calm and spit so hard so calmly. It’s just the weirdest thing. They’ve got so much groove, so much talent. Definitely go watch Man Made Mountain, they’re next level.

Now we always end our interviews with quickfire questions. I’m going to say two things and you’re just going to pick one of the things that I say.

Ahhhh, no! This sucks! I’m gonna say… Nah I don’t have an answer because I would say vinyl if I had a choice to bring a record player with me everywhere I go, but that’s not possible. I’m going to have to say digital because then I wouldn’t be able to listen to music everywhere I go.

Vic Mensa or Chance The Rapper?

Funnily enough I had that prepared before you said they were your two favourite rappers.

That obvious hey! Umm, I’m going to say Chance. I think I like where his heart’s at a little bit more.

And last one, stage or studio?

Damn, these are so tough, that’s such an annoying question cause stage is fun, and you get to connect with people in person, but I don’t like being up the front all the time so I’m gong to say studio.

Thank you so much, really appreciate your time Dylan hope you have a great show tonight.

Thank you so much, thanks for having me!

Catch Dylan in a town near you and cop his album Authentic Lemonade here.