Emojis. They are in indispensable part of our keyboard lexicon. Without them, we’d be lost. That passive aggressive text telling your roommate to clean up his dishes would look a lot sassier if it were not tempered by a smiley face.

Considering that 75 percent of information is communicated by non-verbal cues, its no secret why celebrities would want their own brand of emojis. The latest person be immortalised in text? Why none other than The Game.

Following in the footsteps of other rappers Lil B and Cam’ron, the Compton emcee has partnered up with Moji Keyboard App for iOS to release 100 custom emojis he helped design. He’s been busily posting away some of the emoji designs on his Instagram.

They don’t want me to have my own emOGi’s 🔑 CLICK THE LINK in my bio NOW & use my @mojikeyboard in your texts !!!!!!!!!! Once you got yours post your favorite one & hashtag #TheGameEmOGis so I can show ya page love

The collection includes a woman pole-dancing, a tribute to his hometown Compton, and even an emoji of infamous drug lord El Chapo on the run.

You can use the hand signs for ‘on fleek’ and ‘thot’, covers for The Game’s albums and disturbingly dogs having sex. Not sure if we’ll be using that one too often, though.

Also included are emojis of The Game’s manager beating the crap out of rapper Stitches, a not-to-obvious reference to their ongoing beef and the boxing match Stitches challenged him to.

They don’t want me to have my own emOGi’s CLICK THE LINK in my bio NOW & use my @mojikeyboard in your texts !!!!!!!!!! Once you got yours post your favorite one & hashtag #TheGameEmOGis so I can show ya page love

Hell, there’s even an aubergine morphing into a penis in a reference to that photo of The Game getting his goods out (clothed in underwear of course) for the camera. 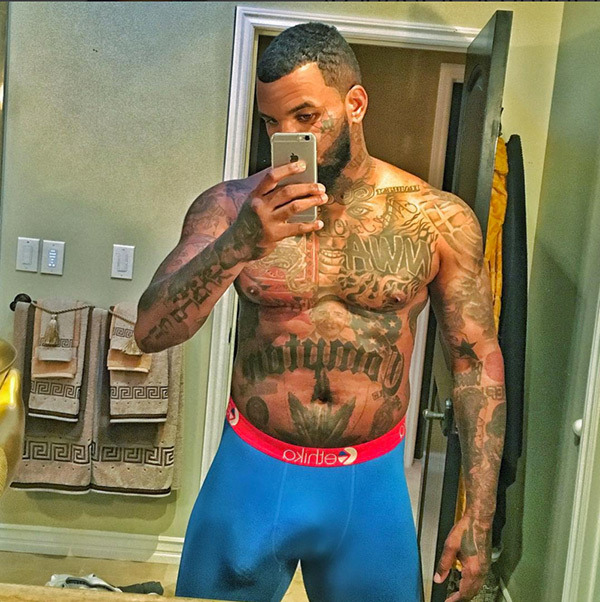 The Documentary 2 rapper has hinted that other emoji companies may have turned him down initially, saying in his Instagram, “They don’t want me to have my own emOGi’s,” which also references one of DJ Khaled‘s many now incredibly popular (for some reason) catchphrases,

According to a press release from Moiji, “The Game’s new collection, available exclusively within the Moji Keyboard App for iOS, features nearly 100 custom emojis The Game helped design.”

“Throughout the creative process The Game made it a top priority to incorporate the L.A. culture which he grew up in. This new collection is a direct reflection of what The Game felt was missing from the existing emoji icons we have all become accustomed to using, with a bit of West Coast flavor added in.”

It’s the second time the company has collaborated with a major artist, partnering with Fabolous to release his YoungEmOGis collection.

Ever since Kim Kardashian launched her Kimoji has an entirely separate app, celebrities alike have been capitalising on the promotional value of their own personalised emoijis. At its peak popularity, Kim’s app was selling at 9000 downloads a second.

The Moji app is available to all iOS devices.