For some musicians, it would be a significant challenge to retain humility after experiencing the whirlwind of 2015 that swept up Oxnard, California native Anderson .Paak, and thrust him into the global spotlight. Hand picked by none other than legendary rap stalwart Dr. Dre to appear on the star-studded Compton, the world is now all too familiar with the gritty, sensual and multi-faceted stylings of this immensely talented artist.

After grinding away in the business as Breezy Lovejoy early on in his career, .Paak stayed true to his craft, and ensured that the music was always front and centre despite the hardships life threw his way. A sudden retrenchment would lead to homelessness for his young family, making the position he finds himself in today all the more impressive, and a testament to the talent and humble nature of someone so young.

Capitalising on some much overdue attention, Malibu is Anderson .Paak’s latest musical triumph; an album which reflects his jazz infused persona, and serves as a beautifully crafted record (read our full review here.) I was lucky enough to chat with the man himself in the wake of his album launch, discussing everything from his surreal rise to stardom, to his mum putting him on blast and comparing him to Kendrick Lamar.

You’ve been performing for years now, but last year was obviously a crazy time for you. What’s the biggest lesson you learnt after the whirlwind that was 2015?

Really just that hard work pays off man. Sometimes it takes a while for these seeds to grow into a big, full-grown tree, but you’re talking about a tree man, it’s going to be around for years and years. It’s not just going to grow overnight, and that’s what I want. I just want one of them big ass oak trees you know? That’s what I realised, some of the shit that happened is the product of shit that happened to me three, four years ago. That’s wild to be just hanging around in that way. It’s a while to just try and stay afloat, and still be trying to put out music.

But the payoff? How do you tell someone “Well, you’re going to be on Dr. Dre’s album in four years if you just keep going” you know? On what would be his last album? That’s some crazy, storybook type of shit. I would never think that in a million years that I would’ve been able to get on that project. So the biggest lesson I learnt man? You’ve gotta put in that time and trust that that shit’s gonna happen, and you’ve gotta develop some kind of routine, some kind of work ethic, and just to focus on it.

Malibu is an album with so many different sounds and artists. You’ve got everyone on the record from The Game, Rapsody, to Schoolboy Q. Was it hard merging their styles with one so unique as yours?

I think we’re all like minded, and I think a lot of people I collaborate with, a lot of times they haven’t had a collaboration like this in a while where they’re doing these kind of songs; the style is foreign to some of them, but familiar. I think when they’re excited to work, we end up creating something that both of us have yet to experience.
I think the key example of that is with The Game, I can’t really remember the last time he spit some content like that, I know he has before, but I feel like people kind of stretch out and it’s awesome. I wouldn’t expect Q to jump on the beat that he got on, so it’s a little out of the norm, but I was excited to collaborate. The last album I did I had no real features. I love meeting different artists, and working on stuff at this stage in my career.

It’s definitely not often you hear The Game rap about a female-induced bullet hole to the heart, but on the album it still feels believable…

Yeah definitely man, it’s refreshing. But he still has the edge on it, and it’s one of those perfect kind of rap features you know? You know every word to it.

Soul and jazz are really having a renaissance within hip-hop right now, how excited are you that these genres are making such a massive mainstream comeback?

I’m glad that the way that things have come around, and I’m in front of it this time. I feel like for one time I’m in front of the pendulum, because the other times I’ve been just a spectator. You know when you see kids playing jumprope? They’re waiting on the side, and they’re waiting to hop in, but they’ve still got to keep their momentum before they hop in, that’s what I’m doing. So this time around all this other shit has got time to play out, and now everyone wants something different, just another texture to be considered, and I think that’s exactly what’s happening, and I’m glad to be putting out stuff that’s being added into that conversation. That’s what I want right now.

I remember listening to you on a track three or four years ago with Dumbfoundead. He switched up his name and re-branded as Parker; now he’s switched back. As someone who’s made a name change themselves, how hard is it to completely reinvent yourself as an artist?

I think it is, but you’ve gotta commit if you’re gonna do it. In this day and age, we’re doing artist development in front of the audience. It used to be like a fine tuned machine with artists, where they didn’t come out until they were ready, you didn’t put no records out until you were absolutely ready. You’d go through this whole schooling, the whole nine. The Motown machine? That shit was finely tuned! Nobody just throwing out records. You know who was the beginning of that? Stevie Wonder. He went through his little thing, but you don’t really have that no more.

Some artists, they do it in front of the audience, and some of them just wait, they go through all these different changes, there’s a few people who are huge stars now who have gone through the same thing. But whatever happens, once you do it you’ve just got to commit, and that’s what it was with me. I battled with it too. Like damn, I didn’t want to do it, I thought I had put too much time into the other name, Breezy Lovejoy, and I didn’t understand. Honestly I was just like “Alright let’s do it.”

I had a mentor at the time, Brian, who was the first one who really brought up the idea of changing it. I had thought about it, but it started becoming more prevalent that maybe I should try to change it just because I had already put six, seven years in with this name, and nothing was sticking. The last thing I thought about was the name you know? Not to say that it was the be all and end all to the transition, but it’s fucking funny. I changed my name in 2013 I think it was? Three years later, I’m with Dre, you know there’s a lot of funny shit that’s happened in three years, and I think it was the culmination of that and the biggest thing which is the music. The proof is always in the pudding, and that’s what it is. The name? Whatever, man. I think I could’ve stuck with the name but it was a part of the whole transition. I had all this new music, I’ve got a family now, I’ve got this transformation now in my heart, and I wanted to reflect that.

Detox was really one of those projects that became an urban legend and a myth. Were you someone like me who was anxiously awaiting it and thinking to yourself, “Nah, nah it’s going to come out!” Only to then end up on the album that replaces it. That must be surreal…

It’s absolutely nuts. I’m the same way, with that album I was thinking “Yo, that shit will drop! And when it drops, I’m going to listen to it” That’s all I ever thought. It’s like that with Kanye too, there’s always going to be people you’re going to listen to, no matter what people say you’re at least going to listen to it. They at least know what’s up. I never thought “Okay, I’m gonna be on it (Detox/Compton), that was nothing that really crossed my mind, it was so far fetched.

We did some digging on your Instagram and found a gem of a post from your mum praising Kendrick, it looks like you got the last laugh now that you’re on an album with him…

Damn, that’s some good digging, that’s hilarious. That was after the Control verse! She blazed me! Yeah dude that shit is hilarious, I definitely got the last laugh on mum. 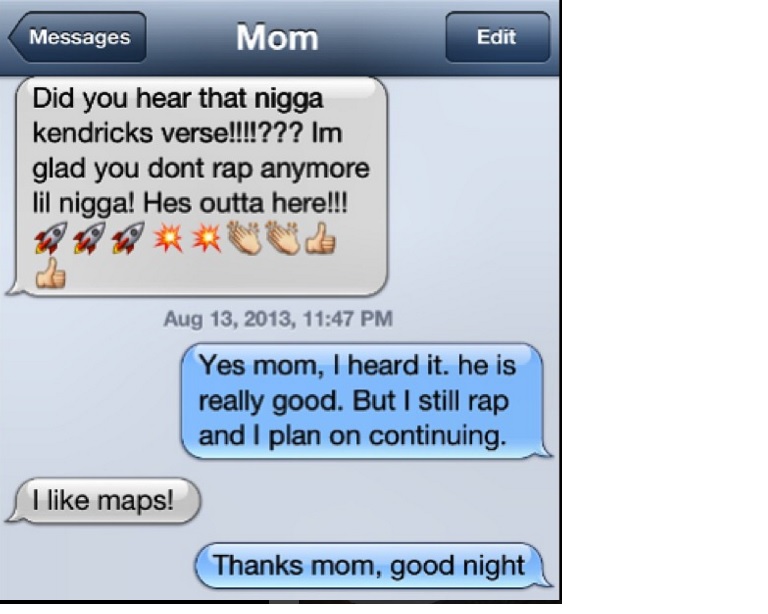