The album itself was already tasked with following past Dr. Dre projects such as The Chronic, and expectations were already sky high.

Sadly, the weight of these expectations proved too much. Detox was viewed as a punchline, the butt of any joke in terms of a delayed release; the musical equivalent of “when pigs fly”. 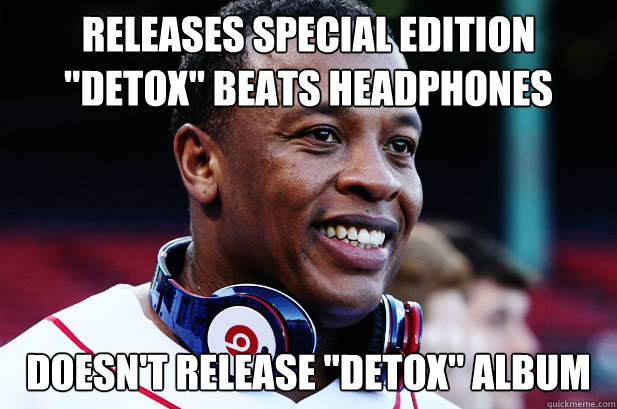 With the release of Compton, and the promotional wave that accompanied it, Dre officially put the rumours to rest and killed off the project. The general consensus was surprisingly not one of shock, but of relief. At this point we all knew that the album had been lauded as a masterpiece even before release; what kind of project can live up to those expectations? Thankfully, Compton has blessed us with a fantastic set of tracks in the absence of Detox, but that doesn’t stop us from looking back at a couple of the tracks that managed to sneak into our hands, giving us an idea of what we might have been in for in an alternate universe.

Kush is a song indicative of it’s time. Snoop Dogg still had some credibility in the rap game, before pissing everyone off, and could string together some clever lyrical content, (before he went off and made songs with David Guetta). Akon provided the hook, and if that doesn’t scream how easily you can identify the time period of the song then I don’t know what will. The song itself is very radio friendly; I mean what song about marijuana isn’t these days? C’mon. Kush was not supposed to be released, as an unfinished version of the track managed to leak. Instead of sweeping it under the rug, Dre embraced the leaked, promising to speed up the production process of the album and double his efforts. Heck, he even produced a video for the song:

With tracks like Kush, we started to get some idea of where the album was headed. Was it the hardened N.W.A style we were accustomed to? Far from it.

Syllables is one of my favourite tracks, and not just in terms of the context of Detox. Here is a track that features Eminem, Jay-Z, 50 Cent and Dr. Dre, rap spitters at the peak of their powers providing a hilarious tongue-in-cheek examination of the music industry. I urge you to listen to this song, especially if you’ve ever thought that your favourite artists make radio friendly music because they are “untalented”. They know exactly what they’re doing, and as 50 so bluntly puts it, “Sunny, bunny, money and funny. You ain’t even listening and I just took your money”.The song itself has never been given a proper release or a mastered version, so horrible YouTube quality will have to suffice:

I Need a Doctor is yet another radio friendly smash, and with the mainstream success and airplay the song had, it’s a surprise that Detox never saw the light of day. The sales would have been astronomical, but perhaps Dre knew that it was never going to satisfy the hip hop fans that were salivating over the release. The track provides an interesting back and forth between Em’ and Dre, an insight into the relationship that the two have had and the astonishing run through the music industry that they have shared. I’m sure you sang along in the car as the radio played this song to death “I neeeeeeed a doccccctor”. Don’t deny it. The music video has more than 200 million views for crying out loud:

Let’s face it. Detox was never going to live up to our expectations. We set the bar high and perhaps we are to blame for never seeing the finished project. What we are left with is a smattering of singles; tracks that gave us an insight into what the sound might have been like. All we can do now is relish in the music we have been given, because Compton is one heck of an album. Let’s just hope the next album isn’t crushed into non-existence.