Not long ago, I came across an interview with one of the employees at the first ever McDonalds in Germany (stay with me here, I promise this is relevant). What interested me about the interview was his description of how completely alien the American service culture was in Berlin at that time. Training was entirely based on the now universal foundations of the service industry; “the customer is always right”, and “service with a smile”.

These ideas are so totally familiar to us now, but in 1990s Germany, it was unheard of. Restaurants in Berlin at this point were capricious establishments, where customers were deemed worthy of service (or not) by the wait staff. The interview tells how you might walk into an empty restaurant only to be told by the maitre d’ that they had no tables available. Food could take hours, quality was what you were given, and there were certainly no smiles. The customer was barely recognised, let alone allowed an opinion. 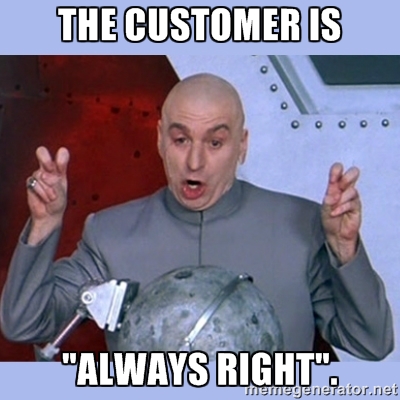 But this same interview went on to discuss how the advent of what is usually known as American service culture, flipped the dynamic between employee and customer so completely, that it is now in reverse. Today, employees are subject to the whims and aggressions of customers, who are so entrenched in the belief that they have the upper hand – also a belief in their entitlement as consumers.

And this is where I’ll start talking about music…

You could easily draw a parallel between this power shift, and that between musicians and fans. Born out of the beginnings of popular music in the twentieth century, the concept of a “fan” has slowly evolved. You would be hard pressed to find someone who is not familiar with the images of fainting girls at Elvis Presley concerts, or screaming hordes waiting for the Beatles. The incredible appetite for music, and to share the experience of it, in the 1950’s and 60’s, sparked the idea of an adoring fan. 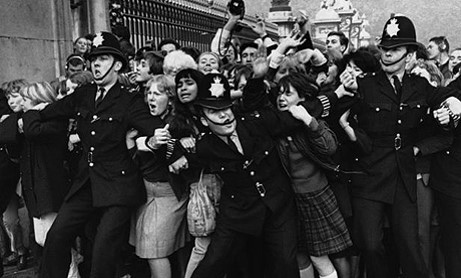 Possibly, the simplicity of the musical experience allowed for this perception. As a music fan, your options were limited to purchasing recorded music (physical copies), live shows and potentially magazine features – or a fan club subscription if you were lucky. Musicians were distant, highly inaccessible icons. An autograph was the ultimate badge of fandom.

Fans developed their own mythologies in lieu of actual information, and they were also driven by a fairly new sense of consumerism. The 1950s saw the emergence of the “teenager”, children who had known the deprivations of wartime were attaining their independence just as those restrictions were fading to be a thing of the past. Throw this at the options available to music fans, and they were eagerly buying into those limited outlets; purchasing records and concert tickets.

Like the service industry, musicians and fans exist in co-dependence. Yes, a musician can make music alone and no one need ever hear it. However, in the industrial sphere, musicians need fans to consume their product, but the artist is equally necessary to create fans. It’s a classic chicken and egg situation, and throughout most of the twentieth century it was the musicians who seemed to hold the power.

But somewhere along the line the dynamic started to change. Punk has been held accountable for some part of this shift in the relationship between artists and fans. While pop and rock held the two separate, and set up their proponents as godlike entities, punk exported a very different idea. The worst thing you could do in punk was to be passive; artists invited any involvement or reaction from fans – even contempt. Followed by the rise of rap and hip-hop, the concept of music that came from the streets saw musicians relating more closely to audiences.

At a certain point, the awareness shifted and now we see an industry where it is the fans that hold sway. That certain point can arguably be traced to the moment when the digital world took over. The ongoing struggle to find profit in today’s music industry is pretty well documented, despite the fact that consumption of music is unbelievably high. Couple this with the power of social media over our world, and conditions are ripe for a complete power shift.

Instances of crazed or aggressive behaviour by music fans is hardly new. From stalking and restraining orders, unhealthy obsession right through to murder, fans have often fixated on and targeted artists. But we are definitely seeing a much more demanding fanbase today, where musicians are held accountable rather than simply idolised.

Even just a quick internet search brings up a wealth of news items relating to irate music fans.  Lawsuits to sue for poor performances, threats and demands for new material and announcing boycotts over minor grievances. Twitter teems with disgruntled commentary, ranging from simple complaints right through to disturbing rants. Digital age artists expend so much effort on really connecting with fans through social media, but if that relationship turns sour, they are left right in the firing line.

And it does seem that music fans have developed their own sense of entitlement. Decades ago, the most you would have asked of a musicians was a decent record and a run of accessible live shows. Now, fans are making more and more demands on artists – from both a professional and personal perspective. And sometimes, musicians just can’t win.

Distraught One Direction fans were even heartbroken at how quickly Zayn Malik released his solo music, although grief stricken at his departure, they still blamed him for moving on so quickly! Sia, who is famed for her shyness and mystery, is being sued for not being personable enough. Constant demands for songs and shows can quickly turn bitter, as fans will not hesitate to tear apart and criticise what they were so desperate for. I dread to think what would have happened if Frank Ocean’s Blonde hadn’t lived up to expectations…

In the same way that cyberbullying is often attributed to the ease of abusing someone from a distance, or anonymously, you have to wonder if these “fans” would be able to deliver the same criticisms face to face with musicians?

While this digital sphere makes artists more accessible than ever, the industry itself also plays into the fan’s hands. Streaming services are providing millions of listeners with essentially free music, often devaluing the product in consumer’s eyes. And at the same time, money can now buy everything. Artists like Beyoncé and Kanye West might have assumed the godlike roles the rock stars formerly held, but with the right balance on your credit card, you can buy time with them. VIP packages allow anyone with enough money access to these artists, and although the cost is high, it once again devalues what was once so unattainable.

It’s an interesting time where demand on musicians is so incredibly high, but the majority of fans are not quite matching that with either financial or faithful emotional support. Right now, where music is concerned, it seems that the customer is always right, and music is as easily consumed and as disposable as fast food.

I admit, I am generalising. “True” music fans do still exist, but the trend certainly seems to lean towards a fanbase which is harder to please than in previous times. Of course, social media is awash with messages of love and support for artists, and audiences still turn out in vast numbers for live shows, but how quickly could that love to turn to hate? And what small dissatisfaction would it now take to turn that support into abuse?