This week marks twenty years since the death of Tupac Shakur, one of the most enduring and influential rappers of all time. In the two decades since his assassination, endless conspiracy theories have sprung up about whether or not he’s still alive, and if not, who shot him (Read more about musical conspiracy theories here).

Released posthumously just two months after his death, Tupac’s 5th and final album, The Don Killuminati: The 7 Day Theory, was put out under the name of an alter ego he had already introduced on All Eyez On Me, Makaveli. The release added fuel to the theory that Tupac had not died and would instead continue to release music under the name Makaveli following The 7 Day Theory. The album itself was noticeably darker, with a kind of urgent sombreness to it. Written, recorded and mixed in just seven days, he captured a kind of frantic, manic feel, and to this day the album is crucially canonical for hip-hop. Even in death, the alter ego ensured that he was leaving behind an altogether provocative – and for some, threatening – legacy in tandem with his Tupac releases.

While time has proven that there Tupac has indeed died, and that there’s no more to come from a reinvented Makaveli, the album itself proved a study in the art of creating and cultivating an alter ego – an exercise musicians of all genres have engaged in. From 19th century composer Robert Schumann’s three characters to Beyoncé’s Sasha Fierce, alter egos have allowed musicians to explore other parts of themselves and their art for centuries.

Both a critic and a composer, it has been said that Schumann created two alter egos who informed his music, though he wrote as a critic championing the young composers of the Romantic era under three names in total. The two vastly different characters allowed him to explore different aspects of music his own. The first, Florestan was Schumann’s extrovert: exuberant and utterly passionate, he was characterised by a quickened, somewhat frenetic pace. The second, Eusebius, was his introvert: a more considered and soft tone, he allowed Schumann a more lyrical and contemplative approach. Though they informed his writing well before his music, these two alter-egos no doubt represented and tapped into different aspects of Schumann’s art. He used these two characters to separate his thoughts as a critic, as well as to explore different sounds and emotions through his own compositions. Indeed, just as it is safe to assume he wasn’t the first musician to create one or more alter egos, he certainly wasn’t the last.

One of the most iconic and one of the first to spring to mind is none other than the late, great David Bowie and his alter ego Ziggy Stardust, who was introduced on the singer’s fifth album, The Rise and Fall of Ziggy Stardust and the Spiders from Mars.

The chart-topping album followed the antics of Bowie’s bisexual rock-star extraterrestrial, Ziggy Stardust, the most famous of his many personas. Through the cultivation of such an extraordinarily out-there character, Bowie was able to delve into themes of sexual exploration and social commentary, further sparking conversation surrounding Bowie’s own sexuality. The album, while met with controversy has since been heralded as one of the greatest records of all time. A seminal work not only for Bowie, but for those to come after him.

While Bowie and Ziggy Stardust, like Schumann and his two alter egos, are relatively easy to differentiate between, the lines can sometimes become blurred between artist and alter ego. Take Eminem, a rapper who has taken things further than having a few different stage-names. He has created entire personas for albums and uses them to explore themes and styles.

The late 90s introduced us to his alter ego, Slim Shady in all his violent aggression –  a character who went places Eminem couldn’t and who gripped the attention of the music world so tightly it was often difficult to separate the character from the creator. The lines between Slim and Eminem because blurred and almost undecipherable to the mainstream media, who famously demonised Eminem from early on, and refused to let go. His Slim Shady persona was so well defined, so memorably vulgar and polarising that his 2002 album The Eminem Show referred directly to the strength creating a character – or more than one – can have, whether positive or negative.

Having seemingly moved on from Slim Shady, the lead single from the album is Eminem lamenting, however humorously that he’d “created a monster, ’cause nobody wants to see Marshall no more/They want Shady, I’m chopped liver.”  A sentiment that was echoed over ten years later on Monster – his Marshall Mathers LP2 collaboration with Rihanna.

While Eminem wrestled with finding some kind of balance between himself and Slim Shady, other artists were going ham exploring fully formed alternative identities from album to album. It often happens to aid the identity of a full concept album, either one exploring a particular story or theme, such as Alex Cameron‘s new album Jumping The Shark in which he portrays a washed up celebrity has-been.

Emo icons My Chemical Romance have adopted various themed personas in efforts to play out different concepts. Creating two fine concept albums in Welcome to the Black Parade and Danger Days: The True Lives of the Fabulous Killjoys. The first album a rock opera of kinds, focused on the story of a dying cancer patient a they sought out redemption and revenge before death inevitably came for them. The later album’s concept was that of a gang of rebels living in a Blade Runner referencing post-apocalyptic California as they each undertook the characters of their Killjoys alter egos: Party Poison (Gerard Way), Jet Star (Ray Toro), Fun Ghoul (Frank Iero), and Kobra Kid (Mikey Way) – all of whom can be seen across the music videos the album produced.

Another common use for alter egos is to introduce fans to a vastly different musical style, attitude and often, appearance, of an artist. This is particularly prevalent in pop music, in which artists reinvent themselves, often from album to album.

Pop singer Christina Aguilera underwent a transformation for her 2001 album Stripped, fully committing to her alter ego Xtina culminating in tattooing the name across the back of her neck. The album opens with “waited a long time for like, feels right now/allow me to introduce myself” as she does away with her sweet, bubblegum pop persona in favour for a more empowered, bold sound and attitude – perhaps no better illustrated than in her single Fighter. It’s a method that has served Aguilera well throughout her career – while Xtina was the first and arguably the most finessed of her alter egos, she has immersed herself fully into a new character come each album. She introduced Baby Jane (based on the character from the 1962 movie Whatever Happened to Baby Jane?) in 2006 following a couple of years of embracing a more retro-aesthetic. The single Candyman and other singles off the album cemented Baby Jane’s big-band-goes-mid-2000s-pop niche. 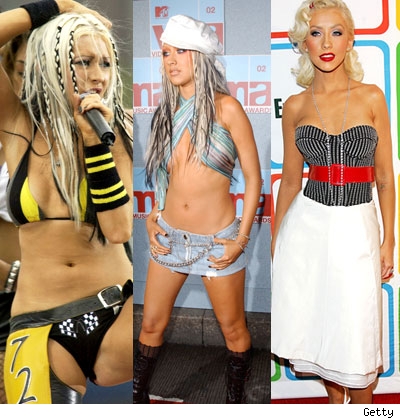 The many looks of Xtina. Image: TMZ

Beyoncé too, has played her hand at establishing an alter ego, most notably when she gave her more sensual, aggressive on-stage alter ego Sasha Fierce an entire album. On I Am… Sasha Fierce, Beyoncé didn’t hold back, demanding attention and equality within a relationship and pushing ultimately controversial (think the conversation surrounding whether or not Single Ladies is a feminist anthem) content into the limelight. As time has gone on, Sasha Fierce, whether or not she remains a part of Beyoncé’s creative process, has informed the singer’s work, the strength and “take no shit” attitude she promotes evident even in her most recent work.

One of the most fascinating aspects of musical alter egos is that they are prevalent throughout every style of music around. Look at metal bands like Gwar and Slipknot, who have built entire careers around masked characters and dramatic, often gruesome costumes, with matching lyrics, interview footage and so on.

Another practice we’ve seen occur increasingly often of late has come from artists introducing their “real selves”, as though implying their previous output had adopted an identity. The latest example of this is Chet Faker announcing that he’ll now be releasing music under his real name, Nick Murphy, as if Chet Faker had been a separate identity. Lady Gaga just announced a new album titled Joanne, which is her middle name, and Young Thug just released music under his own real name, Jeffery. While these changes don’t indicates a fully formed alter ego, they nevertheless employ similar techniques to comfortably and easily shift their music into a new space with a new identity.

This practice of creating and exploring a character in order to explore different aspects of one’s musical output has endured in the time since Schumann’s death. Artists can see the value and freedom in having more than one persona when creating their art, with many turning to an alter ego in order to produce entire careers and concept albums. A clever and creative way to not only express oneself in new ways, but to keep musical output dynamic and ever-changing, it’s one of music’s most interesting tools across almost every style imaginable.