Westside Gunn emanates old-school New York hip-hop; his vibe and flow are reminiscent of Planet Asia and a mellow Ghostface, and are perfectly matched with everybody’s favourite foodie Action “Bam Bam” Bronson. Which is exactly what we have here on the Alchemist-produced track Dudley Boys, a reference to the professional wrestling tag-team of the same name and look. The track feels like a cypher freestyle, over a cinematic beat. 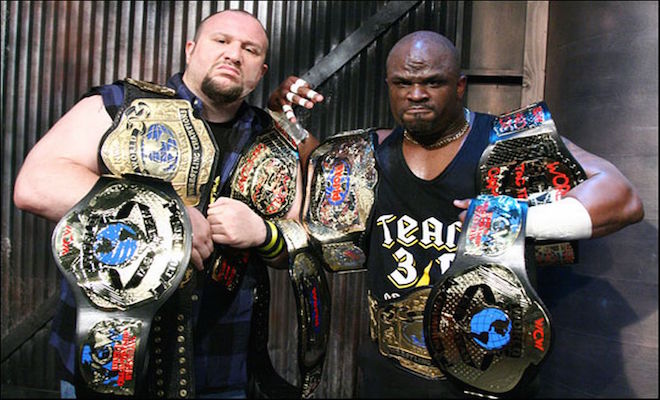 Compare this photo to the one above. Image: http://wrestlingrumors.net/

Westside Gunn is quickly becoming one of the ‘must watch’ MCs of 2016 since he popped up on the hip-hop scene last year with his Hitler Wears Hermes mixtapes, and dope projects with his blood brother Conway, Hall & Nash and Griselda Ghost. Gunn is just pumping out the projects, with so many EPs and mixtapes he is more than ready for a full length LP- and so are fans. Dudley Boys is to feature on Gunn’s upcoming full-length FLYGOD which is set to drop on March 11.

“I feel like this album is art, a modern classic, every beat, every bar, to the features, all the way down to the skits,” Gunn said about his Roses Are Red… So Is Blood project. “It just gives you that feeling back, the golden era but in 2016.”

In addition to featuring Bronson, FLYGOD will also feature appearances from Danny Brown, Skyzoo, Roc Marciano, and Your Old Droog. Pre-order it on iTunes before it drops.