You know there’s something wrong with a dude when they brag about getting their very own pen at a federal court hearing, like it makes them “the king.” Not to mention leading a pharmaceutical debacle that brought him to said holding pen, involving inflating the prices of much needed medical treatments for cancer and AIDS – past the point of what even the most sociopathic greed magnate would consider decent.

And that is just the beginning of the litany of failings that brought “pharma bro” Martin Shkreli to the world’s attention. Few people in the history of the world have managed to attain such a status of universal disgust; even Donald Trump is down on Shkreli, labelling him a “spoiled brat” and a “disgrace,” though that might just be because Shkreli is a very real threat to Trump’s current position of most awful man in America. 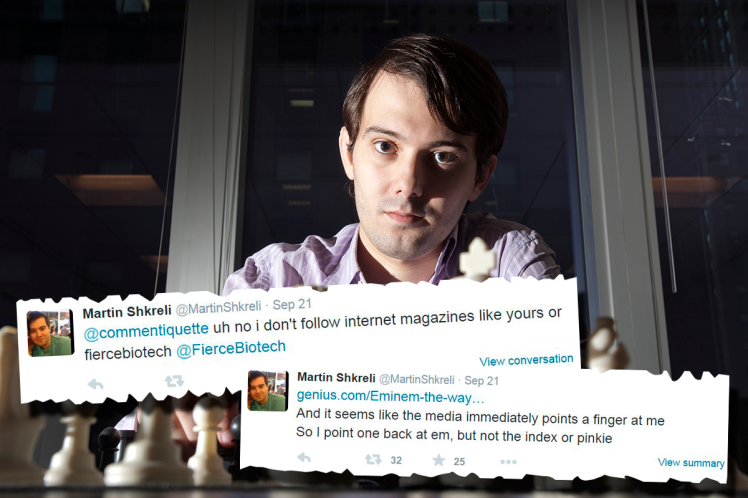 Not content with wreaking havoc amongst the pharmaceutical industry, Shkreli has also graced the world of music with his unfortunate presence. Observing his antics over the last few months is something like watching the rise of a cartoon supervillain. And in a particularly dastardly act, Shkreli was smirkingly revealed to be the mystery “private American collector” who won the recent auction to purchase Wu-Tang Clan’s single copy of Once Upon A Time In Shaolin.

Unsurprisingly, Wu-Tang’s Ghostface Killah wasn’t too pleased about this. Calling Shkreli a “shithead” and engaging in heated exchange of insults via twitter and trash talk videos. Now, Shkreli has comeback with his own recording, sneering at Ghostface from the comfort of what looks like his own bedroom, and backed by three masked goons. Obtained by TMZ, it makes for entertaining and slightly scary watching.

In a tirade that should really land him in the psychiatrist’s office, a pale, suit clad Shkreli throws, what I’m sure he imagines to be, slick and suave insults. Barely making the camera frame, he asserts that “most people don’t try to beef with me.” The federal court case against him, plus the string of complaints and law suits behind that, must have slipped his mind. Though sticking to formalities for once by calling Ghostface by his “government name,” Dennis, Shkreli really lays it on thick.

Cradling a glass of wine in a similar pose to his favourite pseudo-elitist wrestler Damien Sandow, he expresses his pity for Ghostface. Calling him an “old man” who is “trying to reclaim the spotlight from [his] spotlight.” It doesn’t quite explain why Shkreli felt the need to drop $2 million on the much sought after Once Upon A Time In Shaolin, but I’m sure there’s logic to his reasoning.

Adding insult to injury, Shkreli winds up by demanding a written apology from Ghostface; 500 words and no grammatical errors. Oh, and with some genuine contrition please. As if we ain’t had quite enough of Shkreli’s deluded attention seeking, the impression of the school loser having his revenge upon the world from this skinny is so palpable from the League Of Legends player. In a desperate bid to be cool, this final pathetic request just proves that some people really never get over high school.

Watch the video below.