Justin Bieber has seen his fair share of legal controversies in 2015, but it seems that the pop star has will be making one last addition to the list before the year is out along with iconic label Def Jam, after landing themselves in some hot water with the city of San Francisco over the guerrilla marketing for the pop star’s latest album.

The November campaign for fourth album Purpose saw promotional messages spray painted across the sidewalks of major American cities. While using graffiti to market music is nothing new, it seems that the decision to use permanent spray paint as opposed to chalk has angered San Franciscan authorities. 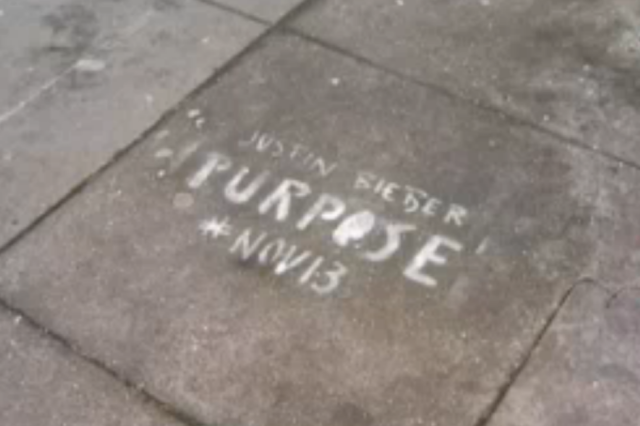 City Attorney Dennis Herrera has penned a fiery public letter (which you can read here) to Def Jam C.E.O. Steve Bartels and Universal Music’s legal counsel Jeffrey Harleston, pointing the finger at Justin Bieber’s label and its parent company. Harleston was not pleased. “I take the illegal graffiti marketed for Mr. Bieber’s album seriously, and I will aggressively pursue all available penalties and costs from those responsible for lawless marketing tactics that intend to financially benefit your respective companies,” Wrote the attorney.

“This prohibited marketing practice illegally exploits our City’s walkable neighborhoods and robust tourism; intentionally creates visual distractions that pose risks to pedestrians on busy rights of way; and irresponsibly tells our youth that likeminded lawlessness and contempt for public property are condoned and encouraged by its beneficiaries,” Rattled Herrera.

According to the document the city can impose fines of up to $2,500 for each instance of graffiti and also claim restitution for the removal of the paint.

There has been no immediate response from Bieber, Def Jam or Universal, but the threat of hefty fines will no doubt have the labels thinking twice when launching future campaigns. We’re now wondering if it’s too late now to say sorry, Biebs?

Read more: Bieber, Drake and Triple J: What Makes Some Pop Music Okay – But Not All?