Howl & Echoes would like to extend a hearty congratulations to prince of pop Justin Bieber. The 21-year-old Canadian pop artist has finally come off probation, following that nasty 2013 vandalism incident, where he egged his neighbour’s house (watch here). At the time, Bieber was slammed with a vandalism charge, which included attending anger management classes, five days of community service and a whopping $80 900 in damages.

Today, a judge has ruled that Bieber is fit to end his two-year probation – TMZ report that his lawyer was glowing with the judge’s positive response.  The company who managed Bieber’s community service were also satisfied with his rehabilitation, as documented in the below letter: 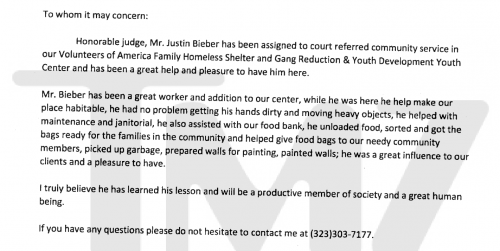 It’s safe to say that Bieber has since grown and matured somewhat – and the world along with him.

Bieber is set to release his extremely highly anticipated new album Purpose, on November 13, 2015. You can find the full tracklisting here, originally announced on social media, via a series of images of graffiti tags from around the world.

Not one to rest when it comes to building hype, in the final countdown toward the album, he’s not only released two new songs in two weeks, as well as his very own cover of Hotline Bling (but is it better than Sufjan‘s cover?) Sorry debuted at number 2, just behind Adele, on the Billboard charts last week.

New track I’ll Show You just came out – and the accompanying video clip features the singer in a varied, scenic series of stunning Icelandic landscapes. Watch it here!