El-P, one half of the dynamic rapping duo that is Run The Jewels, has published the emails which led to the creation of the now iconic logo.

Shared on Instagram, the correspondence between El-P and the artist behind the logo Nick Gazin show El-P demonstrating to Gazin what he’s looking for in the design. The two different gestures, “hand robbing the chain hand” as the above and “hand coming from behind or the side and snatching the chain” beneath demonstrate the design of the logo in its very early, rudimentary stages. Clearly it was the former which won and has now come to be synonymous with Run The Jewels.

“Found this gem today randomly,” wrote El-P on Instagram. “the original email I sent the ever talented @nickgazin explaining the hands before he made them beautiful. 2013.” 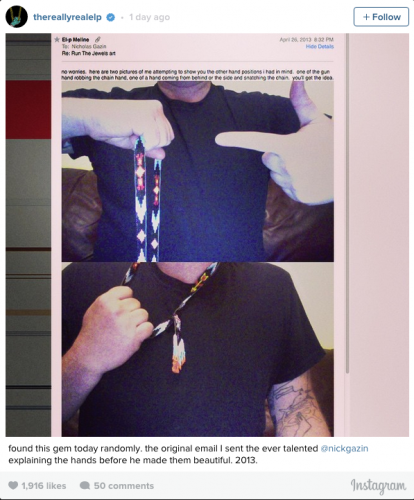 Gazin spoke to Entertainment Weekly last about the creation of the logo in more detail. Apparently it was supposed to be El-P and Killer Mike “together in a fighting stance,” but El-P was not really a fan of it.

Talking about the logo, Gazin said:

“They’re kind of these blue demonic hands and there’s something either frightening or friendly about them,” Gazin told the publication in January. “I see them as being this kind of ‘haunted house’ aesthetic, not necessarily satanic… The blood stains almost imply a horror movie, but I see it as the hands have survived things. I think it makes sense considering the year we’ve had. The whole image is about coming back after having been beaten down.”

The iconography of the logo proved so distinct that fans have repurposed the artwork for the Meow The Jewels project, replacing the bloodied, mummified hands with cat claws and a cat collar. More than that, the pair – and the symbols – have inspired their very own Art The Jewels art tribute show, as well as the brilliant Tag The Jewels graffiti campaign.