Vince Staples was in Louisville, Kentucky this week to perform a show in support of his 2015 album Summertime ’06. A noted fan of fried goods and soft drinks, the young star took some time out of his schedule to visit one lucky chicken shop, Royals Hot Chicken in Louisville. He even went so far as to include a selfie, to verify that it was in fact him behind the glowing report.

Staples was so damn impressed by the food that he went on Yelp and wrote one fine review for the shop, which will no doubt now enjoy a massive influx of hip-hop and fried chicken-loving fans.

Complex reports that the review had been up for a full eight days before people began to notice. Staples had to delete his account soon after, because too many fans were sending him their songs on Soundcloud, which sucks because his account shows that he had written four other reviews, no doubt just as entertaining as this one. Luckily the internet exists, so here’s a screenshot. 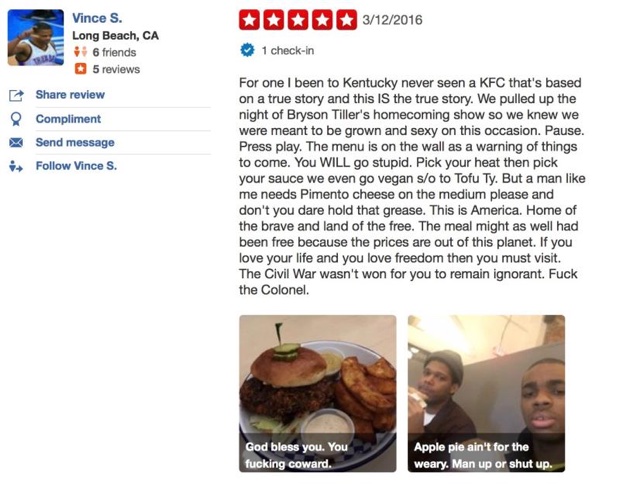 Last week, Staples visited SXSW, where he used his performance at a Spotify showcase to criticise Spotify itself.

Click here to read our interview with Vince Staples