It is being reported that Universal Music Group have placed a ban on their artists releasing music via exclusive streaming. The news comes after Frank Ocean‘s visual album Endless was released via Apple Music last week. Ocean also then released audio album Blonde with similar exclusivity; however, it’s also being reported that this was an independent release, and that Ocean actually left Def Jam/UMG before Blonde, but this is not officially confirmed by any public source. Forbes are reporting that Blonde was released under Boys Don’t Cry, which is not only the name of Ocean’s new zine but his independent label, apparently. It’s unclear whether this happened before or after its release: 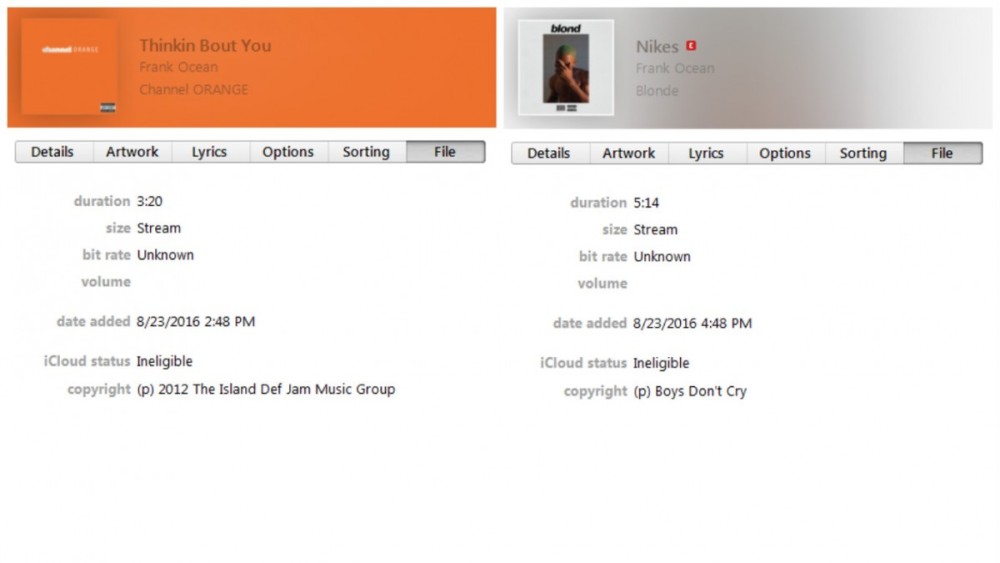 Some reports are saying that Endless “fulfilled” Ocean’s obligations to Def Jam and that he left the label between the two. This decision doesn’t seem to have been premeditated, though. Considering that Universal Music Australia sent out a stream of Blond on August 22, two days after its release, it’s clear that at least in Australia, he was still under Def Jam/Universal at the time. Howl & Echoes has reached out to the label for comment.

It would be pretty confusing and complicated for an artist to release two consecutive releases in three days, having left a major label right in the middle of that. It’s possible that Ocean has left the label, but it’s more likely that this happened after the release, and as a direct result of it. However, this is all speculation. We will report more when we can.

Whether Ocean is part of Def Jam or not, it does appear to be true that Universal have banned exclusive streaming releases across the board.

Music critic Bob Lefsetz has reported that Universal CEO Lucian Grange “sent out an email to Universal executives today ending all future exclusives with Universal artists.” This follows a long critique in his latest Lefsetz Letter mailout, on August 21. “There’s a conspiracy between Apple Music and the industry to change the game,” he said, “to get everybody to pay for a subscription by putting hit content behind a paywall. Apple should be investigated by the government for antitrust.”

“Apple Music is a me-too product that works badly that’s locked behind a paywall and the music industry wants it to be the dominant platform so the fan is squeezed and indie acts are pushed down to the bottom where they belong.

And it’s all happening now.

And Frank Ocean is complicit.

Shame on you Frank, and shame on everybody else who takes money from Apple and screws fans. There’s enough money in music without taking every last buck, and the joke is on you, for thinking so short term, you want your music available to everybody, because in these days of information overload we need nobody, everybody is superfluous, you don’t want to enter the marketplace with one hand tied behind your back.”

This is a massive move, one that could be hugely detrimental for the relationships formed between the label, its artists and streaming services (and one that could also mend relationships with fans). One of the primary pros of Tidal, for example, is its exclusive releases. Artists like Kanye West, Jay Z, Beyonce, Rihanna, Drake, Dr Dre and The Avalanches are all artists under the Universal umbrella (including subsidiaries like Def Jam, Interscope, Republic etc.) who have released music with exclusivity periods for Tidal and Apple in the last 12 months. Considering that many of these artists are not only under Universal, but maintain shares in and partial ownership of Apple and Tidal, the legal and contractual ramifications of this could be huge. Even Chance the Rapper, the most notoriously independent artist in the game, who nevertheless released Coloring Book as a two week Apple exclusive. for two weeks, meaning that fans had to sign up for the service to access it. In April, Kanye West and Tidal were actually sued after The Life Of Pablo, which West had initially promised would only ever stream on Tidal, made its way to Spotify and Apple about two months after it was released. You still can’t get Lemonade on Spotify or Apple Music.

Universal haven’t been making many friends lately; earlier this year they essentially placed a stranglehold on Soundcloud releases too. Unlike the Soundcloud blockage, however, this move sees Universal sharpening its claws against the streaming services, not the listeners for whom this may eventually be beneficial; the average consumer doesn’t want to have to sign up to two or three different streaming services just to access their favourite artists and new releases, and they also don’t want to have to wait two weeks or more to hear a new album just because they haven’t.

It’s no secret that streaming is absolutely the most practical and easily accessible source of music consumption, so the war of releases, exclusivity and label relations is inevitable. But as Lefsetz wrote, every cent is being unnecessarily vacuumed at every point along the way. While exclusivity period might be hard to turn down from a monetary point of view, it can seriously damage theZQ relationship and accessibility of the consumer, who given that this is music and all, really should be among the top priorities in this game. Right?