Now entering its 24th year, Falls Festival is undoubtedly one of the staples of the Australian festival scene. The 2016-2017 edition has made a few changes, having expanded to a fourth location, now including Fremantle, WA as well as Byron Bay in NSW, Lorne in VIC and the family-friendly Marion Bay edition in Tasmania.

Additionally, it has been revealed that the ballot method of acquiring tickets is making way for a more regular purchasing process. General sales will be kicking off at 9am AEST on Tuesday, August 30, with an Optus pre-sale from 9am AEST on Friday August 25 – 26. The general sale will allow you to buy four tickets at a time via Oztix – more details on that can be found here.

The first major headliner to be announced was none other than one of our favourite rappers, Childish Gambino, who will be performing music from his mysterious new release PHAROS. Earlier today it was  also revealed that London Grammar would be returning, having delivered one of the most haunting sets of Falls Festival 2013-2014, just after the release of their debut, and to date, only full-length record, If You Wait. The band told triple j today that they were working on new music (a cross between Pocahontas and Fleetwood Mac, apparently,) so fans can most likely look forward to hearing it played live come New Years. Neither act will be playing sideshows, by the way.

The remainder of the lineup has now been revealed, and it features many of Australia’s most trusted live acts like Violent Soho, Alison Wonderland, Ball Park Music, Tkay Maidza, Client Liaison and DMA’s. Meanwhile, after a one-off at Splendour in the Grass, The Avalanches are set to perform once more, and this time it looks like they’ll be heading out on a headline sideshow tour as well.

International visitors include Parquet Courts, Phantogram (sadly sans Big Boi), Jamie T and Grouplove. On the hip-hop side of things comes Grandmaster Flash, scratch pioneer, the first ever hip-hop artist in the Rock & Roll Hall of Fame, and focus of Baz Luhrmann’s new Netflix series The Get Down. Alongside Flash, rappers Remi and Illy will be representing Australia in the ring.

Head to the official website for tickets and more information, including details on camping, parking and so on. Below, check out the official Falls Spotify playlist: 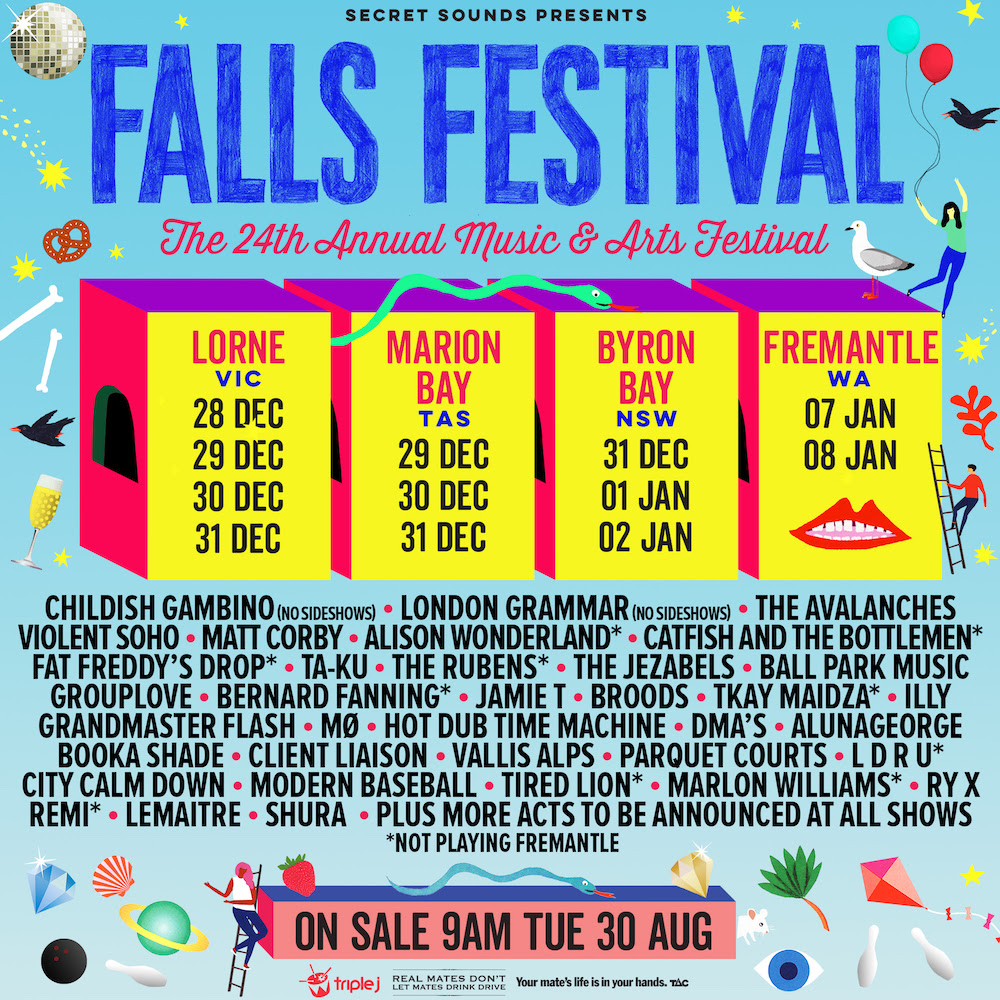