It’s 2003, and the boys and I are playing wannabe gangsters. I remember trying to impress girls by rapping Bone Thugs and Ice Cube. We were shooting hoops and playing basketball video games on the weekend and blaring Ludacris’ Roll Out and Growin’ Pains on repeat – we simply idolised American rap culture.

That was until Obesecity hit our stereos. Obesecity was an album put out by Obese Records back in 2003. Earlier this year, Obese Records shut its doors; it was a sad day and I am still grieving the loss. We are now in a new wave of Australian hip-hop, and I am yet to find where I stand amongst it. So, while I grieve and sort through the new generation’s EPs, I thought it would be a good idea to look back at this culture-defining album and the impact it had on me.

Before this album entered my life, I had no real tie or draw to the music of the city and culture I grew up in and surrounded myself with. It was too easy for me to identify with American culture: I was playing high level basketball (as well as a 15-year-old can) and listened to hip-hop almost exclusively (with a little Dr. Hook and Marvin Gaye and a ton of Mariah Carey thrown in). Basically, I thought I was gangster.

I rocked a 12-inch afro and wore And1 tracksuits; I even thought that if I met Snoop Dogg we would become best mates. Then a mate came around whose older brother, Pegz, ran a little record label/record store down in Prahran called Obese Records. My mate brought over a CD from there called Obesecity, a compilation CD of some of Australia’s greatest MCs of the time.

I hadn’t heard any Aussie hip-hop until this point, and I was immediately drawn to its vibe.

The first track, Now We’re Somewhere by Terra Firma feat. Pegz and Reason, was the reason my mate brought over the CD, as he knew I loved hard-knocking beats and clever dope lyrics and he wanted to show me his brother’s opening line.“Trap your mind in my right,” Pegz rapped over the Simplex beat and I was sold. We finished shooting hoops, stole a couple of dad’s stubbies and sat in my garage smashing the album again and again.

Every track seeped Australian-ness and I started to become proud of where I came from. On track 5, Unsuspected, first of all – those horns! Secondly, Upshot says: “I live for my culture although I feel rejected,” and that’s what I wanted. I wanted to live for the culture, whatever that meant. I was still trying to find myself, and this song started to pave a way for me to join ‘that’ culture.

This was also the first time I heard Hilltop Hoods. Their track Riding Under One Banner summed up the love Australia had for its hip-hop scene. The hook for the song has the boys listing Aussie hip-hop artists and saying that they are “riding under one banner.” Regardless, of what your thoughts are on Hilltop Hoods’ new music, their skills in the early 2000s were undeniable and their impact on the Aussie hip-hop scene is everlasting.

For so long, I’d been listening to American hip-hop and it’s all East vs. West and rappers beefing with each other and bragging about how they are quick to kill each other. Then, suddenly, we have this Obese family all pulling together to make this compilation and “Riding Under One Banner.”

That said, the album does feature one (perhaps Australia’s first and only) gangsta rap tune, featuring none other than the infamous crime legend Chopper Read. He is legitimately a dope rapper, and I’m not just saying that because he rapped, “Don’t care who you know or where you been, it’s not the point/ keep talking shit, I’ll do another 20 in the joint.” But his skills are probably heightened by the fact that I truly believe his lyrics. This track goes harder than most, and is always worth a repeat listen.

I was really drawn to Australian hip-hop, and as I got older I found a greater appreciation for it. I found that Aussies tried a little harder, their beats were impeccable and the lyrics were usually extremely clever and conscious (with the exception of Slop My Knob) and really spoke to my soul. Two tracks on this album especially spoke to me. They were Solomon Klepto’s And I Wish and Ethic’s Anguish. Maybe in the greater scheme of hip-hop I would have found this deeper level either way, but Sol and Ethic really brought it out more so than a lot of other artists at the time. The hook on Anguish spoke to my adolescent questions and feelings I was having about growing up: “have you ever felt this way?/ or am I the only one?”

The reason this album had such a lasting effect on me is due to the doorways it opened for new rap music in my life. I can’t have been the only one either: later on in 2003, even JB Hi-Fi started expanding their hip-hop/ rap section to include an Aussie rack. As the Aussie section expanded further and further over the years, I started buying some of the best Australian hip-hop albums to grace the shelves, and the reason I knew which CDs to buy first was by giving preference to the artists on the Obesecity album.

I don’t think I missed any classics. I got Terra Firma’s Waking The Past, Hilltop’s The Calling, Pegz’s Capricorn Cat, Bias B’s In Bed With Bias, A-Love’s Ace of Hearts, the fucking amazing Brad Strut’s The Authentic LP, and many more.

When I went to the States for basketball years later and was feeling homesick, I would throw on Obesecity and always ended up also throwing on Capricorn Cat and The Authentic LP. Living and playing with American basketball players led to all sorts of debates on the state of hip-hop, but once most of them got past the Aussie accent they were able to love and appreciate Australian hip-hop for the gem that it was.

Australian hip-hop just fucking exploded onto the scene after this album dropped, and it will go down as everlasting and one of the greatest posse albums of all time. I want to thank Obese Records and Obesecity for showing me the way, for making me a proud Australian and ensuring I didn’t lose myself when I moved to America. And I especially want to thank Obesecity for turning us teenage Australian wannabe gangsters into proud and (mostly) functioning members of Australian society. 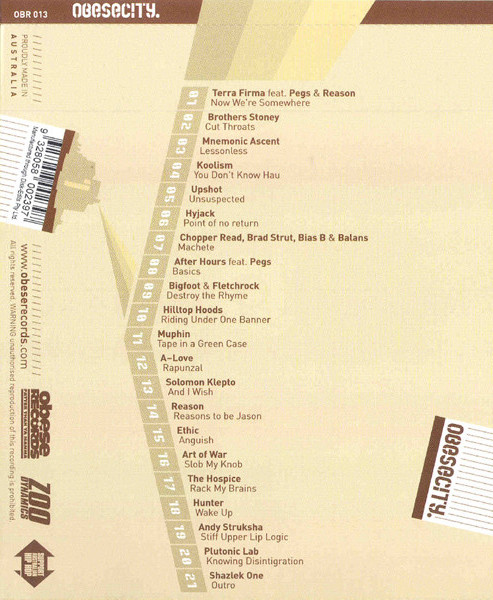