Skepta has added new dates to his Australian tour, after the initial run of shows sold out pretty much immediately. The grime rapper has just released new album Konnichiwa, and last visited Australia at the start of this year to play a handful of New Years festivals. In the wake of his album, the consistently growing international spotlight on grime and of course, a Drake co-sign, it’s pretty damn clear that his fanbase has exploded in that time.

The overwhelming response to demand for tickets means that the artist has now confirmed second shows in Sydney and Perth, as well as a third show in Melbourne. Tickets for shows in Brisbane
Skepta has now announced three additional shows. Although Brisbane sold out too, unfortunately no further dates have been announced. Tickets are still available for all three New Zealand shows, too, although the Auckland venue has been upgraded to accomodate a larger audience.
Check out the new dates below. Tickets for Sydney and Melbourne go on sale at 11am on Monday, and Perth tickets will be available from 9am on Tuesday. 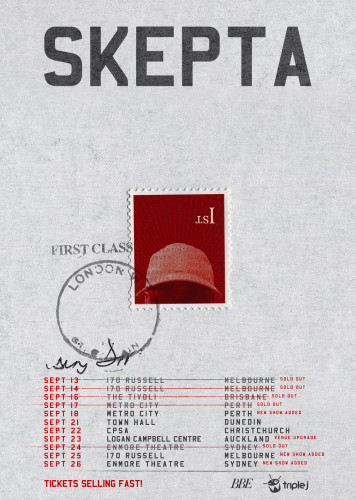 Read our feature – Getting to know grime: The rise of Boy Better Know