YACHT and their sex tape, which they claimed was leaked by nefarious sources yesterday, has been proven to be nothing more than an incredibly misguided attempt to generate sales and in their own words “explore the intersection of privacy, media, and celebrity” – which will undoubtedly earn the band the title of shittiest PR stunt of 2016.

Straight off the bat, I just want to say that my anger and disgust are not because two hipsters from Portland pulled a fast one on me with their stunning criticism of today’s media. I tried to find their “leaked” tape yesterday, since reporting the site that did the actual hosting seemed kind of important and in hindsight, the fact that I couldn’t actually find any evidence of YACHT’s tape being leaked anywhere online, should have probably made me question the legitimacy of the entire story.

One of the first to break the story about what a bunch of bullshit this is was Jezebel. They confirmed that not only does an actual sex tape not exist, but that this entire story was a carefully orchestrated ruse which YACHT had been planning for some time, contacting numerous sites with their elevator pitch for what in their minds must have seemed like the greatest PR stunt in history! Jezebel reports that a colleague of theirs at Gawker Media received this email on April 6.

“For the upcoming music video for our song, “I Wanna Fuck You Til I’m Dead,” we’re faking a sex tape leak.

In the days leading up to the video’s release, we’re going to pretend we were hacked, share and delete confessional social media posts on the subject of our privacy, then try to “get out in front of it” and sell the sex tape, fake a server crash, etc”

It's time to state this.
We are not involved in the Yacht situation in any way the idea was devised and executed 100% without us.

All that YACHT had to do to ensure that their weak-as-fuck joke about them (SPOILERS!) turning into aliens when they fuck landed without making them look like exploitive money hungry pieces of shit, was to just say, “We have a sex tape”, put it online, keep anyone from seeing it for a day through fake server crashes and error messages and then once enough hype had been generated over the course of the day, reveal it to be the arty garbage that it is.

Yes, it’s all on the media and not YACHT’s complete lack of foresight. In their original message to fans in which they announced the tape being leaked, they use a number of absolutely knee slapping sentences which clearly indicate that this is all just a hilarious cultural trope parody!

“…without our previous knowledge nor consent…”

“…humiliating blurring of the public and private…”

“…This is an exploitation…”

By knowingly exploiting the good-will of their fans and the general public, YACHT have managed to showcase their lack of moral fortitude and have inadvertently turned the lens of social commentary on themselves. Essentially they’ve proved that life imitates art, by becoming the morally bankrupt and greedy aliens from Futurama, instead of the cool ones they thought everyone would think they were. 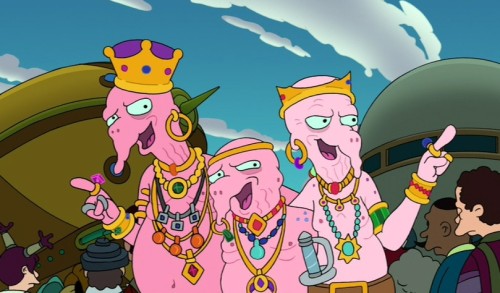