With the confirmation that a Chance The Rapper x Childish Gambino collaborative mixtape/album actually exists coming yesterday via a Reddit AMA, we here at Howl & Echoes have been thinking: what are some of our other dream collaborative mixtapes? I posed the question to some of the team here, and we all mulled it over. Would we go for big name artists, such as Kanye West and Jay-Z as seen on Watch The Throne, or would we prefer smaller named artists who might complement each others’ dynamics?

It’s now a well-worn fact that New York rapper Desiigner sounds like Future. They’re both experts at the Atlanta mumble-rap, where the lyrics dribble out, barely understandable, but somehow still catchy-as-hell. It’s got a really interesting effect on the flow of a track, and a whole album of it would undoubtedly be wonderfully relaxing. Desiigner would likely bring some more energy to the pairing, as Panda manages to marry eccentric backing vocals (BRRRRRRRRRRAH) with subdued mumbling. Also, I’m not going to lie, trying to guess who was rapping at a given time would be a hilarious game to play, and it would really confuse people the lyric-writers over at Genius.

Mixtape title: Two Of Us. 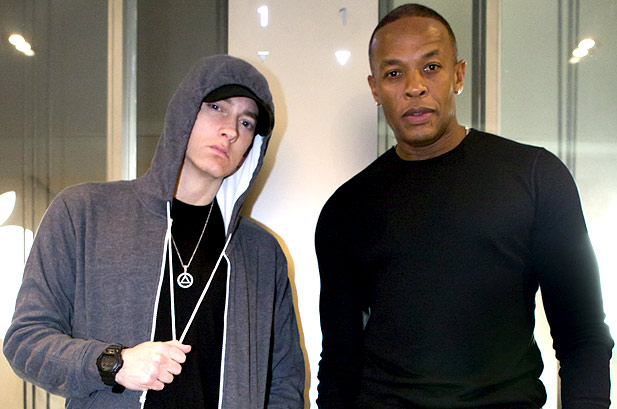 Dr. Dre and Eminem have a long history together, with Eminem being Dre’s most successful prodigy, and one of the greatest rappers of all time. The two already have a pretty expansive catalogue of music recorded together. Like, seriously, it’s a lot. But one thing they haven’t done is release an album together. Sure, there have been features, but they aren’t really the same as a full on collab album. It’s unlikely that we’ll see anything like this, sadly, with Eminem having faded somewhat from mainstream rap focus, and Dre releasing his grand finale mid last year. But hey, we can hope can’t we?

Okay so this fantasy is a little different, in that it’s already happening – or is it? Doomstarks is a long, long rumoured full collaborative project between MF Doom and Ghostface Killah, and it’s already evolved past being a dream. The latest rumours came last December, when they hinted at a February release. Sadly, that clearly didn’t happen, although we have been mercilessly teased with the odd single, namely Victory Lap and Lively Hood. Of course, that makes it extra annoying that we still don’t have a Doomstarks album, but we’ll keep the dream alive forever.

A Meek Mill and Drake album would be amazing – what a way to either set their differences aside, or just go at each other in one joint record? Best of both worlds, right? As much as it would likely just be a collection of their diss tracks toward each other, new material would be much better. Even better would be if all the tracks were diss tracks in their own right, but all the disses were veiled, transforming a joke album into an exercise in passive-aggressiveness.

Finally, this is my number one dream collaboration. Since Pope Francis released a prog-rock album last year, my prayers have been focussed on a Yeezy x Pope album. Not just because a main theme in a significant amount of Kanye’s music is his faith, but also because Yeezy rapping over a prog-rock track would be exactly the kind of thing that he would do. My only concern would be that Kanye would feel the Pope beneath him; after all, he has worked with God. But West’s last two albums have had a strong art feel to them (Yeezus more-so), and with TLOP‘s strong gospel ties, this seems like a logical progression to take.

Alternatively, a Nicki Minaj x Kanye West album would be phenomenal, not just because it would bring together two of the largest and arguably best names in rap in the last few years, but Monster. Imagine a ten-track album of tracks at the same level of Monster. The world would explode. It wouldn’t even need a title, just put their names on it and watch the money flow.