Sydney’s Secret Garden Festival has been running for eight years now, but this was my maiden visit to the event, situated around an hour’s drive from Sydney’s centre. For the first time this year, the festival expanded to a two day event, and I certainly hope they keep it that way. It was a weird, wacky and wonderful weekend, unlike any other festival experience in the country. Here’s some of our favourite parts of the weekend.

Secret Garden’s penchant for taking dress up seriously has long been reputed, and seeing it in the flesh was incredible. Everyone, and I mean everyone, put effort into dressing up, and some of the outfits, especially those that were homemade, were among the most creative I’ve ever seen.

The first night featured a “Space Cowboys” theme, and the crowd well and truly delivered. From tinfoil to glow sticks, from sheriffs hats to chaps  – yes, assless – and enough glitter to decorate the entire Mardi Gras parade. The second day, and night, featured a wider variety of outfits, equally as creative, amazing and absolutely hilarious. Even if you don’t consider any other aspect of the weekend, seeing thousands of people dressed in ridiculous, amazing costumes singlehandedly made this festival  an incredible experience. With the exception of those two idiots who showed up in blackface, and the numerous Indian headdresses, the outfit efforts at Secret Garden are unparalleled. Well done, team. 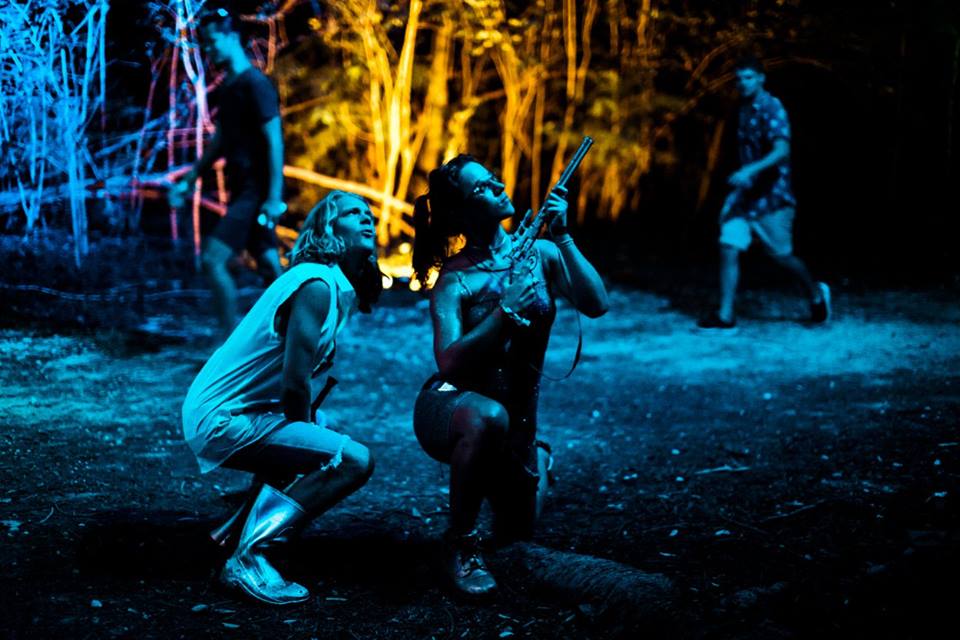 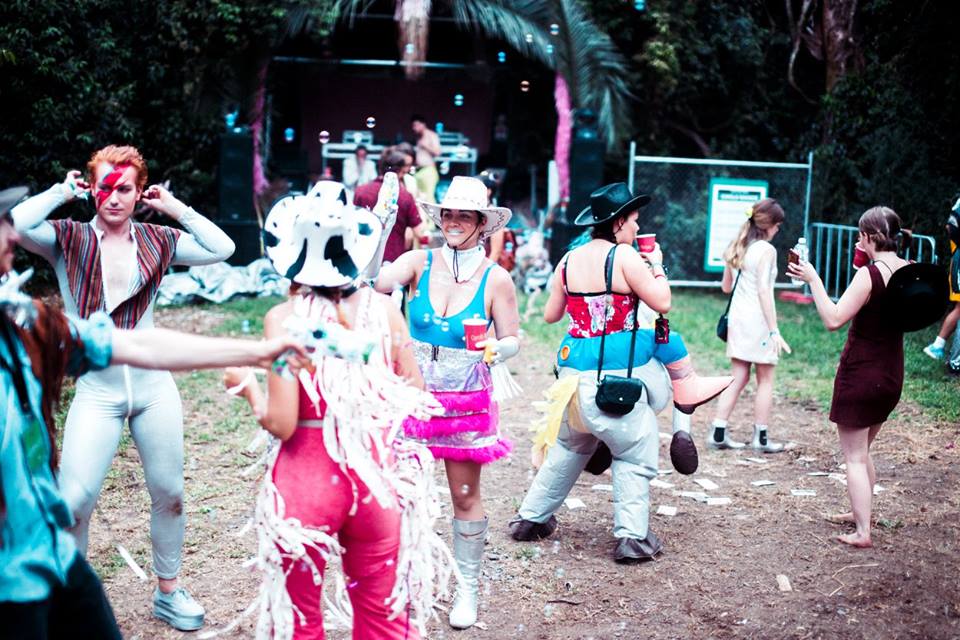 It’s cliché, sure, but the atmosphere at Secret Garden is like nothing else. In spite of the overbearingly intense police presence (see below for more), everyone was in good spirits, and there was a freeing, friendly, tension-free feel throughout the campsite and main areas. Although the forecast had predicted rain and thunderstorms the entire weekend, the sun was out all day, dropping to a really reasonable temperature at night, making it even  more enjoyable.

Everything was in glorious technicolour, creating a really captivating environment, evoking childlike excitement, never knowing what might be around the next corner or behind the next tree. From the decorations and lights adding a festive cheer to the surrounding greenery, to the stalls and beautiful art installations throughout, and of course, the aforementioned costumes, it was really enchanting – particularly because there were so many hidden nooks and crannies, tiny stages and secret spaces in the woods.

I saw no fights, nobody out to cause trouble, no dickheads, just people having fun, dancing and enjoying the event. It would’ve been a challenge to not enjoy oneself.  It felt like everyone was collectively having a really great time  – and that’s because they were.

Another great advantage of this festival was that it’s “cashless,” meaning you put money onto your wristband and tap it like you would a card. This meant that you could just put your wallet and any other valuables in the car, safe from paranoia, theft or loss. This too increased the good-vibes atmosphere, as nobody was really worried about anything going missing throughout the weekend. Plus, you got refunds if you didn’t spend all your dosh, which doesn’t happen at festivals that use pre-purchased tokens. 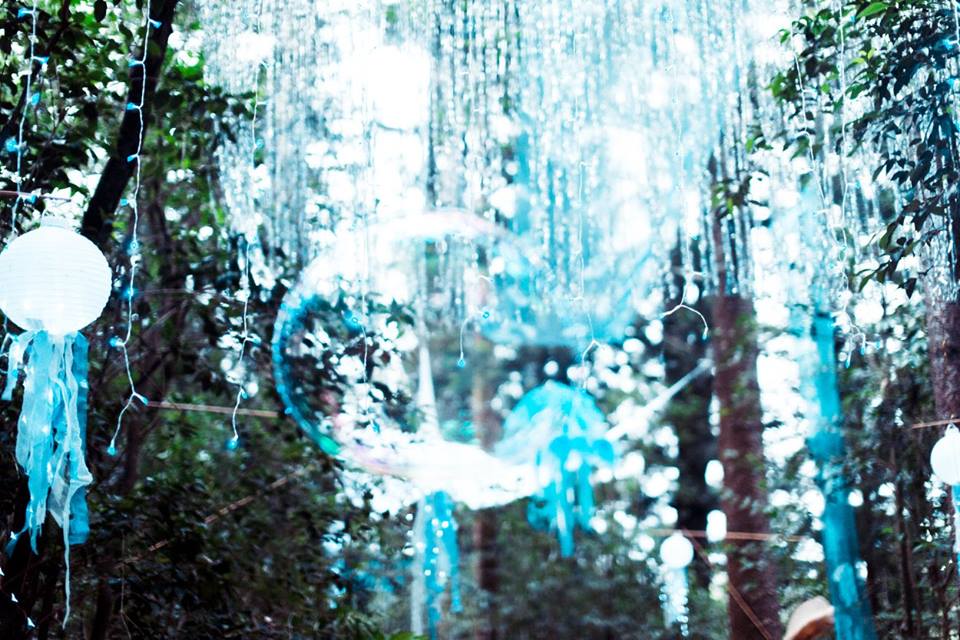 Secret Garden boasted an incredible lineup, featuring the absolute best in Australian music of all genres, from electronic to rock, from lo-fo indie, to hip-hop and beyond. With the exception of Atlanta’s own Raury, the strictly Aussie line-up kept punters moving and shaking the entire time. My personal favourite set came from the always-incredible Sampa The Great, who I’ve seen a number of times, and never, ever fails to leave me absolutely astounded by her energy and talent. Backed by a DJ – her producer, Goridguez – (the last time I saw her she was supported by a full backing band), she was free to roam the stage, hyping up the crowd with a performance and attitude about one hundred time her size. I’ve said it before and I’ll say it again, she is my favourite Aus hip-hop artist around right now, and every time I see her live cements that.

Raury, too, delivered an incredibly energetic set, running around and flailing about on stage, backed by a full live band. I wasn’t sure what to expect, as I had caught him in Sydney the week prior, and was really underwhelmed by the predominantly low key, folk-y set, but this weekend he went above and beyond, well and truly making up for it.

While I didn’t catch too many DJ sets, I think my favourite musical hour of the whole weekend came from Shantan Wantan Ichiban, who spun a ridiculously on-point blend of hip-hop, R&B, grime, trap and more. Armed by backup dancers and smoke machines, the entire crowd was heaving like nothing else. One of my favourite live and radio DJs around, it was just brilliant. I wish it had gone on all night! 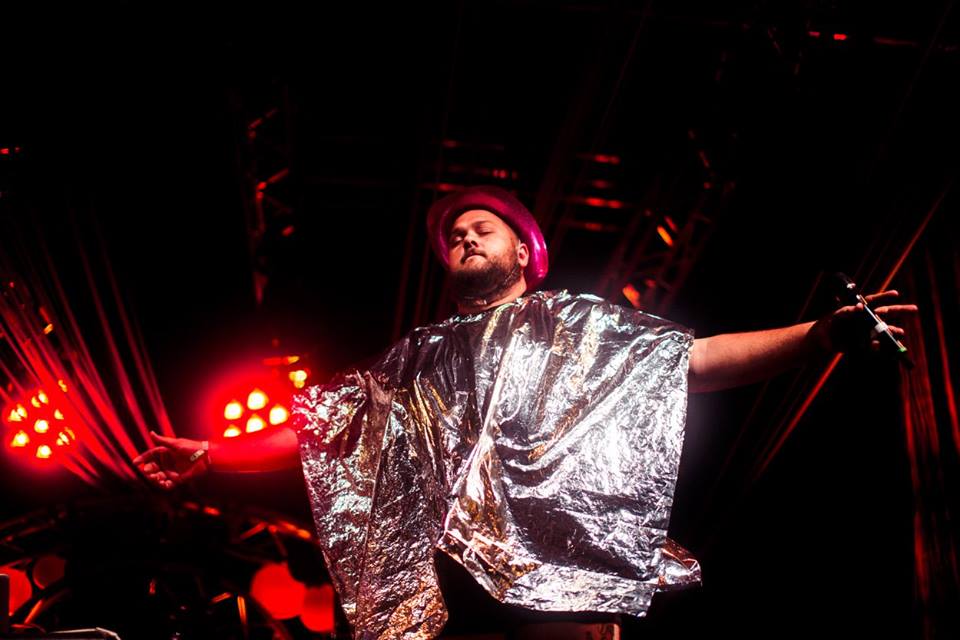 Entering Secret Garden was by far the worst moment of Secret Garden (which was okay, really – it could only go up from there!) Every single car was stopped and searched, inside and out, by security guards, an army of police, and their loyal, if completely pointless, canine companions.  I felt really, really uncomfortable having five grown men going through literally every crevasse of my car and luggage. I obviously understand the need to ensure the safety and security of attendees, but this felt like more of an attempt at scaremongering than anything else. Of course I understand the need to search for drugs and alcohol, but there’s a right way to do it and a wrong way to do it. For instance: one man picked up the water bottle I had next to my driver’s seat, opened it, gave it a sniff and a shake, and literally threw it back into the car, open, spilling out onto the seat. Come on guys. I know there’s been a lot of issues with drug-related harm at events, but quite frankly this was ridiculous, aggressive and counter-productive.

Sure, too much security is better than none at all, but it doesn’t need to be handled in the way it was. We felt under threat, as opposed to feeling like the police were just doing their jobs, keeping us safe from harm. It’s not that I’m saying, “damn, I just wanted to bring in mountains of booze and drugs and spend the whole weekend getting really fucked up.” It’s more that it just felt incredibly arbitrary and unnecessarily, intentionally aggressive – a show of power more than anything else.

The saving grace of this event were these two middle-aged police who approached us at one point during the festival. They were completely different – they were friendly, they were conversational, they were making sure we were having a good, safe time. It’s men like those two who re-instilled a sense of hope, respect and safety in our law enforcement. After joking about my spray-painted silver sheriff’s hat, we had a really great chat about the atmosphere, the role of police at these events, how it’s their job to keep us safe whilst having fun, and most interestingly, how they disagreed with the stance adopted by the majority of police patrolling the event – a stance that genuinely felt to be “guilty until proven innocent.” They were joking around and having a great time. It was refreshing and truly heartwarming to experience – if all police were like those two, Australia would be a much better place.

Look, let’s be honest – regardless of what the insane police presence might indicate, Secret Garden is a party festival. The trick is to keep punters safe while doing so (as opposed to trying to scare them out of it, which can and has led to far worse consequences). The festival set up drug and alcohol testing at the end of the weekend – breath tests for free, and $20 for drug tests. The volunteers at the drug test stations were friendly and really helpful; if someone had had a little too much and were unfit to drive, they didn’t berate them or criticise them, they simply provided the information they needed – how many hours until they’d be fine to drive, whether they needed to eat something, drink water, get some sleep and so on. I think this is a really incredible initiative, one that no doubt saved a few lives that day. I was honestly surprised that it was set up so well – considering that the primary roadblock prohibiting pill testing at events is that the presence of a pill test is, in the eye of the law, effectively an admission of drug use, I was really impressed and happy to see that they had permitted the testing – not to mention the long lines of people queuing up to check they were okay.

Secret Garden was a wonderful weekend festival, one I would happily return to time and time again. Well organised, easy to navigate, with plenty of space in the camping grounds and throughout the festival. Plenty of food and drink options, plenty of entertainment choices, friendly staff, a brilliant crowd and beyond. Bring on 2017! 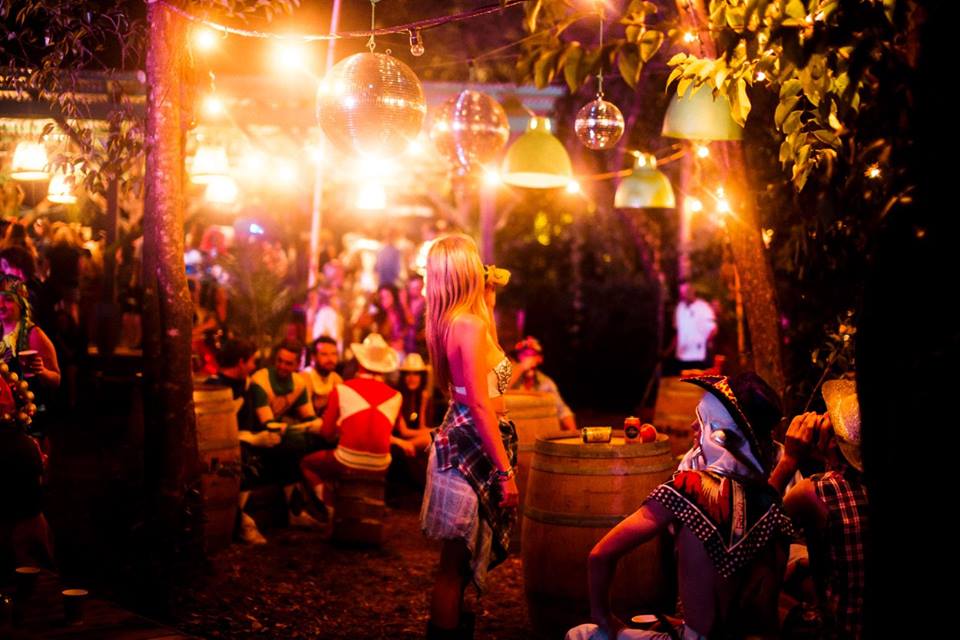