America’s First Lady, Michelle Obama, appeared at Austin’s SXSW with her Let Girls Learn initiative. Joined for the panel discussion by Missy Elliott, songwriter Diane Warren and actor/activist Sophia Bush, Queen Latifah also made an appearance as moderator. The initiative was launched by Obama last September, and “aims to break barriers for the 62 million girls around the world who are not in school today, more than half of whom are adolescent.”

Grounded in the idea that girls need their own language to address the inequality of gender, Let Girls Learn ties strongly to the women present at the discussion. These three were there representing the strength and success that women can achieve, and particularly those women who hold a real place in America’s culture as hip-hop artists, and as such, as a real part of American culture.

The discussion centred around each lady discussing what was a pivotal moment in her career or lifetime. Something that changed their way of thinking and their view of the world. Missy Elliott shared the story of her mother and her survival of domestic violence, Queen Latifah spoke about the effect the rise of AIDs had on her in the 80’s. She remembered how she was drawn into activism through this, and also seeing friends fall into the use of crack cocaine at the same time. 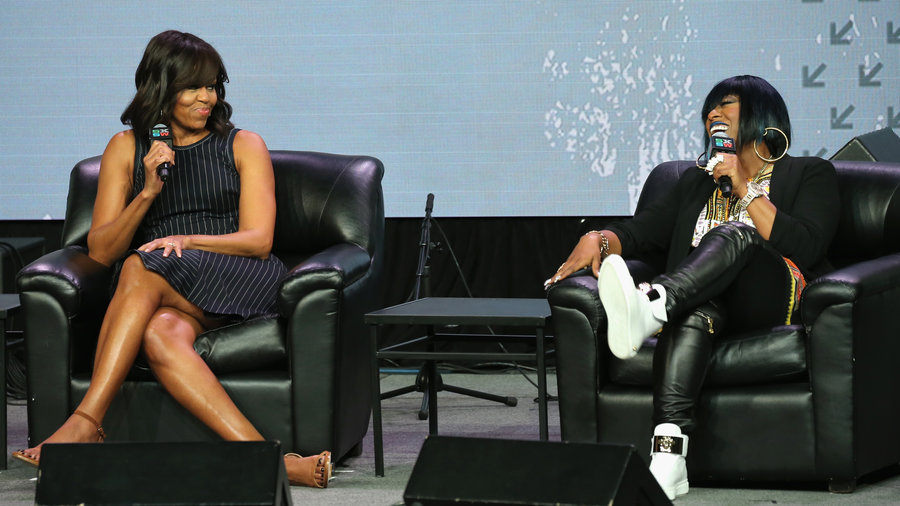 Obama, or #FLOTUS, chose her childhood in Chicago and a determination to overcome the doubt that was so inherent at the time;

“I was trying to make my way and do good in school and apply to good colleges, there were always people around telling me what I couldn’t do… My reaction to that at the time was to prove the doubters wrong. But not every young person reacts to it that way and there are many people whose dreams get snuffed out.”

The conversation also covered the very real difficulties and dangers that girls face all over the world in their determination to receive and education. The panel touched on the story of Malala Yousafzai, the Pakistani activist who was shot by the Tailban, aged just fifteen, for promoting girls’ need for education. Also the abduction of the Chibok schoolgirls in northern Nigeria – both are extreme instances but very real indicators of a global problem.

The serious topics of the discussion seem to have been tempered by plenty of lighter moments, fostered by Obama, such as calling for men to “get it together” whilst the ladies were throwing out love for “the good guys”, all alongside her insistence that women find places within every circle of power. She also revealed that Stevie Wonder’s Talking Book, gifted to her by her grandfather, is her favourite album of all time. One of the most memorable moments came as the First Lady responded to a question about whether she would be sad to leave the White House. In reply the FLOTUS sung the titular refrain from Boyz II Men’s It’s So Hard to Say Goodbye to Yesterday.

The event itself was soundtracked by a song spearheaded by the First Lady. the track This is For My Girls was released yesterday and all proceeds will benefit the Let Girls Learn Initiative. The song was written by Diane Warren, and features Elliott, Janelle Monaé, Kelly Rowland, Kelly Clarkson, Zendaya, Lea Michele, Jadagrace, and Chloe & Halle. Chloe & Halle also performed before the event.

Perhaps the most pertinent question to Obama herself was whether she would ever run for president, like Hilary Clinton following Bill. The First Lady made it clear that she would not consider a presidential run, but would rather keep on working with young people all over the world. Citing her children as her main reason, the FLOTUS responded;

“No, no not going to do it. One of the reasons why is that I’ve got these two young people at home. Being the kids, the daughters of a president, just think about it. Come on young people, not so easy. They’ve handled it with grace and with poise, but there are so many ways to impact the world and you don’t have to be president of the United States to do them.”

With the intent of continuing the work she has begun with Let Girls Learn, Obama said that she plans to continue her advocacy work even after her family’s departure from the White House. She is looking to engage a new generation in politics and keep pushing for a better chance for young people, and rallied the world with her statement, “I just know that if I can do this and be here and have gone to great colleges and have all these wonderful experiences, you can do it too”.

Image via The Verge.