To celebrate International Women’s Day, an event which unfortunately only happens once a year, Triple J announced that they would be marking the day with “Girls To The Front”. As suggested by the name, it’s essentially a day on which women take over the station, hosting the shows, playing jams by female artists, and just generally celebrating women.

In a turn of events that should be surprising but sadly aren’t at all, some men have taken to Triple J’s Facebook page to express their disdain for having to listen to *gasp* female hosts and women using instruments to make music. At this stage it’s fairly hard to pinpoint the exact reason for the outrage – apart from rampant misogyny. They have succeed in highlighting that as soon as anything even barely puts “Girls To The Front,” there will be a large number of men there to point out how sexist it is, while simultaneously saying “something something feminism.” 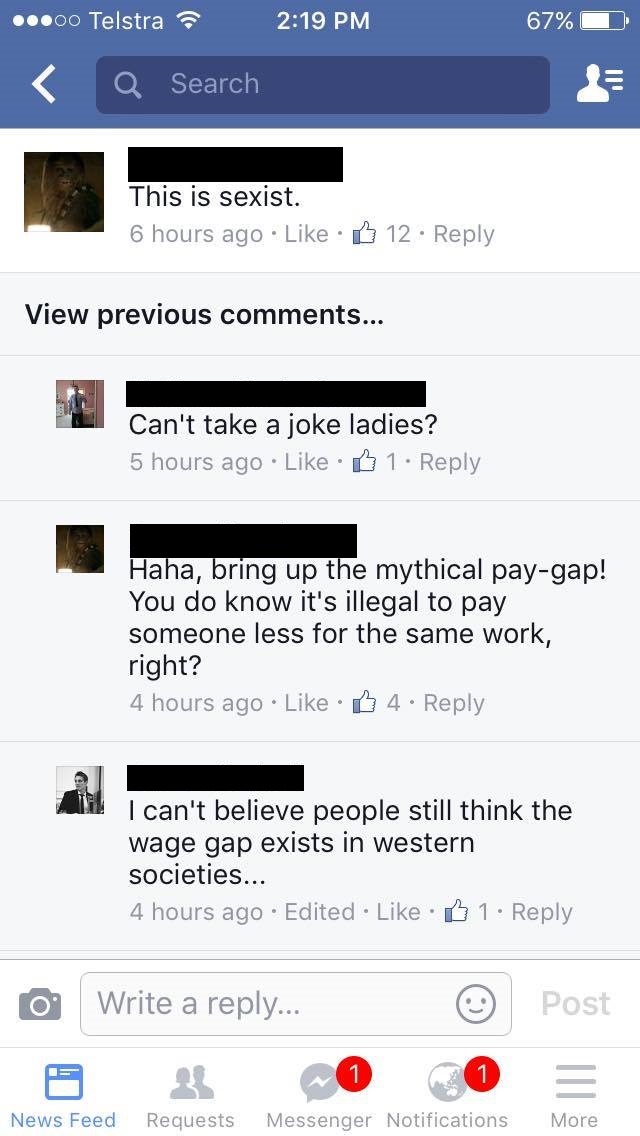 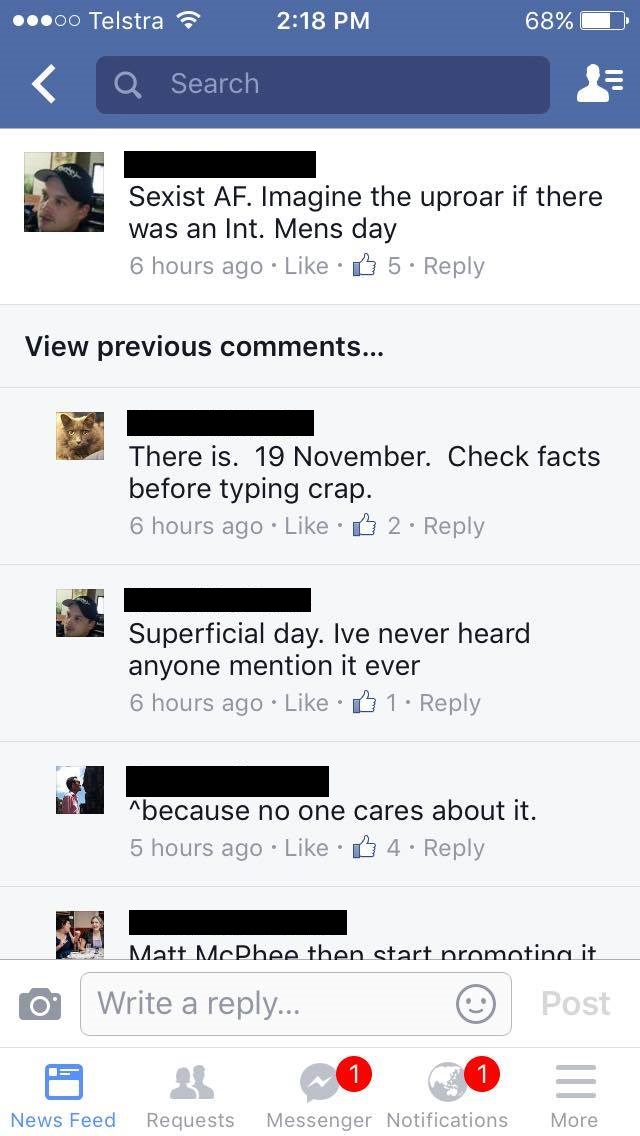 I understand that for some men it might be difficult to come to the realisation that regardless of how disgustingly creative you can be while expressing your dislike for women in a Facebook comment, the tide is shifting, and you will have to share your “kingdom” equally with someone who doesn’t have a penis.

As a penis holder myself, it is utterly embarrassing to watch someone kick and scream against inevitability, similar to the way a toddler puts up a fight before bedtime. You can’t stay up all night little Jimmy, sooner or later women will be full-fledged equals and, shockingly, might even host Triple J!

The really depressing fact is that a number of individuals find it absolutely unacceptable, that for one single fucking day, a radio station that, judging by the uproar, they listen to on the daily, is privileging a group of human beings who are celebrating the strides they have made in a historically male-dominated society. 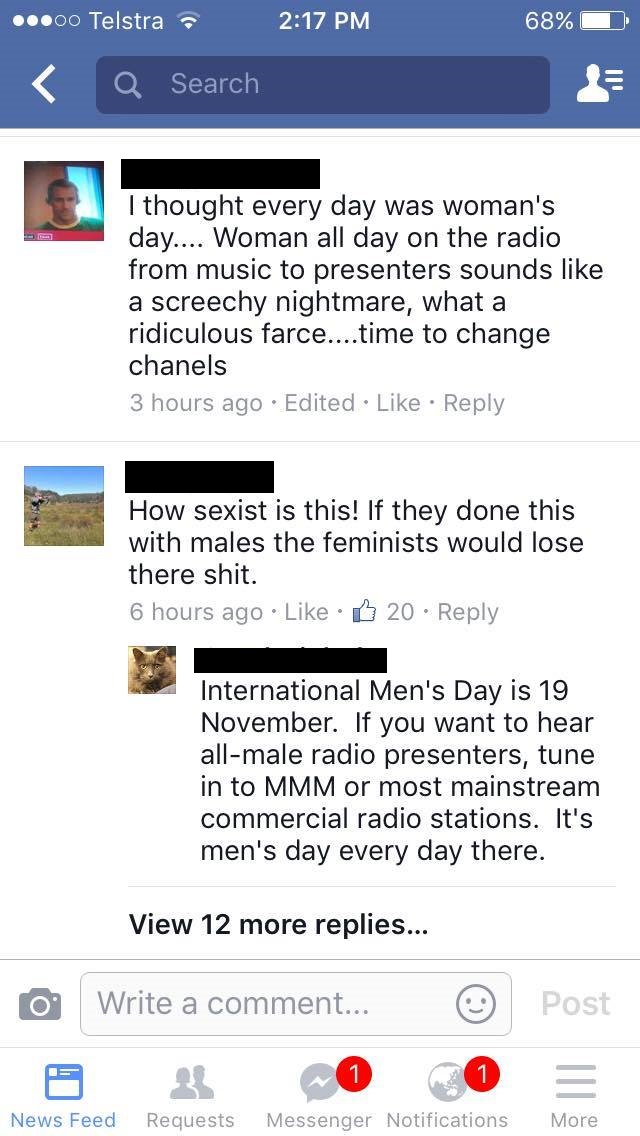 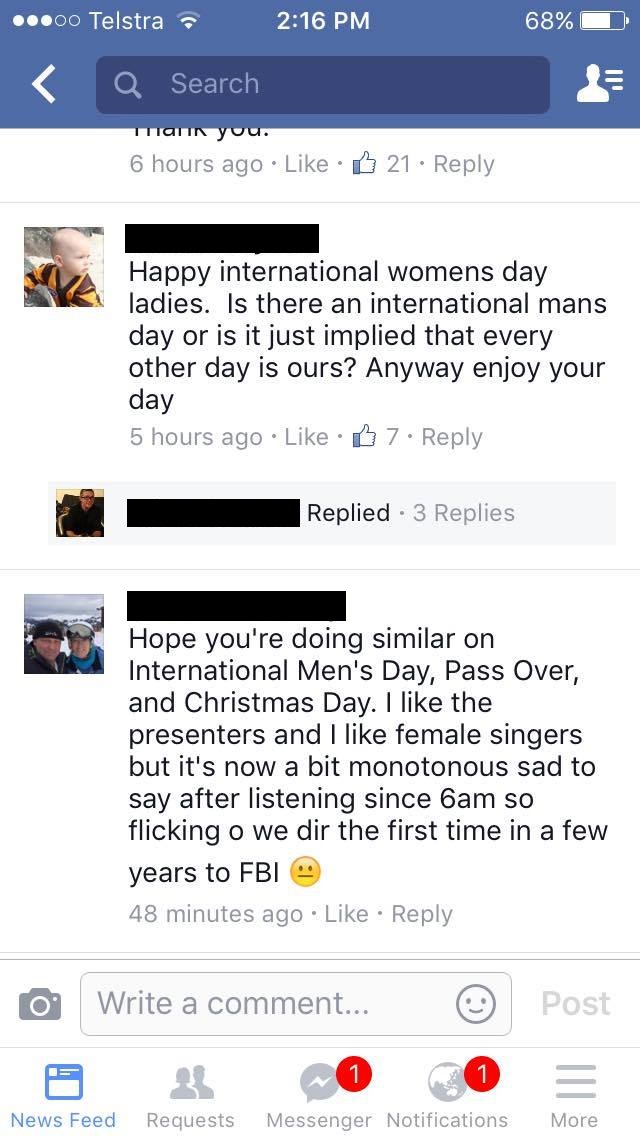 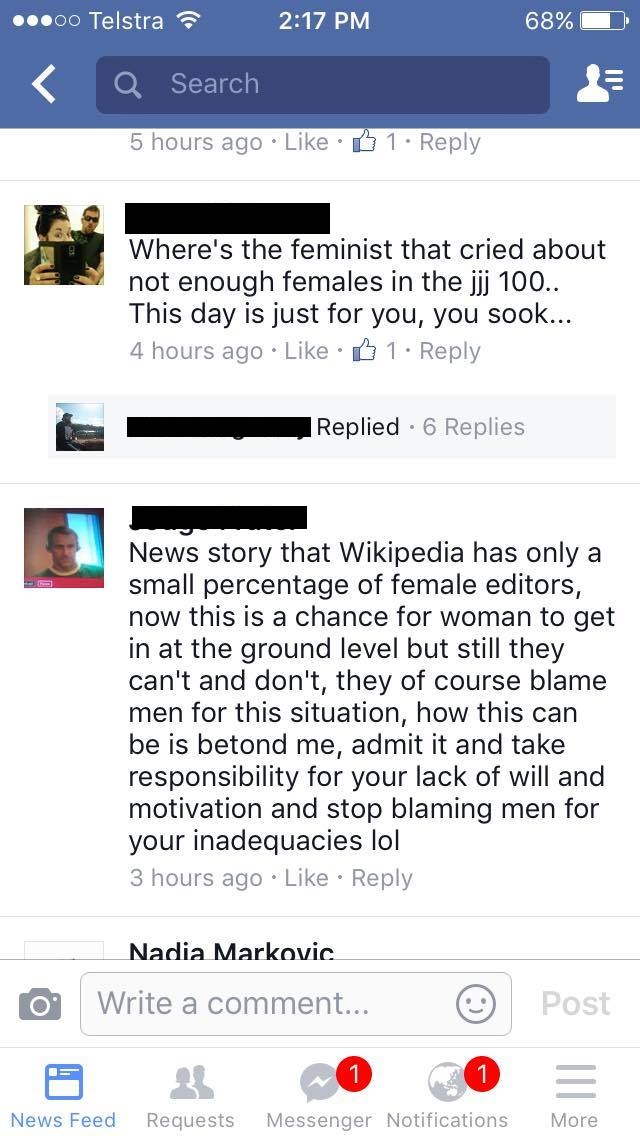 These people can’t take one day to put aside their alarmingly negative feelings and simply allow a (I can’t stress this enough) historically oppressed group to do their own thing. Opposing sides in world wars have been shown to have more respect for enemy combatants than certain men have had for women in general. These aren’t even women who have any direct impact on their lives – just women being happy on a globally recognised day. This is why we need feminism.

Instead of wasting space in this article to pull apart and analyse these comments more, I would prefer to simply suggest things to do on this day. Use it to celebrate. Use it to remember all of the hurdles someone you love has had to overcome. Use it to thank them for not giving up. If you’re a woman, celebrate yourself and reflect on all the achievements you’ve made thus far and focus on the ones you’re still aiming to make, or just do whatever, you don’t owe the world shit. Ow, and have a boogie to our IWD girl power playlist!

If you’re a man, open up your mind and try to see the hardships that not only the women in your lives have had to face and deal with, but women in general, and try not to be a misogynistic piece of shit. Be an ally instead.

It will be interesting to see if Triple J will address the negativity surrounding their “Girl To The Front” event. The sad reality of these sorts of issues is that they are usually ignored and taken as something that was always bound to happen. Hopefully over the course of the next few years, we will all be genuinely surprised by something like this, instead of just accepting it as a standard response to the celebration of women.