Politics and culture have always been the cornerstone of Sri Lankan born singer M.I.A’s music. Turning a deaf ear to criticisms of appropriation and incitation (like in her album, Kala), she is unrelenting in her exploration and in her ability to call time on those things that others might shy away from talking about.

Last year’s release of a self-directed video clip for her song Borders ushered in her voice to one of the most pertinent political conversations of recent years. The refugee crisis, and surge of migrants into the West, has caused huge division between political parties and civilians alike. Though we’ve seen exceptional moments of compassion, in the worst cases, it has also given rise to examples of some of the more despicable forms of prejudice.

M.I.A recently appeared live on Al Jazeera to discuss the clip and her views on the continuing refugee crisis. Asked about the reception of the video, she commented that “”It has weeded out a lot of hate from neo-Nazi groups, and people thinking that it’s going to cause white genocide, and that’s what I’m promoting.” She makes the point that this issue is one that she has consistently addressed throughout her career, and sadly this misunderstanding and repurposing of her work is something that she has had to contend with for a long time as well.

As divisive as the problems she talks about, any artist who tackles political issues will always face this kind of criticism and extreme interpretation. But on the flip side, she also says that, unsurprisingly, she has “had a tremendous amount of support from my fans and other people who feel that it’s important for artists and musicians to speak about current affairs, and things that actually affect our society.” 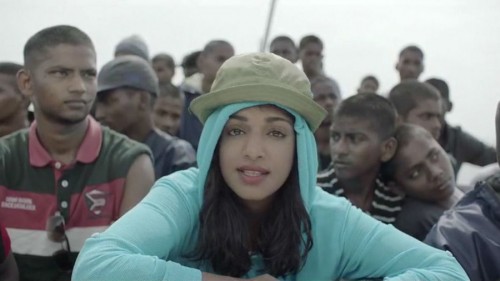 As a refugee herself, M.I.A holds the topic close to her heart. Having left war torn Sri Lanka to come to England at the age of nine, few understand the problems of cultural integration as well – and are in such a position to speak out about these issues. By her own admission, she accepts her role as a kind of “poster child”. Talking about her views on multiculturalism and integration, M.I.A comes into her own as a positive influence;

“I think integration is a positive thing. Assimilation is separate, and I think integration can be a positive thing, and I’m a product of that. It has valuable contribution to culture. Creativity especially has thrived out of something like that. When I first came out as a musician, I always championed the concept of multiculturalism, and how coming from England actually helped facilitate something like that, and facilitate someone like me being able to come out and make music and be part of the music industry in the West. I think that’s only positive. I can’t find anything negative about multiculturalism.”

Many have criticised M.I.A in the past for her political ideology, or questioned how deep her concern really runs beyond the aesthetics. But no one can question that she speaks from experience, and from a point of empathy with victims of these crises and those starting again in new countries and cultures, that few of us have the privilege of really understanding. In an age of political correctness, prejudice is more dangerous than ever in it’s refusal to keep quiet. So we can only hope that global artists like M.I.A continue to make their noise as well – and keep the volume well up.