The pervasive influence of music in the app-world continued today as Noah Brunell launched his music dating app Mix’d. The app aims to bring folks together by pairing people up based on their music interests. Using a similar swipe right/left interface to Tinder, Mix’d, instead of showing a summary of a person’s entire personality in a few brief sentences, instead figures that music taste is enough to bring people together. 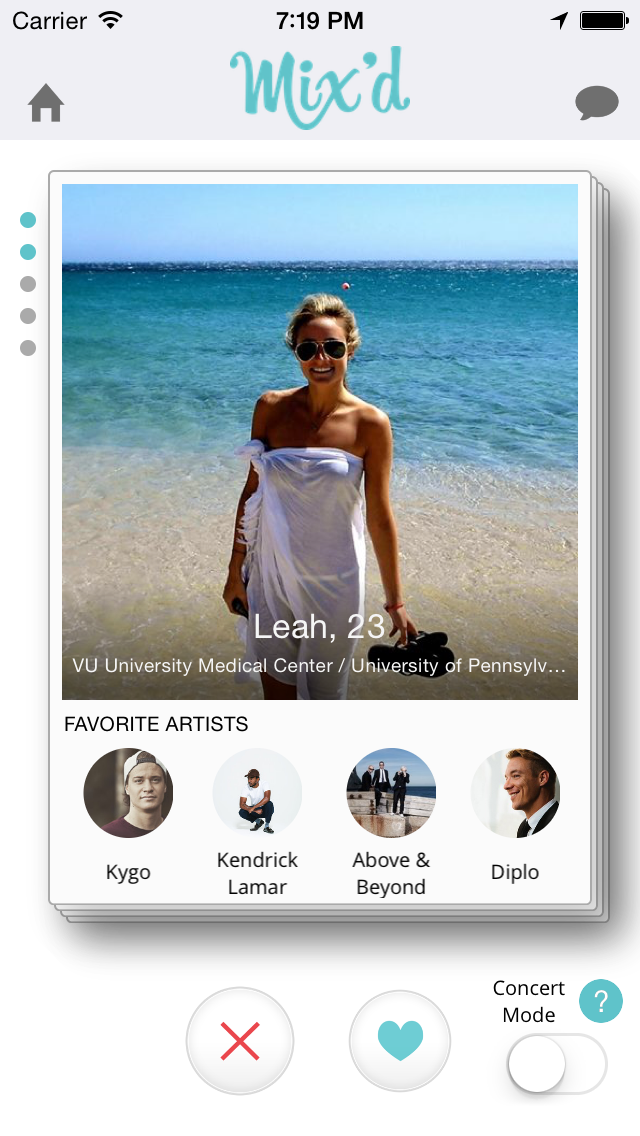 Mix’d uses the Echo Nest API (now owned by Spotify), and has access to thousands of artists with which it can intelligently pair to other user’s musical interests. So unlike Tinder, you know when you meet up with that hottie you swiped right for, they will at least like the same music as you. So basically, it’s Tinder with an ice-breaker. Instead of bumbling through an awkward date talking about albatrosses, now you can kill five minutes talking about DJ’s and bands that you both like before bumbling through an awkward date talking about albatrosses.

Brunell though, has high hopes for the product, planning to secure more users by introducing the app to dance music fans at upcoming festivals Tomorrowland and Electric Zoo. When speaking on the product with Thump he noted that “I go to a lot of shows. It’s a huge part of my life, and all my friends date girls or guys that are into the same scene.” People with similar interests meeting each other and dating hardly seems like novel concept. So it begs the question, if people are into the same things, and going to the same events, then why do they need the app to tell them that the people they are looking for will be at the same event? Much like the recently launched app MSTY, I wonder if there is really a market for another app that is essentially a knock off of a bigger app but designed for a niche market.

I guess Mix’d is more of a time management tool, meaning all those seeking groovy, EDM infused love will no longer waste their time on people at festivals and concerts that are spoken for. Which, I guess, is something. Oh, and since it syncs with facebook events, it’s a pretty shrewd way to figure out which babin’ strangers are going to be tearing up the dance floor at your next show. I really wish though, that they’d simplified their app description. I mean why waste time with “Finally a dating app for music lovers! Mix’d matches you with people in your area who share the same taste in music and are going to similar events” when you could say everything you need with “Swipe, Dance, Fuck, Repeat.”