Dark Mofo has officially kicked off in all its gothic glory, and what a time it’s already been for Australia’s most unique festival. Beginning in Hobart on June 8, the festival has spearheaded a massive flurry of cultural and creative activity throughout the city, from international musical acts to local students delivering performance art, and many locals quite literally ‘painting the town red’, adorning shopfronts, hotels, and residential homes in Dark Mofo’s signature blood red imagery. Here’s the best of what we’ve seen so far. 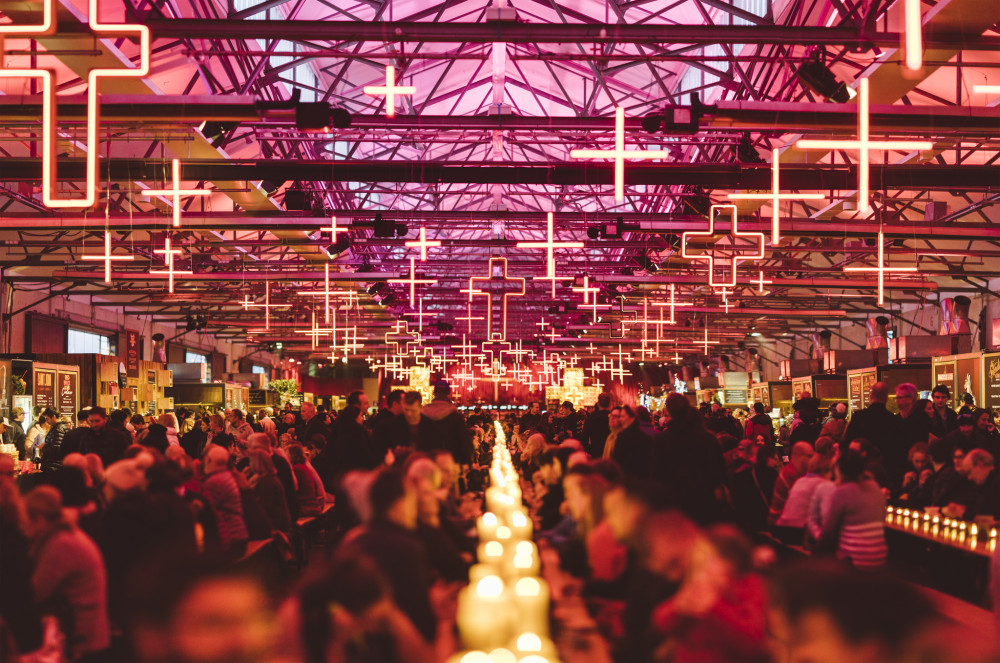 Held across both Dark Mofo weekends, the epic Winter Feast is a core pillar of the festival, in terms of how it all began. Taking place in and around a massive warehouse on Hobart’s waterfront, the Winter Feast is the dinner to end all dinners. From the moment you walk in, you know it’s going to be something special. Long tables and benches, adorned with large candles, stretch out across the room, bordered by dozens of stalls offering the best in Tasmanian food and alcohol. Hanging from the ceiling are fluorescent red crosses, and you’ll often find live music providing the harp and violin-laden soundtrack.

The sight is nothing short of a spectacle. 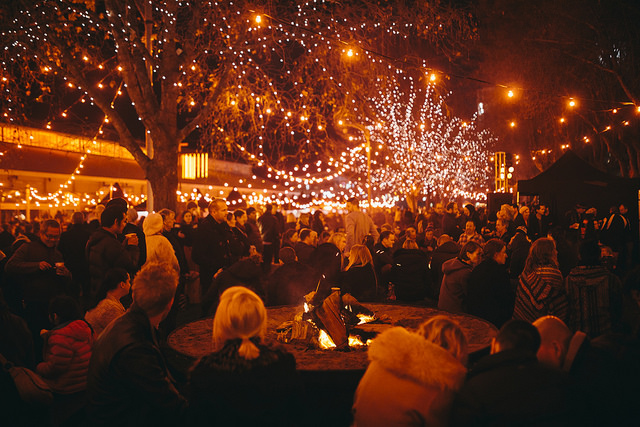 The food itself is remarkable, with relatively fast-moving lines and unbelievably well-priced offerings. While there is a $10 entry fee (granted, this can’t be cheap to coordinate), the season pass is great value for money if you plan on going more than once – and trust me, you will want to go as often as you can, if for no other reason than to try all those wonderful sounding dishes that caught your eye the first time. 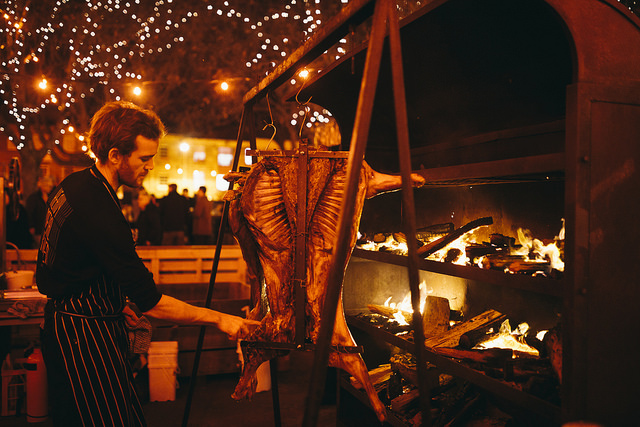 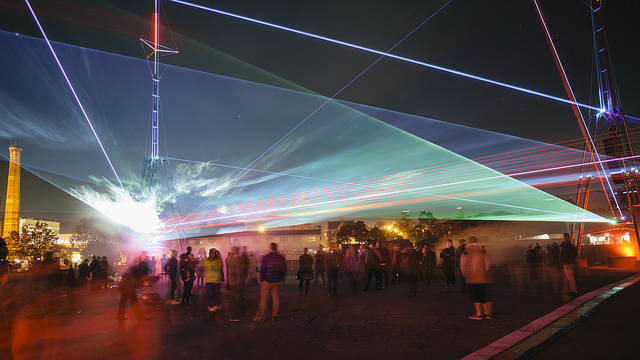 Nestled in a corner on the edge of the Hobart dockyards and Hobart Brewing Company, the vast space occupied by Dark Park again makes use of massive warehouses to inspire an industrial, gothic adult playland. Outside, braziers burn long into the night, marking unofficial meeting spots for people to eat food-truck bites. 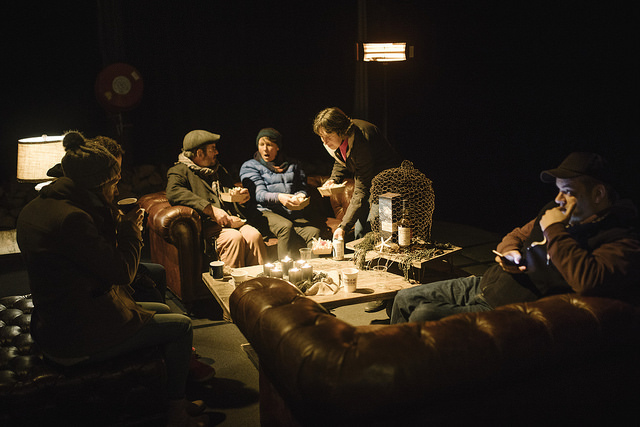 Toward the back you’ll find a mammoth Tasmanian tiger statue, next to which lies a table filled with bits of paper and pencils. The idea is to write down your fears, secrets and anything else you want to rid yourself of, and stuff the paper into the tiger. On the final day of Dark Mofo, the effigy – and your secrets with it – will be burnt to a crisp. Paganism rules around these parts.

Live music rings out, and outside you’ll find more food stalls and open fires, a welcome warmth during the cold Hobart evenings. It’s just a shame Dark Park isn’t open for a little longer each night. 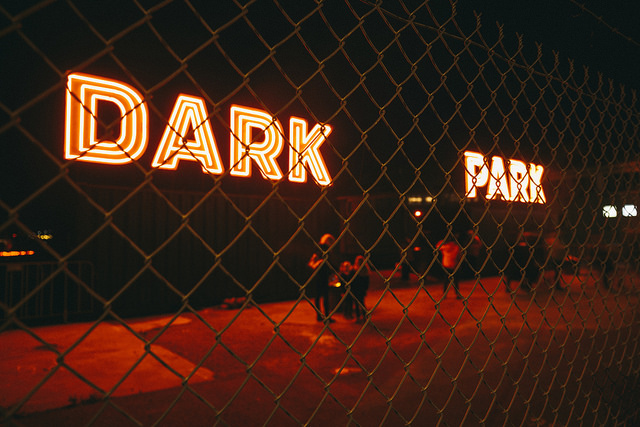 I honestly wasn’t sure what to expect when heading into the small Peacock Theatre to see Radio Gothic, now in its second year at Dark Mofo. My only knowledge was a brief blurb of what each episode would entail, but even these were vague, merely sound over imagery. In a nutshell, that’s exactly what it was, though a little more cohesive.

Radio Gothic is essentially a radio play, which, in retrospect, makes complete sense. We were ushered into the theatre, looking curiously at the various stations set up around the stage. Black-clad actors soon emerged and assumed their positions at the stations; I was intrigued. What came next were two interesting, spooky stories, performed as if on radio with live sound effects.

The first performance (officially Episode 2) told the tale of a therapist whose patient was in prison for murdering her husband in a fit of jealousy. Becoming too embroiled in her work, the therapist endures… side effects, affecting her family life. Episode 3 was a little more confined; a young woman wakes up after a long night partying, to discover a fresh tattoo on her hand. Curious while wanting it removed, she sets out to figure out what happened, eventually learning of an ancient, mysterious tattoo artist who seems to be haunting her.

The shows will soon be released as podcasts. We highly recommend giving them a listen.

The first proper gig of the festival, a solo performance from Hiatus Kaiyote leader Nai Palm was a chilled introduction to Dark Mofo’s music program. Opening for Nai was Tasmanian singer Ani Lou, accompanied by nothing more than a guitar and backing guitarist. Though I wasn’t familiar with her work prior, she has a fantastic, haunting voice that rang out through her songs, beautiful in their simplicity. She was (understandably) nervous, but despite a couple trip-ups, she delivered a gorgeous, warm opening set. 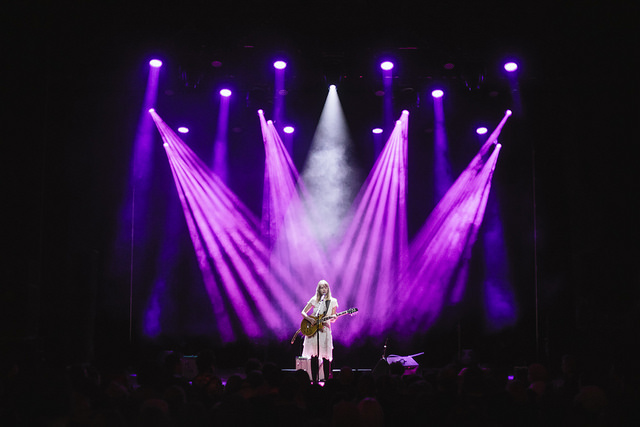 Arriving on stage with three backup singers and a guitar, Nai Palm delivered a groove-laden, laid back set that showcased her unbelievable vocal talents in an unmasked way you don’t often get to hear. The varied set featured a few covers – a particular highlight was Jimi Hendrix’s Have You Ever Been (To Electric Ladyland) – along with stripped-back Hiatus Kaiyote favourites, like Molasses and Mobius. Though the set often seemed to flow into a continuous sound, it wasn’t exactly bad, given that particular sound is gorgeous. 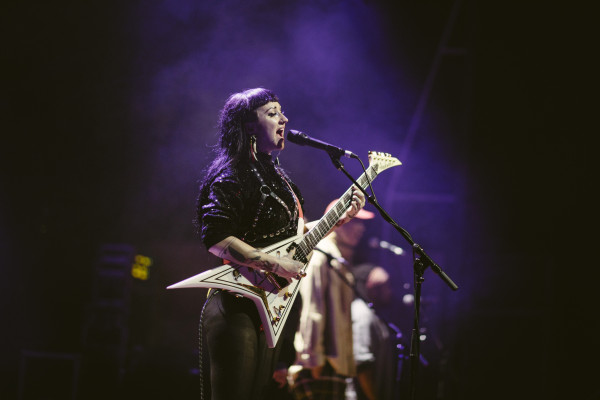 The show was far from high energy, and kicking off at 11pm admittedly made it a little tiresome. Regardless, it was a beautiful, somewhat intimate night with the enigmatic and stunningly talented Melbourne artists, whose meditative sound lulls you in from start to end.

The Odeon theatre was buzzing with energy on Friday night, ready for Aus hip-hop’s already-legendary A.B. Original. off the back of their tremendous 2016 record Reclaim Australia, this was their first ever Hobart show, and they performed to a completely sold-out Odeon Theatre. 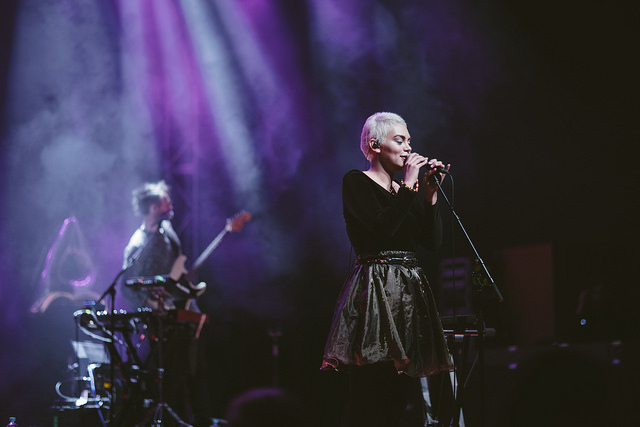 Opening for the pair was Thelma Plum, whose stage was adorned with large silver balloons spelling out her name in inflated silver capital letters. Thelma soon arrived on stage, and though she noticeably fidgety and nervous for the duration of her set, she nevertheless delivered an enveloping set, showing off her enchanting live chops. It seems her nervousness got the better of her, as she anxiously playing with a set of beads in her hands, shakily telling stories to the audience; it was impossible not to notice her trepedaciousness between the songs, but as soon as she was singing again, she absolutely shone, dancing with a playful grace as her angelic lilt rang out. 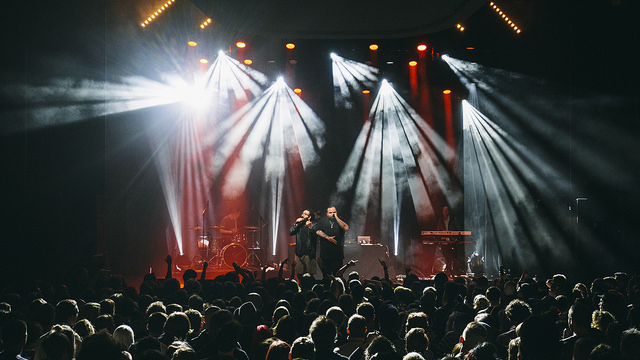 Before long, A.B. Original took the stage, erupting with the energy of a tesla coil. Briggs and Trials launched straight into their electrifying catalogue, working through nearly the entirety of Reclaim Australia, as well as legendary Like A Version cover of Paul Kelly’s Dumb Things (given Kelly was in town to perform the next night, we’d hoped for a cameo – but alas, there was none). Elsewhere, touring DJ Total Eclipse of the inimitable X-Ecutioners gave the pair a break by spending a few minutes showing off his ridiculous scratch talents, while Caiti Baker not only joined the stage for a number of guest spots, but she performed an entire song of her own, showcasing her own unique style. Briggs and Trials demonstrated sincere respect and admiration for Baker and Thelma Plum, who also rejoined the stage of I C U, showing a kind of humility most artists don’t bother with on stage. 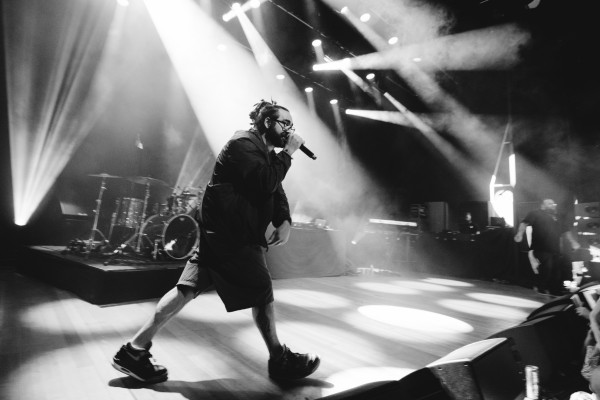 There were a number of things that I found really impressive about this gig. First of all, they had live drums, which always makes an incredible difference for hip-hop shows.

Second, their message. Their message is obvious, from shouting “No justice, no peace” with the crowd chanting back, to the powerful and confronting subject matter of their songs, from January 26 through to anti-meth hard-hitter Firing Squad, to their sobering takes on police brutality and Aboriginal deaths in custody. They stopped the show several times to point out the meaning behind their music, and the very real, relevant issues they discuss, at one point reminding the audience to actually go home and think about what they’re rapping, because it’s serious, it’s horrifying, and it matters.

It was handled with a great level of class – neither preachy nor overbearing, it simply reminded us that while we’re more than welcome to party and have a good time, we can never forget the what the songs are about. It was a powerful statement, and they managed to hammer their point home without killing the mood of the evening. The opposite, in fact.

Once again it’s safe to say that A.B. Original are Australia’s greatest hip-hop act around today. No shadow of a doubt. 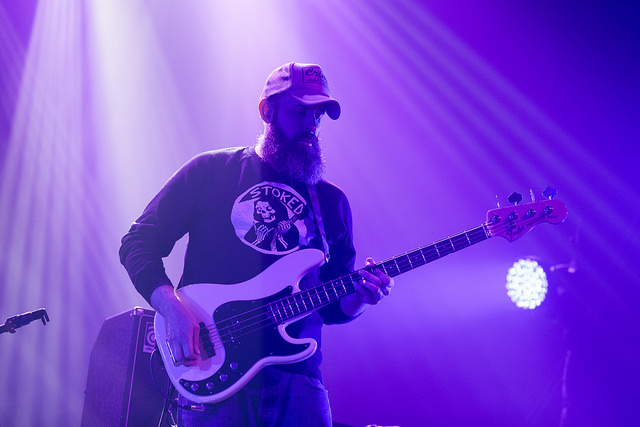 It’s difficult to express just how excited I was to see Mogwai, my personal all time favourite band. The Glaswegian post-rock quintet have had an enormous effect on my life, and they delivered everything I’d hoped for and more. Taking place in the cavernous warehouse/pier Mac 2, the space was perfect for their booming, resounding sound; couple with the predominantly clear glass surrounds, allowing views of Hobart’s waterfront and cityscape, it couldn’t have been better.

Arriving on stage with a simple “We’re Mogwai, from Glasgow, Scotland, it’s good to be here,” they launched straight into latest track Coolverine, which sounds incredible on record and even better live. After that, they played a few more classic tracks including live show staples Hunted By A Freak and Friends Of The Night, they previewed more new music – in fact, we would’ve been among the first in the world to hear the yet-to-be-released new songs live. While I would’ve loved a little more older music, I can hardly complain about previewing their new material, especially given how powerful it sounds. 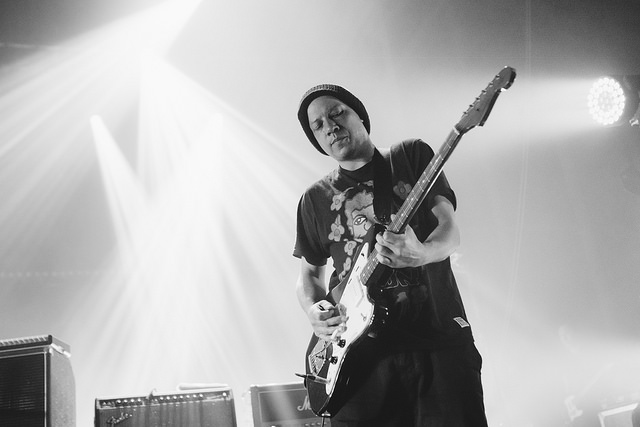 It was incredible. When they played We’re No Here, one of the heavier tracks of their set, the air shook. Their sounds wash over you, even more so than while listening to their studio works, and the resonant sound of Mac 2 lent itself with utmost power. After almost two full hours they closed with a new track, Every Country’s Sun, a phenomenal climax to a captivating show. And then, they came back for an encore, Mogwai Fear Satan, arguably their best song ever, and my favourite song of all time.

The only downside to the show was the crowd. Yes, people drink and get loud and rowdy at shows, but this is Mogwai we’re talking about. For instance, Mogwai Fear Satan has a point around two thirds of the way through where the playing drops to near silence, before exploding in a tremendous explosion of noise. It’s a brilliant moment, and one that relies on the juxtaposition of intense quiet with intense noise. What it doesn’t need is some drunk yokel screaming “MOGWAIIIIIIIIII” at the top of his lungs during the quiet section (or during the entire fucking set – there were three or four constant, grating, wasted hecklers throughout). Crowd mentality meant that a few others then joined in, often at the most crucially dramatic points of the set. Look, I don’t want to be that guy, but when you go to a Mogwai show you’re basically expected to STFU and let Mogwai transport you. 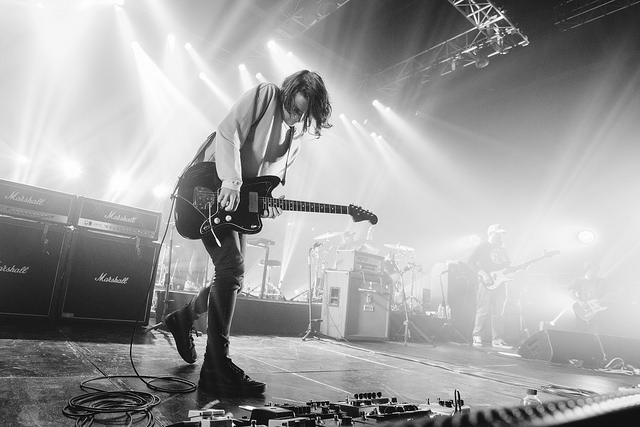 Of course this had nothing to do with the band themselves, who carried on as if nothing had happened, thankfully. Rotating between instruments, almost every member took a turn up front, while a gorgeous light show kept the eerily dark venue illuminated to spectacular, haunting effect. A couple idiots were hardly enough to ruin the set, and I walked home with the biggest smile on my face.

Thank you, Dark Mofo, the greatest festival in Australia.

Keep an eye out for our next review instalment of Dark Mofo’s second weekend. 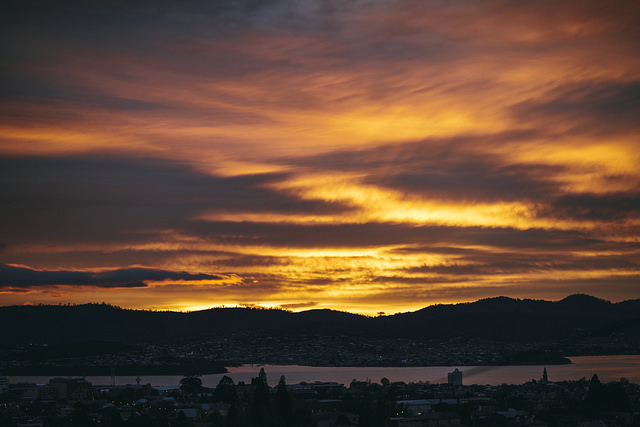