A 10:00pm set is early for some, but for fans of UK grime artist JME,in town for FOMO Festival, 10 may as well have been 2 am. By the time I arrived at Melbourne’s Corner Hotel to see JME’s only headline show, the crowd was well and truly in full party mode.

DJ Smutlee kicked off the night spinning some of grime’s best tracks, dividing the crowd into small pockets of dancers. A battle didn’t break out as I’d hoped, but it made for entertaining people watching, with the entire crowd clearly hyped as hell for JME.

People were so hyped that every time there were technical difficulties/ the music stopped the crowd boo’d. Nothing to Smutlee’s abilities, everyone was in a hyped ‘and ya don’t stop’ kind of mood.

It was then time for the awkward change over of the DJs as JME’s DJ, DJ Maximum came out, plugging and unplugging different equipment while the bass to Integrity>‘s title track began to play overhead. Slowly, out walked JME, who spat, “Before I start top lip slapping, think me and Skepta were born rapping?”

The show was off to a killer start; while Integrity is one of my favourite JME tracks it does have an ability to make me feel guilty for only listening to JME for a year or two, “Been doin’ this for over ten years,” he reminded us, but considering I felt among the oldest in crowd by about ten years, I didn’t exactly feel like a newbie.

JME’s delivery was crystal clear, a remarkable feat, with thanks to the sound production team as well as the master performer himself. So many hip-hop shows crank the beat so loud that the lyrics are distorted and difficult to decipher, but not for JME. The whole show, throughout tracks of all speeds, was perfectly audible; you could hear every syllable.

Performing mainly tracks from Integrity> like Clam, Test Me, Work and Don’t @ Me, JME did test the crowd by asking how up to date they were, before launching into Donae’O’s Black from his forthcoming album, which features JME and Dizzee Rascal. The crowd knew that one too, and seemingly satisfied with the response, he went way back and played Blam! from the 2010 album of the same name.

The crowd loved it, with the audience reaching a point of feverish energy, with shirts being flung off, crowd surfing and more. Some of the most exciting moments came when JME performed some brand new music, more of which he promised throughout 2017.

The night ended with JME’s biggest hit of the moment, Man Don’t Care, which was even more dope live than on record. Although he only played for an hour, the crowd stayed put and DJ Maximum keep spinning grime tunes well into the night, keeping the party going for as long as he could. 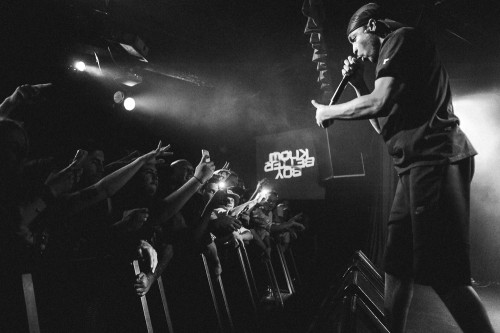 JME took time out throughout the set to pay his dues and say thank you – not only to the fans (including those up the back), but the sound and lighting teams, and even the bar staff, in an act of true gratefulness and gratitude. He was clearly enraptured by the crowd’s energy, feeding off it throughout the night. Every time a camera phone was held up he would intently stare into it and continue rapping. Every time there was a lull in the music, the crowd chanted his name. The crowd kept giving and he worked it to perfection.

Check out our full photo gallery of JME live in Melbourne.