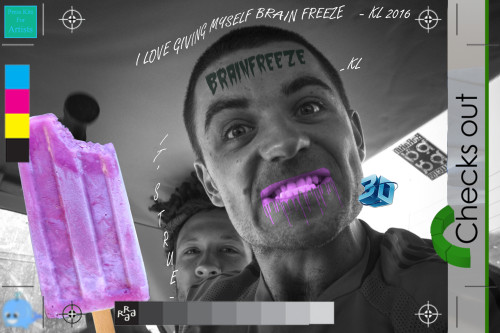 Years in the game: 5

Melbourne’s hip-hop scene is perhaps the most diverse of any scene out there. At the forefront of this sprawling underground scene is alt hip-hop group RaRa, as proven in their latest single under/current, self described as “down-to-earth deterministic shit.” Every single/body of work they drop hits hard and breaks down many hip-hop stigmas, like machoism and particularly the ‘Rap Aliens’ have always tried to break away from the ‘skip-hop’ stigma. You might recoginse the boys from RaRa from their time on stage with Alice Ivy at Melbourne’s Listen Out back in September.

Their experimental hip-hop has always remained fresh, and they deserve to land on everyone’s hottest hip-hop of the week list. We hit them up to find out more on what they’re working on at the moment.

Can you give us a quick run down of who does what in the group?

Lovely: Firstly Ll’vo turns out beats like a fucking sick dog. Then we’ll hop in the studio, see what we catch a vibe to and develop it further. Then we’ll all run thru it with hot bars and ice flow.
Riv: If the energy ain’t there a Mario Kart intermission is a must.

How did you guys all link up?

L: Riv and I have been in the same circle since high school. We got hell tight one time we all had shrooms and everyone bar us wigged out and thought they were going to die, so we were left alone and bonded like Milo n Otis. KL and I went to primary school together, then we fell off but cliqued back up after high school, pooling our change for weed and recording demos in Windows Movie Maker. Darren (Ll’vo) came into it a couple years later. He knew we could rap so one party he got Riv to drive him home to get his beatpad and we set up in a spare room, no mics, just screaming freestyles over the speakers. The room filled up and got hot so we set up a studio in Riv’s garage and starting plotting.

What got you interested in rap and hip-hop culture?

L: The front cover of Liquid Swords. My bro had it when I was young and I would stare at it for hours, long before I understood the music. But also rap’s transparency in how it vividly depicts things you might not have experienced. And how the culture is an evolutionary thing not exclusive to location, like a pre-internet AI.

I dig your style, bit of electro, bit of Milwaukee Banks, bit of Flatbush Zombies, bit of everything. How does the creative process work?

R: Our process is always changing. At first we would come together to create, now we’ve all developed the vision to start concepts and song ideas independently. Our Dropbox stays maxed out, and we get lost in message threads about where things are at and what version is where. The internet is smart though.

Can you tell me a little about this rap alien persona?

L: When we came out we delved into issues that weren’t common in local hip-hop at that time. Our sound and vibe were challenging, so we always felt on the outer. Also Darren got visited and probed in high school.

Your first mixtape was huge, as far as capturing the social norms of machoism and why people are afraid to talk about their feelings. In more recent times we have had artists like Kendrick Lamar and Earl Sweatshirt speak up and say it’s okay to have feelings and talk about depression. Do you think the whole macho and braggadocio behaviour is slowly leaving hip-hop?

R: I don’t think the artistic device of approaching hip-hop braggadociously will ever leave, because an integral element of the culture is the battle context. As for the macho vibes, for a long time it was the only option, like fans expected masculinity on mass. Now ideas of what defines masculinity and femininity are being challenged on a daily basis. These days a rapper who identifies as female, is just a rapper (who is female), rather than a ‘femcee’. Spaces have opened up, and part of that also enables men to talk. Men need to cry more. Straight up. That’s the importance of Kendrick for hip-hop and pop culture in general. And also, Yung Lean and the Sad Boys made feels hella habanero.

Your last EP PLANT2016 had a different, really uniqur sound. How do you go about keeping it fresh and always pushing it forward?

R: Always know what we want to say, our intention for a track and striving to bring something new.

L: And awareness of history and the current landscape to not fall into pre-existing pockets.

KL: At the same time, having no fear in going for something that’s tried and true, either, because when you do that on a genuine vibe 9 times out of 10 if you trust your intuition you’re going transform that lane into a superhighway anyway.

What are you working on at the moment?

L: Just hot songs. Trying to catch an energy on records and not think ‘body of work’.

R: We have a few tracks ready to drop, the first was under/current it’s on some down-to-earth deterministic shit. The others will follow pretty close behind like, jab, jab, hook, and then expect the emergence of the solo dolo works.

So we won’t be seeing a new EP in the near future?

L: Na we’re just gonna flex out some singles like a roided up swingers party.

Ben (manager): I predict that the works will want a body eventually. Parasitic wasps don’t lay eggs out in the open.

What solo projects is everyone working on?

L: Cale (KL) and Darren have been working on something for a while now but that’s hush hush till you hear it. I’ve been working with friendships a bit and am about to announce myself as the biggest post hot boy in the country. Rivs is making a mixtape about 911 conspiracy theories and quitting weed.

You’ve recently worked with Alice Ivy, Almost Here is one of my favourite releases of yours. How was it working with her? And seeing her on the Listen Out bill?

R: She is the biggest legend. Such an invested creative energy and her vibe in the studio is infectious. We were really stoked to work with her and see that the track got the buzz that it did. Getting on stage with her at Listen Out went off like a convoy of blow-off valves – word to Geelong.

How did it feel to put out the last EP through Zero Through Nine?

R: They’d caught our previous EP Pink and Teal and were keen to suss what was next. Three coffees later we had negotiated this experiment and had a release date. Those industry cats learned us up good.

Keep an eye and ear out for RaRa in 2017 – Ll’vo, River Deep, thelovelyme and KL are sure to bring more fire in the near future. Check out their past EPs at RaRa’s Bandcamp here.

All images: Lucas Brown via hedsbent