It’s been sixteen years. Sixteen long, laboriously years. Sixteen years of rumours, hints, supposed recording sessions, hinted collaborations, confirmed – and then cancelled – release dates, interview snippets and about a thousand more rumours, The Avalanches are back. They’ve released a new song and have unveiled many, many details about their new album, titled Wildflower, as well as where they’ve been hiding and what they’ve been doing for the past sixteen years.

Let that sink in for a moment.

The Avalanches Have Released A New Song. And Their New Album Is Finished.

The track, which received its world premiere on Triple J and was immediately followed up on Apple Music is called Frankie Sinatra. The bouncy, 1920s-style, clarinet-laden carnival of a track, which includes an incredible bridge by way of The Sound of Music, also features verses from our mate Danny Brown and the legendary MF DOOM, perhaps the only artist more secretive than The Avalanches. I may not be a fan of Brown’s antics of late, but I gotta say, both artists well and truly deliver.

The news followed this morning’s reveal from Apple Music’s Zane Lowe, who announced that he would be interviewing the band on Beats 1 Radio. Last month, the band unveiled a mysterious teaser video, and of course, the fact that they are headlining Splendour in the Grass and a few other festivals implied that something was bubbling and brewing away. I almost can’t believe that it’s finally here, sixteen long years since 2000’s groundbreaking Since I Left You.

The song premiere was immediately followed by a detailed interview with Zane Lowe and both Robbie Chater and Tony Di Basi.

Frankie Sinatra is one of the older tracks that they worked on, having found its sampled backbone years ago while DJing in Melbourne. It is one of two tracks featuring Brown – “We wanted [the record] to be a bit more loose and rock ‘n roll,” they said.  “Danny’s voice is almost a punk rock voice.”

“We wanted to get the record out as quickly as possible,” they continued. So… what happened? Why the hold up? “Well, for us, we kept making music… but there was so much of it and so many different projects going on, at a certain point we realised we need to pull an Avalanches record together….” They continued to detail the many projects they’d worked on, including films and an animation project “like a hip-hop version of The Beatles‘ Yellow Submarine,” and so on.

At some point between three and five years ago they began to book time in studio to commit to finishing it. They went on to talk about how they’re preparing both for full live shows and DJ shows, and the band members and their roles – including Darren Seltmann, who was considered the frontman, but wasn’t really, and officially left the group last year.

Collaborators: Camp Lo, legendary hip-hop duo and Jonathan Donahue of Mercury Rev features on a track called Colours. Biz Markie and Jean-Michel Bernard featured on a track together too. Father John Misty will reportedly be heard doing a lot of floaty “Beach Boys-esque” harmonies, and other guests include the amazing Warren Ellis (of Dirty Three and Nick Cave,) and Toro Y Moi, who will apparently be singing about taking LSD on a beach with his wife.

Here’s the artwork. It’s an actual flag – “we didn’t’ do it digitally and photographed it. Actually a lady in Nebraska made the flag she’s the World Quitting champion. We only get the best in Avalanches!” 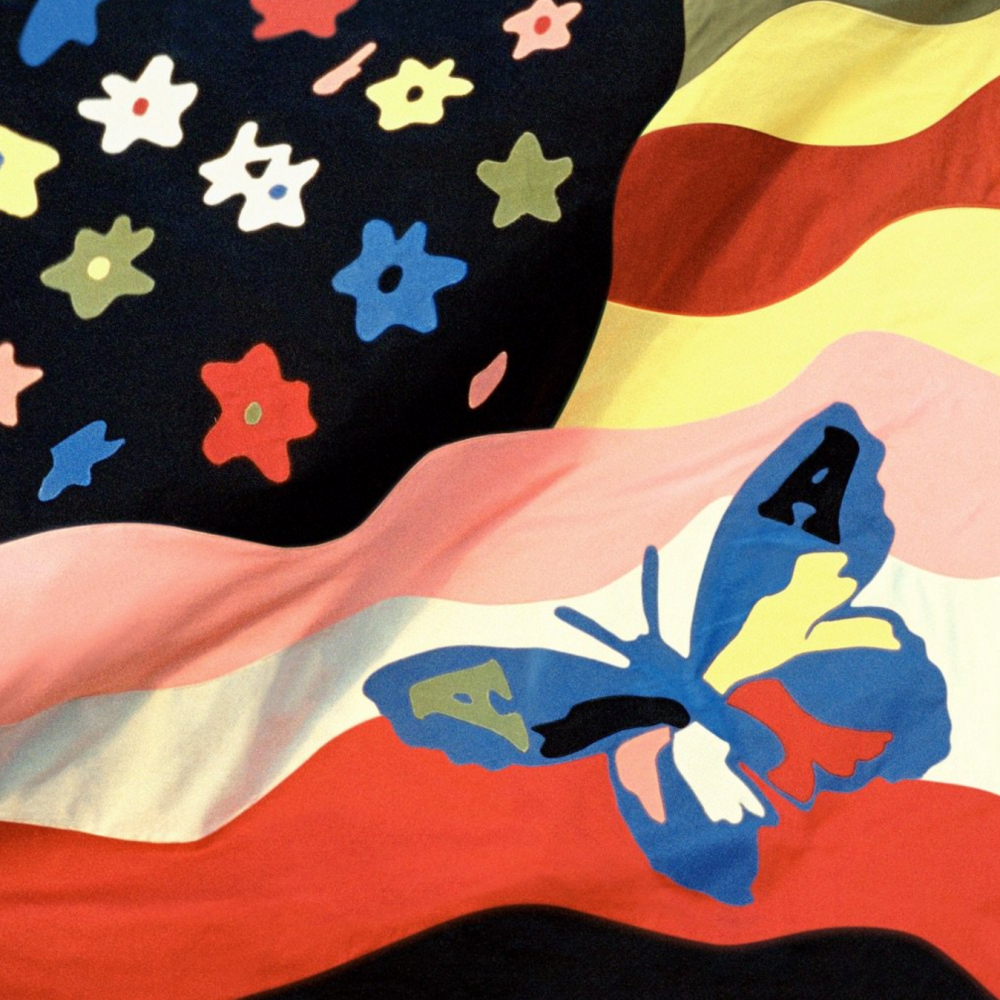 Lowe, who has heard the record, also described it as distinctly Australian, saying that it felt like long, coastal drives through the country. I’ll be honest – Frankie Sinatra does not exactly sound Australian (nor does it sound like anything in particular), but I suppose we’ll see how the entire thing sounds once it’s out.

Also, there’s a tonne of additional songs that didn’t make it onto the album – these will hopefully be getting released within a year following the record (so in Avalanches time that’s probably 10-15 years).

Currently these are the only Avalanches tour dates, but I am assuming more are coming, considering how much they spoke about preparing to play live.