When you first look at Curtis Young, you are immediately struck by the similarity and likeness to hip hop legend Dr Dre, his father and mentor. However looks were the only similarity for the pair for many years, as Young only discovered his blood connection to the legendary hip-hop producer at the age of 12. For many years Curtis Young would listen to the music of Dr Dre, idolising NWA and growing up on the streets of Compton never knowing of his ultimate connection to the icon…. Until he did.

After discovering that he was indeed the son of Dre, Curtis Young, as one would expect, was in a state of disbelief. Following DNA tests officially confirming the news, Young met his father at age 20, only to discover they had more in common that blood and appearance. For Curtis, hip-hop was always in his veins and was already a budding rapper with the moniker Hood Surgeon, with a list of growing features on mixtapes around the West Coast circuit. Meeting and bonding with father further solidified the legacy, and he began to cultivate his song writing, rapping and more recently production skills to create a path all of his own.

As most children of successful celebrities, most enjoy the lifestyle trappings that come with being the offspring of the rich and famous. For Curtis, he never experienced it, and had never expected nor entertained the thought of using his obvious connections for the advancement of his career. His journey has been self-made, self-created and self-sustained and it is within those very character traits that lies his ultimate connection as one of the strongest seeds of hip-hop.

Founding his own Forever Young Foundation, which cultivates new, up and coming artists under his tutelage, to providing community supported programs to the people and services that need a helping hand, Curtis Young is a student of the school of paying it forward.

Ahead of his forthcoming album, aptly titled Product Of My DNA, Young released new single We Get Down on December 15, his birthday. The latest in a weighty discography of 13 mixtapes and EPs, the 34-year-old artist is well and truly ready to change the game and build an empire of his very own.

Hi Curtis – thanks so much for your time. How are you and how has life been treating you?

Life has been good, keeping me busy and just focussed on finishing my album Product of My DNA is really what I have been giving most of my energy to. I have also been developing my own companies exploring film and production called Son of Chronic also so that has been keeping me busy and of course developing my own artists and just making sure everything is running right.

Congratulations on the success you have been receiving in the lead up to the release of your album Product of My DNA – can we talk a little on the conception of this album, production and the overall message you wish fans to capture when they hear your work?

Well the general message behind it is me finding out that my last name was Young, after having grown up as Curtis Macklemore and finding out who my real father was over an argument I had with my dad that raised me, telling me that he wasn’t my real father. So it basically tells the story of how I had the DNA testing done and found out that my real father was Dr Dre, and I guess from that point on I realised that the musical talent I had inside me all along was something I knew I wanted to do. I mean I was always into music before finding out who my dad was but I always thought I would pursue a career in professional football, *laughs* but as it turns out is not case. I got into the music at a young age, and after that argument led me to the truth, I just wanted nothing more than to meet my dad. After we met, I watched him, I was around him all the time, in the studio while he worked on 50 Cent’s Get Rich or Die Trying, working with The Game, just anything he would let me be around to learn from him and help me grow and become a better artist until I was ready.

I then built my company Forever Young, and started the Son of Chronic business. I did my best to write this album that allows the fans and curious alike to understand my story and who I was before I met my father and the journey I was on way before I met him.

Can you describe who Curtis Young is as an artist and a young black man navigating the waters of modern day hip-hop in America?

The best way to describe who I am is like this: I am a young man who likes to have a good time in life, I like to be positive and I like to understand the obstacles of life and how to overcome them. I am a trendsetter and a leader, not a follower, and I’m recognised as an artist that is paving his own way and walking the same path as my father or anybody else in the hip hop community. My personality is energetic, funny, I love to laugh and tell jokes and I cook like crazy *laughs* and I love enjoying my wife and my kids so that’s me in a nutshell.

How have you ensured that you remain an artist in your right, away from the celebrity of your father and stay authentic and true to your destiny?

I would have to say by not following his same footsteps and staying in my own lane. Those are some huge footsteps to follow and that’s not something I have ever tried to do. For me, I follow the steps of the most high, and I know that my purpose and path for what I am doing in hip-hop is different to that of my father’s journey. I am trying to keep my music as positive and clean as possible, it’s a grown and sexy feel, and I want to be known as a new era and trendsetter in hip-hop. 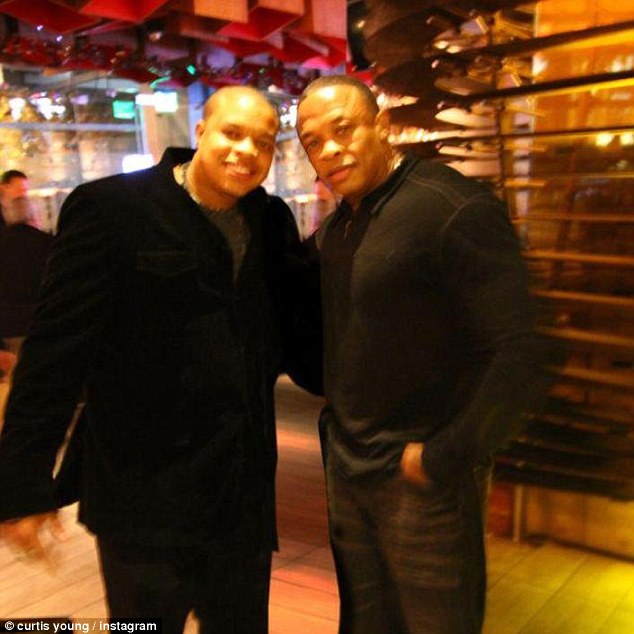 It’s a just a dad and son thing to be honest, as I am totally independent with my music. Obviously he gives me advice and guidance when I need it, but as you know he is busy *laughs* so whenever we get a chance to kick it he makes the time for me. There’s a lot to factor in with us both, but our relationship is one based on respect. Like any father, you want your son to be better than you, so it is something that I am aware of and whilst I never want to be in comparison to my dad, the apple doesn’t fall too far from the tree *laughs*.

Curtis, hip-hop means different things to different people, it is much more than just a genre of music though. Can I ask what hip-hop means to you, how it has shaped your life and how you wish to leave your blueprint in this game?

Hip-hop means a whole lot to me. It means life, something to stand for because if you don’t stand for something you will fall for anything, right? Hip-hop has helped so many people pave a way and has given so many artists life. You gotta ask yourself sometimes, what really is hip-hop?

You gotta understand the grass roots of hip-hop. I know as a student of hip-hop what was before me and what lies ahead of me in my time now. These new artists and whatever it is that they do, praise to them for doing their thing, but they also have to realise the importance of the genre they have stepped into and know their history and not fall prey, just becoming a part of the status quo. Are they paving a way for the youth or just part of a trend? You gotta ask yourselves these questions so you are equipped to deal with the changes that come with any music genre – especially in hip-hop.

What does Curtis Young know about Australia – anything you can teach me about my country?

Well I’ve been to Australia on a six city tour a few years ago with Tha Alkoholiks, DJ Yella and a few other artists and we performed in major cities like Perth, Melbourne, Canberra and Sydney to name a few. I loved it out there man, I would love to come back. From what I can remember it was a super cool place so hopefully I will be back soon.

Who has had the greatest inspiration or influence in your life and why?
I would have say a lot of great inspiration in my life would be my dad Dre, Pac, Jay Z, Nas, Biggie and of course what my dad and his crew NWA did was a huge influence to me from a young age.

This interview originally appeared on Ms Hennessey Speaks Blog and has been reposted with full permission.