Musicians seem to be the group most likely to dispel the myth that “old dogs can’t learn new tricks”, especially where technology is concerned. Perhaps because the industry is now at the mercy of said technology, or maybe because most musicians seem to have the kind of fascination and curiosity that leads to the creation of crazy things – like theremins. Neil Young is taking on the quality of mp3 streaming aged 70, and now Massive Attack have launched their own iPhone app with some fairly serious technological innovation.

Named Fantom, and described as a “sensory mixer”, the app was partly designed by the group’s own Robert Del Naja. Designed to create personal remixes, the app’s website summarises the concept:

The remixes reflect your movement and balance, the time of day or night, your location and your surroundings as captured by your device’s camera.

Try moving around and pointing your camera and recording the effects as it generates a live mix from your unique set of inputs.

With Apple Watch the Fantom watch app monitors your heartbeat and varies the harmonic and rhythmic cadences of the songs.

Movement will also create different effects on tracks. If you are stationary then the mix will also reflect this.

Your individual Fantom audio mix data can be shared with others by sending video clips of your current mixes to your contacts using iMessage, Twitter, Email or Instagram.”

It has also been reported that the app contains new music from Massive Attack, the first since 2010’s Heligoland. Previews of four new tracks feature in Fantom, and snippets can apparently be remixed in real time. The track names have been announced as Dead Editors, Ritual Spirit, Voodoo In My Blood and Take It There. Sources have suggested that Tricky features on Take It There, the last time the UK producer collaborated with the group was back in 1994. Young Fathers also collaborated on Voodoo In My Blood and are currently supporting Massive Attack on tour. 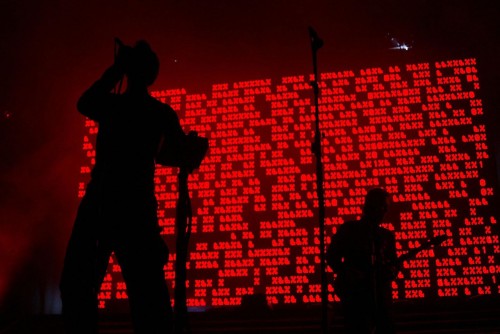 Image via The Verge

You can download Fantom here and check out the new tracks for yourself.