If there’s one person to benefit in any way from the career of Chris Brown it’s R. Kelly, whose previous horrendously misogynistic crimes (all of which he continues to hide behind the word ‘alleged’ because he was stunningly never convicted), by virtue of time and his near total lack of relevance today, often fly under the radar while everyone (still justifiably) gnashes their teeth in Brown’s direction.

It may be a decade on but people don’t forget. Especially not today either, as R. Kelly enjoyed a guest spot on HuffPost Live to be interviewed. Kelly probably swanned into this one thinking he was going to be pandered to a little bit, asked a few nothing questions about the process behind his latest mediocre and wholly self-serving album The Buffet. 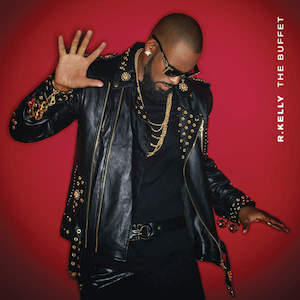 Naturally those album sales were somewhere between ‘non-existent’ and ‘in the toilet’ and so the interviewer for the Huffington Post, the fantastically take-no-prisoners Caroline Modarressy-Tehrani, asked him if his past history, a history littered with battery charges, illegal marriages and sex tapes with minors among other pleasantries, may have had a negative impact on his current album sales. This is a totally reasonable question and one that somebody who was truly repentant and remorseful for their crimes would answer without any fuss whatsoever. Not R.Kelly though, oh no. R. Kelly didn’t write I Believe I Can motherfucking Fly to put up with trivial bullshit like this, no sir. His reaction was a lot of this face:

As well as a rather butthurt hissy fit to go along with it. He didn’t just storm off the set though, not until he’d gone full meltdown and asked Caroline pretty inappropriate questions like whether she drank, questioned her intelligence and then said he’d rather go to McDonalds. Have a watch of the more interesting bits of this hilariously awkward interview here:

It’s actually comical how hostile he reacts towards being told that some of his fans might not support The Buffet (an album which is somehow projected to sell 100 000 less copies than his previous effort Black Panties in some kind of Terrible Olympics world record). ‘Fuck that’ was his initial response before saying ‘the only people who can fire me are my fans’.

Is there some kind of petition you guys can sign?

It would certainly save us from the 40 (!!!) more very unnecessary chapters of Trapped In The Closet R.Kelly reportedly has waiting to be released. ‘What a shame that interview didn’t last longer’, said nobody ever. Major props to Caroline Modarressy-Tehrani for not acquiescing to this pseudo-star and being intelligent and quick-witted enough to make him look like the absolute crumb that he is. Almost right after the interview was over, Kelly showed the world that he would have the last laugh with this ‘I’ll show them’ Tweet:

It just wouldn’t be a picnic without the ants! https://t.co/j4oYoZ5gjdpic.twitter.com/FKGIE5oJm4

The Shyamalan twist here is that you are actually the ants R. Kelly. Now bugger off.