Everyone’s favourite shit-bag pharmaceutical CEO Martin Shkreli is embroiled in yet more legal trouble, this time relating to his $2 million purchase of the one-of-a-kind Wu-Tang Clan album, Once Upon A Time In Shaolin.

Notoriously dubbed the ”most hated man in America”, Shkreli is the man responsible for hiking up the price of Aids/HIV medication Daraprim by a ridiculous 5000%. A man so deplorable Donald Trump deemed him ”disgusting”, and Howl & Echoes even paid homage by naming an Anti-Award after him for being, well, the worst fucking guy in the world.

Last week Shkreli was arrested for security fraud, with the FBI alleging that he ”defrauded investors in his hedge fund to hide poor investment choices.” The security fraud charges add up to $65 million worth of misappropriated funds. Now according to TMZ, Shkreli could have his assets seized if it is proven in court that they were purchased with said money. If found guilty and if seized, he will only be able to say that he owned Once Upon A Time, once upon a time. 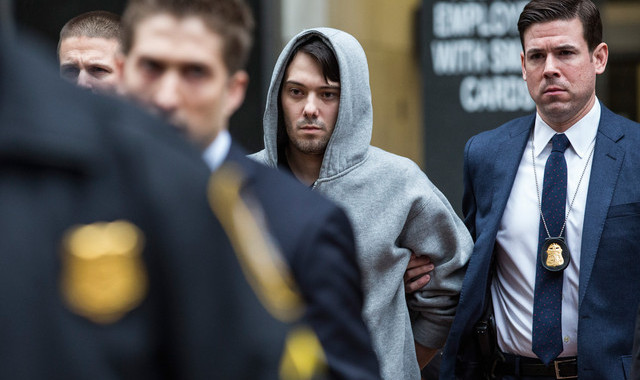 NEW YORK, NY – DECEMBER 17: Martin Shkreli (C), CEO of Turing Pharmaceutical, is brought out of 26 Federal Plaza by law enforcement officials after being arrested for securities fraud on December 17, 2015 in New York City. Shkreli gained notoriety earlier this year for raising the price of Daraprim, a medicine used to treat the parasitic condition of toxoplasmosis, from $13.50 to $750 though the arrest that happened early this morning does not involve that price hike. (Photo by Andrew Burton/Getty Images)

At the time of his arrest the FBI tweeted, ‘’no seizure warrant at the arrest of Martin Shkreli today, which means we didn’t seize the Wu-Tang Clan album.” However, the prized asset is now likely to be used against him, with the money used to pay off the restitution judgement in the case.

In the wake of Shkreli’s purchase of the album, Wu-Tang leader RZA publicly condemned him in the press while trying to distance himself from the matter, “The sale of Once Upon a Time in Shaolin was agreed upon in May, well before Martin Shkreli’s business practices came to light. We decided to give a significant portion of the proceeds to charity.” Shkreli shooting back that the rap collective ought to show him some ‘’fucking respect’’.

It is not the first time Shkreli has been embroiled in a spat within the music industry though. Three months ago Collect Records ended their association with him after his despicable act went public.