I’ll be honest: I’m glad it was Martin Shkreli who purchased Wu-Tang Clan‘s one-off album Once Upon A Time In Shaolin. It permits me write about him on Howl & Echoes and for that I am grateful.

Today we have been blessed with the news that Shkreli has been arrested by the FBI on charges of securities fraud. The SEC has also charged him with “defrauding investors in his hedge fund to hide poor investment choices.”

The 32-year-old was arrested at his Manhattan home, having allegedly used stock from biotechnology company Retrophin Inc., to pay off debts from other business ventures.

Since founding Retrophin in 2011, Shkreli had been sued and fired by its board “because of serious concerns about his conduct.” FBI prosecutors are claiming more than US$11 million was lifted from the company, while the SEC have claimed that Shkreli took $120 000 from one fund to spend on clothes, rent and other personal expenses, and in 2013 he stole $900 000 to pay off legal debts. He also promised yet another fund that they had $35million in assets, when truthfully they had less than $7000. Bloomberg have outlined even more of his movements here.

Skhreli shot to immediate infamy this year when he hiked the price of Daraprim, a drug used in HIV and malaria treatment, up by literally 5000%. Donald Trump called him “disgusting”, Bernie Sanders refused to accept donations from him, and he has overall been dubbed the “most hated man in America”. 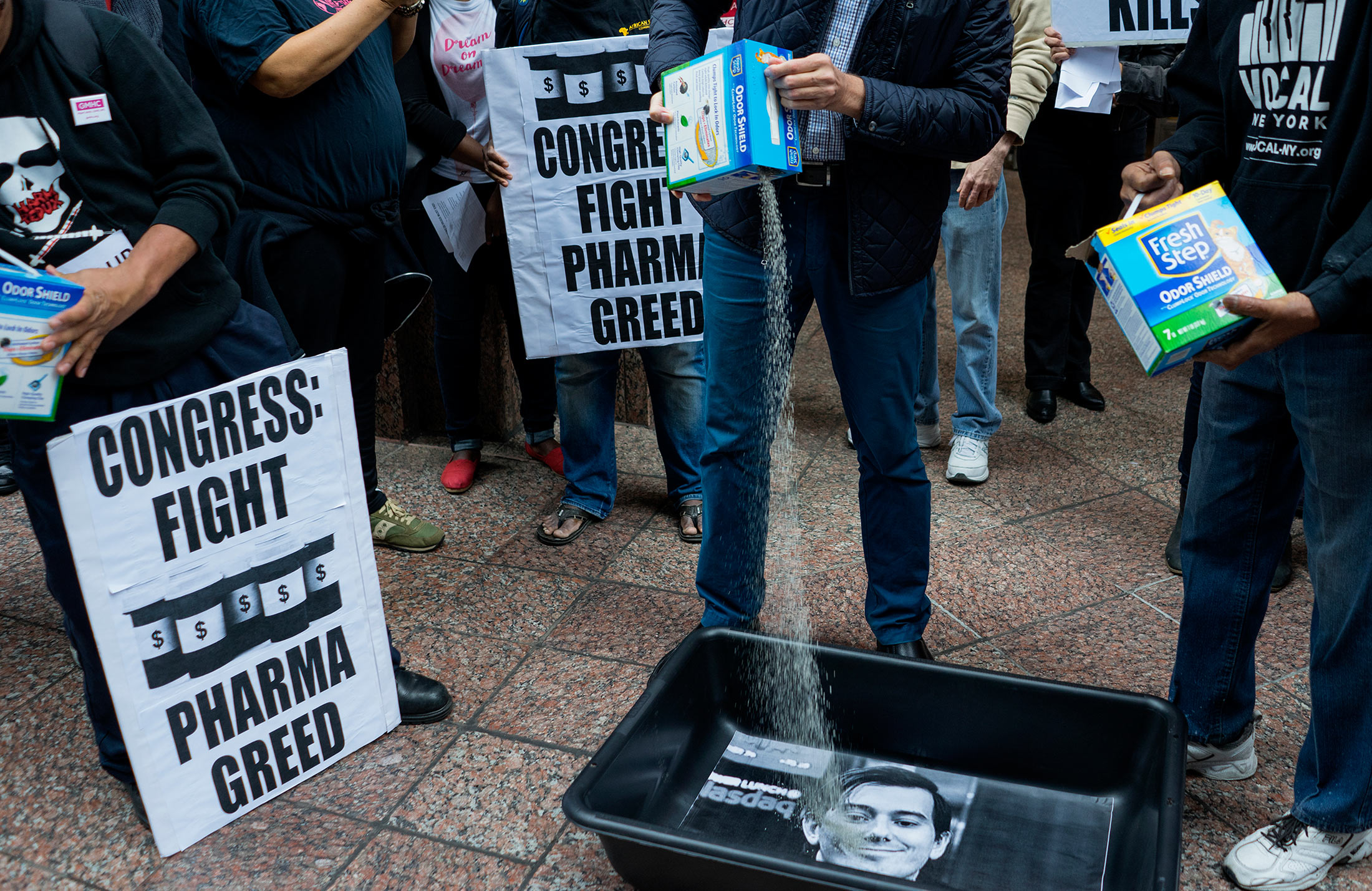 Genius protestors pouring cat litter onto Shkreli like the piece of shit he is.

Then the news emerged that he had bought Wu-Tang’s album for a cool $2 million. No one seemed particularly happy about it. One of the many voicing their concern was RZA himself, who issued this statement, “The sale of Once Upon a Time in Shaolin was agreed upon in May, well before Martin Skhreli’s [sic] business practices came to light. We decided to give a significant portion of the proceeds to charity.”

Shkreli, not understanding the difference between buying an item and buying the person who created it seemed to feel betrayed by this statement and essentially used the aforementioned interview to make physical threats against RZA as well as reference his Albanian heritage and temper, here’s a taste. “This is starting to get into some weird Albanian shit,” he warned HipHopDX. “There are similarities, very similar. I’m just getting fed up. If he doesn’t think I have the resources to do something, he fucking doesn’t know me. If Ghostface can make people disappear, what the fuck do you think I can do? I’ll fucking snap the CD on fucking TV and not even listen to it if that’s what he fucking wants.”

“To me, what I’m doing right now in the media,” Shkreli said. “Raising prices, all this shit, believe what you want, but it’s interesting. It gets people talking. At the end of the day, that’s what art is.”

He also went on to detail how he plans to bail Bobby Shmurda out of prison in exchange for him recording an album, and a grand series of plans with a clear intention to identify himself as a serious player within hip-hop. He also revealed that he has purchased Tupac’s manuscripts at an auction. “I hope I’m accepted [in the hip-hop community], for sure. Like you said, you need swag to pull off the shit I pulled off. To even have Trump call you a spoiled brat. Donald-fucking-Trump called me a spoiled brat. That takes someone special, I think.”

We’ll keep you updated on his movements.

Once again, fuck you Martin Shkreli.

#Breaking no seizure warrant at the arrest of Martin Shkreli today, which means we didn't seize the Wu-Tang Clan album.