Nothing like a little family controversy to get you in the Christmas spirit, right?

50 Cent has taken to Instagram to post a (since-deleted) rather bitter post about his son Marquise and his mother, 50’s ex, Shaniqua Tompkins. “This kid is gonna hate his mother he realise what she did to him,” he writes. “He has to make it on his own like I did. SMH GOOD LUCK!!” 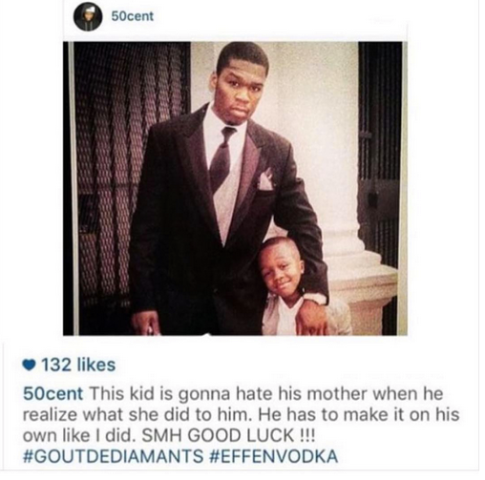 Tompkins then responded with a lengthy Instagram post of her own, in which she reveals a number of rumours and allegations about the rapper’s image, his family life and even the fact that he wasn’t shot nine times – a fact so significant, one could argue it’s the basis of his entire career. His latest single is in fact titled 9 Shots.

Tompkins alleges that Fif was only shot five times – four less than his famed nine. She claims that he changed this number to avoid comparisons to Tupac (thank goodness, right, because otherwise we’d all be going around saying that Fif is the new ‘Pac), and that he’s a fraud who created “this fictitious character” for himself. “You want to bully [our child], threaten him… I don’t try to mentally abuse my son like you do!”

From the desk of #50Cent’s baby mama #shaniquatompkins

This isn’t the first time that people have questioned the legitimacy of Fif’s nine shots claim. Jeremih fired back at the rapper on his 2010 track Down On Me, with the line “Let’s go and take nine shots, we’ll just call it 50.” Yet it goes well beyond diss tracks: In both 2009 and 2012, 50 Cent was unable to identify or remember where all of his wounds were during interviews with allhiphop and Oprah, respectively.

Fif was quick to respond to the haters:

What the fu😳k are these people talking about, we going shopping it’s CHRISTMAS. LOL# #FRIGO #SMSAUDIO