Though her debut album A Curious Tale of Trials + Persons only just came out (but let’s not forget the eight mixtapes she dropped since 2013), Little Simz has well and truly established a uniquely powerful and recognisable identity for herself. Along with artists like Leikeli47, she’s heralding in a brand new wave of nonchalantly confident, unbelievably talented female MCs, and of course, we could not be more excited about that.

Don’t Forget features her steely under-the-radar flow, rhythmically spot on and lyrically gripping. The sparse and jarring backing rhythm breaks up the verses with dramatic, varied percussive sounds, and the occasional instrumental flicker here and there. But for all the noises and effects that the rhythm section throws at her, I simply cannot move my attention away from her unrelenting flow. What. A. Track.

In other news, Little Simz has also announced her maiden tour of our Australian shores. She’s set to perform four dates at the end of February 2016, with support acts to be announced. Considering her reputation for intense, heaving, powerful live performances (check her out here, performing at CMJ), we are undoubtedly in for a serious treat. Details below, tickets available here. 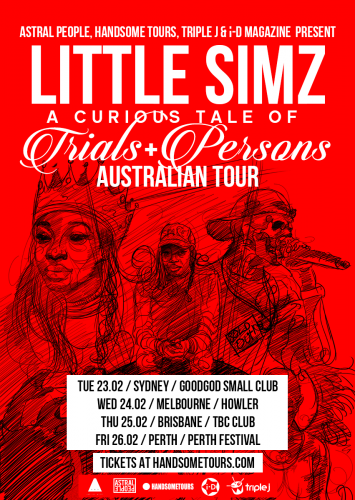