Ah, retro. So much more than a word, it’s a way of life – especially for Jack Ladder & The Dreamlanders. Easily one of our favourite local bands, these guys have a demanding, utterly captivating presence both on record and on stage. They’ve just released the video clip for To Keep and To Be Kept, the third single from their brilliant 2014 record Playmates.

The track also features vocalist Sharon Van Etten, who also sang on Come On Back This Way, which was the first single and first track on the album. Both tracks received video clips that are pretty similar, directed by Alex Smith. Both clips keep it simple and old school, predominantly featuring Jack and co singing to the camera. The vintage clip for TK&TBK is also the first to feature his band The Dreamlanders, which includes Donny Benet and Kirin J Callinan.

While the video doesn’t tell a story in the way that Her Hands did, it’s a nod to the good ol’ 1980s, deliberately fuzzy and washed-out, the ideal complement to the track’s overall colour. Dance-savvy video clips are ALL the rage right now, and with the help of the Dreamlanders, this one features some phenomenally hilarious choreography. 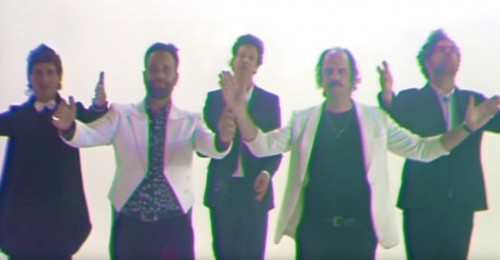 Jack Ladder and co are set to support Florence + The Machine on their upcoming Aus tour (which includes a HUGE four-date run at the Sydney Opera House), before heading across the pond for a US tour.

As support for Florence + the Machine