The chatter about sexism in the music industry has definitely increased over the past year, and that probably has a lot to do with, not that it’s happening more, but because women are just fucking sick of it. Best Coast‘s Bethany Cosentino is one such lady.

Known for their scuzzy, love soaked surf pop, Best Coast have had one of the most packed out touring schedules this year after the release of their latest album, California Nights. They’re known for being generally easy going on and off stage, showing a wonderfully harmonious relationship in the band, with the fans and with the world in general. When I think about bands that would jump up and down over a bad review, Best Coast are certainly not one of them, and in light of Cosentino’s recent social media posts, I still wouldn’t put them in that category.

“Sexism is alive and well people!!!!!” Cosentino wrote, after reading a review by San Francisco Foghorn’s David L Garcia titled Best Coast, Mediocre at Most. The part of the review she had taken offence to – and rightly so – was as follows:

“Music should never be a fashion show, or, God forbid, a beauty contest. But to do justice to the huge let-down that was Best Coast’s show last Wednesday at the FIllmore, I need to describe the incredible outfit bandleader Bethany Cosentino was wearing. She looked sexier and badder than any rock star I’ve seen in years. Sporting a short latex skirt, a sheer mesh top, and a pair of suede heels, and armed with a drink and a blood red Fender Jaguar, she took the stage to applause that might have weakened the floorboards. Women gasped, men swooned, the claps went on and on and on.”

So, music should never be a fashion show, but here is a very detailed description of what Bethany, and only Bethany wore. He then went on to say, “The outfit was–and I’m still a bit heartbroken that I have to say this-is-the best part of the evening.” But still, it’s not a fashion show guys.

Cosentino took to Facebook to voice her frustration, but quite unsurprisingly, was then subjected to a barrage of mostly if not all male users telling her it was, in fact, NOT sexist. 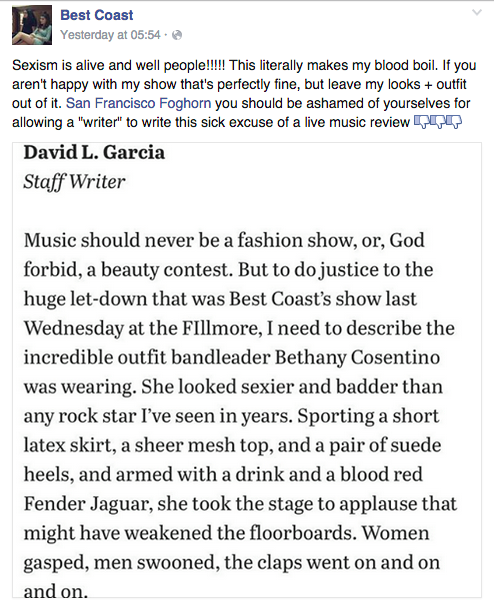 What in the actual fuck is wrong with people????? pic.twitter.com/P3GLkR8Ejw

The consequent dragging Cosentino received on Twitter, Instagram and Facebook is shocking to say the least, with both Meredith Graves of Perfect Pussy and Waxahatchee both standing up for their friend and peer.

@BestCoast @DeathAndTaxes UGHHH both articles are total garbage. I feel for you. this shit happens TOO often. — waxahatchee (@k_crutchfield) October 2, 2015

if you don’t get why @BestCoast is pissed about that sexist review and the subsequent bashing she’s received for speaking about it, gtfo thx

Objectifying women is never okay. Ever. EVER. If you are going to start your review of a band with a detailed description of a woman’s outfit or how she looks in any way, you probably shouldn’t be a music critic. Because that’s your role. A MUSIC critic: critique the music. The review goes on to discuss the connection, or lack thereof, with the audience. Yes, good. Critique that. It’s part of the show and it’s an important part at that. But don’t bring appearance of anyone into the equation. It is not at all relevant or necessary, and it perpetuates the obvious inequality between men and women in the music industry. It’s 2015, and this is still happening. I could embed each and every tweet sent to Bethany in light of yesterday’s exposure of such a disgusting event, but I won’t. Because that’s what it is: disgusting. Bethany wasn’t “ranting” or “being a brat”, she was calling out this man for what he is – a sexist, and probably a misogynist. If anything comes from this, I hope it’s more women calling this shit out. Call it out, voice your opinion, make people think twice. Such an article shows that this follows you right to the top, and it needs to change.

This isn’t about me being hurt over what someone wrote about me- it’s about calling out misogyny + sexism because it’s EVERYWHERE — Best Coast (@BestCoast) October 2, 2015