There has been plenty of debate lately over the question: what is, and what is not, hip hop? At the forefront of this debate is R.A. the Rugged Man, a New York-based MC who has long believed in the time of the ‘Golden Age’ of rap. This includes rappers such as Rakim, Kool G Rap, and the GZA, and R.A. has recently been looking for someone who might be able to carry that torch.

With this in mind, R.A. last year presented the Definition of a Rap Flow competition. Here was was where he first heard the rhymes of a rapper named A-F-R-O (All Flows Reach Out), real name James Gutierrez, a teenager from Southern California (who, in case you were wondering, does indeed sport a decent afro). R.A. knew that he was hearing something special – A-F-R-O’s voice and flow are strong, his vocabulary is impressive and he has a deep, bass voice not seen since Biggie, Chuck D and lately Jurassic 5. 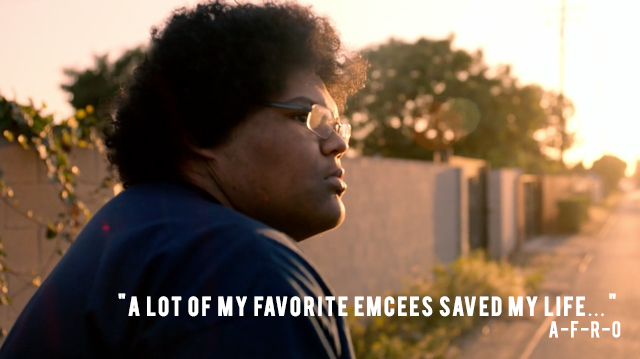 A-F-R-O seems to fit into the vision that R.A. has for the future of hip hop. “[A-F-R-O] makes all of us feel good, because a lot of 17-year-olds only know a lot of garbage that they’re being spoon-fed on the radio,” R.A. told Uproxx. “They don’t know the Rakim, DJ Premier, Kool G Rap, the GZA. So, when I introduce him to GZA and Kool G Rap and Premier in person and he knows their entire biography – stuff that they’ve done 10 years before he was born – they’re like ‘Wow, there’s youth out there like this. We’re not going to be forgotten. We’re being reborn into another generation, our music will live on through dudes like this.’”

A-F-R-O is 17-years-old and has that awkward teenage exterior, but this disappears when you hear him flow – there is no question that he has a endless vine of talent. He also radiates modesty and he really is just a young guy trying to stay humble and pay respect to those who he has admired in the rap game all his life, which includes R.A. the Rugged Man. So you can imagine A-F-R-O’s excitement at winning R.A.’s Definition of a Rap Flow. Check out his winning track below.

To celebrate the young man’s win, R.A. got A-F-R-O to record a freestyle for R.A. The Rugged Man TV. It is phenomenally fast and witty – so much so that people started doubting that it was done off the top of his head and rumours began circling that he actually planned his raps. Check out the first freestyle as well as his response to the haters, below.

So if at this point you’re thinking, ‘this guy’s great, so why aren’t we seeing more of him?’ – it seems that you’re not the only one. Just this weekend, Honda released a feature of A-F-R-O on their Uncharted: Power of Dreams web series, created in partnership with digital studio Woven. This aims to find the next big music stars, spotlighting up-and-coming musicians who are on the quest to hit it big.

Time will tell if A-F-R-O will live up to his mentor’s hopes for where hip hop is going – for now, he wants to make good music while paying tribute to the legends who came up in the game before him. Regardless of R.A.’s expectations, I particularly love the newcomer’s raw talent and flow, which certainly satisfies my nostalgia for new examples of classic hip hop music. Keep an eye (or ear) out for this one – he’s a force to be reckoned with.