Alabama’s finest, YelaWolf has once again one-upped any notion of what you thought being a hillbilly rapper could, and should be.

We’ve discussed the increasing drama and technology of video clips lately, but nothing quite like this. In this brand new video clip for Outer Space, he takes it to a whole new level.

Filmed live at the 75th Annual Sturgis Motorcycle Rally, the video clip for Love Story features YelaWolf and a live band performing inside a Wall of Death, otherwise known as a motordome or silodrome.

The South Dakota bike rally is one of the largest in the world, and has a mass of events, races, stunts, concerts and more. This isn’t their first wall of death, but it’s probably the first time a rapper and crew have gotten inside, and filmed a video, with bikes flying around them at breakneck speed, held on only by the graces of centrifugal force. Holy shit.

Outer Space is the brilliant opening track to his 2015 album Love Story. The song is already pretty great, but watching it alongside this death-defying stunt, usually reserved for absolute daredevils and circus performers, is something else.

Of course, it looks like it wasn’t ALL filmed within the wall, while the motorbikes were zipping around. But it’s fucking insane regardless – and something you have to see to believe.

Keep an eye out for more motorbike-related video action from Yela, real name Michael Atha. Pictures on his Instagram show him and co sporting a team of sexy Harley Davidsons, which we’ll see in the forthcoming clip for single Devil In My Veins. 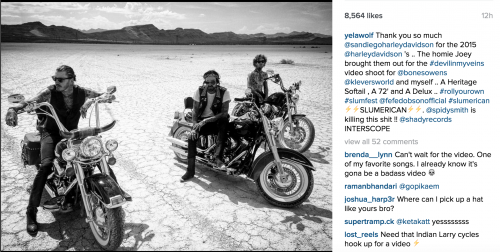 YelaWolf will be visiting Australia at the end of the year for a string of headline shows. Full details here.