Much like choosing a match on the app, users will be able to swipe left or right on a pretend profile for the artist. The swipe will take users to a link where they can purchase the record.

It sounds pretty weird, but there’s at least one cool factor here, which is that the album will cost only $3.99, as opposed to the average $7.99 (USD) that will cost most other buyers of online music.

According to TechCrunch, Tinder claim that this “isn’t a revenue-generating partnership but rather a marketing play to give users exclusive access to cool people and products”

A useful related tool would be if the app allowed users to view other users who had purchased the album. It would certainly help, right? It’s always important to know what music a potential partner listens to, and this might be a great way to push that along.

I imagine that Tinder will next be following in the footsteps of Tidal and Spotify, creating playlists for different kinds of mood. I envision different playlists for one night stands, second dates, romance, self-indulgence, and the walk of shame home. 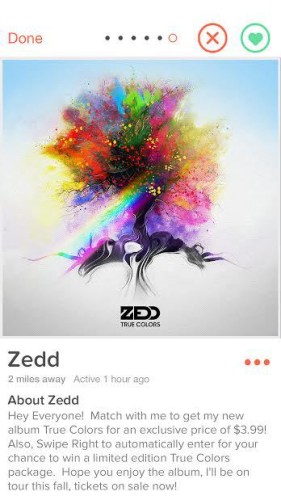