Japanese Wallpaper yesterday announced something special for his fans. Not only does he plan to go on an East Coast tour (alongside one of Sydney’s brightest, Montaigne) in the lead up to his appearance at Splendour In The Grass, but he’s also (finally) announced his debut EP.

Known better by his mum as Gab Strum, the Melbourne artist took to Facebook to announce that the EP is ‘a collection of everything I’ve released from the past few years as well as an exclusive track that you’ll only be able to hear if you buy the EP’. He also wrote that pre-orders for both digital and 12” vinyl would be coming soon for the collectors among you. 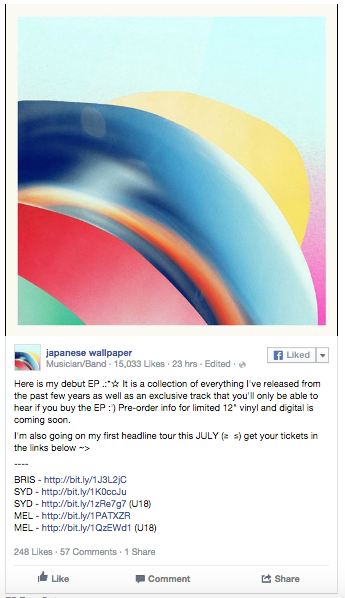 Considering that he’s only 17 years old, he’s all about the all ages shows, giving Sydney and Melbourne two shows each (one all ages and one 18+). At the moment, the Brisbane leg will only feature an 18+ show.

This will be JW’s final headline tour for the year, having already played at Secret Garden Festival and opening for Highasakite (read our review here), among other things. It’s safe to say that Japanese Wallpaper is straight up killing it – and it looks like this is only the beginning.