We don’t usually make a thing of pointing out fake news, but sometimes it’s just a bit too ridiculous to pass on.

Yesterday someone posted a link to Reddit about the word “Stan” being added to the Oxford English Dictionary:

Of course, the word stems from Eminem‘s early hit Stan, about a crazed fan named Stan. The word has since been used as a noun and verb to describe obsessive fandom, or being an obsessive fan. It became so popular, in fact, that it is now considered a real word.

Today, everyone from Pitchfork to Billboard have covered the news that Stan has been added to the dictionary: 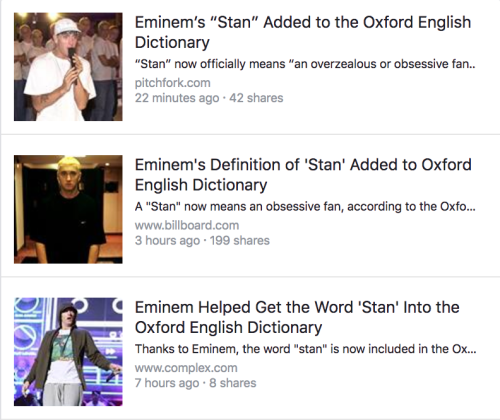 It’s all over social media and Google News: 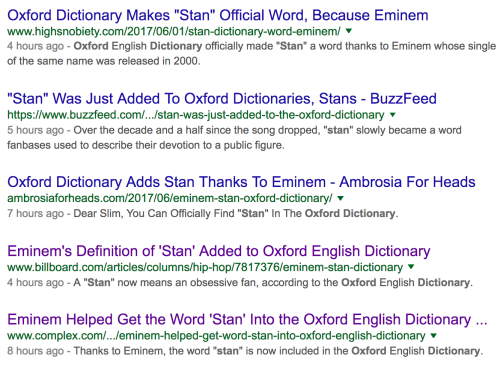 But the truth is that this is not news at all. It’s just a link somebody randomly posted to Reddit. The website isn’t even the OED, it’s Oxford Living Dictionaries, an OED affiliate.

Firstly, the Oxford English Dictionary website hasn’t added new words since March 2017, and while they did add hip-hop-savvy phrase “420” to the dictionary, “Stan” has been an official word for ages.

The noun “Stan” was added to the Oxford English Dictionary 13 years ago, in 2004.

News that happened 13 years ago is literally old news. This is just a testament to how much news publications (including this one) rely on crowdsourced sites like Reddit for stories.

Do your research next time, dummies.