The solely independent trade of Little Simz has long been an allure, among many. Since dropping her first mixtape in her mid-teens to 2015’s debut full-length A Curious Tale of Trials + Persons, the 22-year-old British artist (born Simbi Ajikawo) avoided the stampede of the majors, signing instead to her own imprint AGE 101. This, in effect, has made the female rapper, singer and musician the King to which she was referring in her debut. Strongly indie by brand, Little Simz has relied upon the growing trend of platforms such as SoundCloud and Bandcamp to reach the fanbase on which she now builds the bricks to her recording career, already receiving much respect from the likes of J. Cole and Kendrick Lamar, who once said that “she might be the illest doing it right now.”

The last time we spoke to Little Simz, she had just released her debut album and was gearing up for her first Australian tour. Today we see Simz having just released her second album Stillness in Wonderland at the tail end of 2016, giving fans only a few days advance notice. It promised to upset the quo of the industry’s standard, turning the pages to a story of personal evolution where young Simbi tackles self-doubt and embracing her own instincts. Not keen to tear off pieces to her single artwork, she did tease with pre-release singles Poison Ivy, the musically-driven peek, and the polar opposite in Picture Perfect revealing everything of what you wouldn’t expect from Simz, nor how you’d expect her album to sound – trusting in her instincts to keep it close and let mystique sell the product. Holding the majority of the album to her own domain as she has done over her career, albeit short and swift thus far, Little Simz continually capitalises from the inertia of a self-driven motivation and determination by design.

She is seemingly more than ready for her inevitable takeover as the North Londoner regards her “environment as a product of me” wherever the stage may be. Off the back of 2016’s touring that billed her alongside Kano and Anderson .Paak, Simz is setting sails for a whirlwind 2017. She is returning to Australia this month for a tour, as well as a set at Melbourne’s Sugar Mountain Festival.

We chatted to Simz during the week of her album release, during which she candidly shared some of her shine, opening up on how her dolo grind gives her the freedom to own her decisions. Before drawing the curtains on her promotional campaign and going “off the grid” for a Friday night in with just her nearest and dearest, she likened Stillness in Wonderland to giving birth and it being long overdue.

Who is Little Simz, does she put the full weight of her identity on record?

Oh it’s a combination of things. On record is one of the only true places I can be myself, I think. Some people tend to think they know more about me from my songs than they do from real life.

Is there a shedding of skin from Simz to Simbi when you’re home, chilling?

Exactly right. And I try to keep it like that. Yep.

You’re from North London. Are you a product of your environment?

Yeah. But just as much I think I treat my environment as a product of me. I definitely think that after living my whole life in Islington. Of course that’s always home but the more I’m travelling, the more I realise that I feel like I can literally make the world my home. That in itself is crazy, I think. I’m a lot more open, whereas before I used to be like didn’t want to leave the UK, and when I did, I couldn’t wait to come home. Now I’m cool to travel around different parts of the world and make it my home away and not just live in Islington.

UK artists bring their own identity to market. Your music always stands as a unique entry and definitely a shining example – not tarnished by any US influence. How important is it for you not to fall prey to factory default type pop styles?

It is important but it’s not something I consciously think about. I just don’t fall into it, for whatever reason. I don’t make a conscious effort to move away from it. I just think that I don’t do it. But that’s nothing against people that are doing that or anyone – they can do what they want. Everything isn’t for everyone.

Stormzy suggested that after Dead Body, Little Simz changed, like you became somewhat tainted. In fact you addressed that in your last album. Was there a wake-up moment where you felt a loss of innocence along the way?

Yeah… Yeah. Kind of. That can really blur the lines between fiction and reality. So, not everything was, you know, not truthful, but not to be taken so literally. But I don’t know if loss of innocence would be right phrase to choose. I don’t think I’ve changed as a person, I’m still me, I’m still chillin’. Nothing’s really changed, I just think I’ve been exposed to a lot at an early age as well. That has obviously contributed a lot to my way of thinking and the different sides that you hear. It all kind of adds to that. But I don’t know if it’s a loss of innocence.

Does remaining independent help maintain this?

Yeah, definitely. Being independent allows me the freedom, and I should be able to be great at more than one thing. As well as being a musician I have to learn how to be my own boss and how to manage myself and make the big decisions for myself, and they are all crucial to my own independence. And as a functioning person, I think in order to live in society, these are all skills that are important for me to have even if I wasn’t independent, you know? And I don’t think I would have learned as much as I have if I was a signed artist.

You’ve dropped a few singles but it seems as if you’re much more interested in dropping the project like one big framed piece of art on a single canvas?

That’s exactly true. I’m not keen on just dropping singles. Like you said, I’m more interested in just giving the whole experience. When I release an album, I’m much more about how you feel about the record altogether. Then, once you’ve tried it, you connect to your favourite stand-out songs. That allows you to choose which song is a stand-out song for you. I want to be able to give [fans] the option of figuring out what they like rather than copping singles. But, the reason why I dropped the songs like I did with Picture Perfect and Poison Ivy [before Stillness in Wonderland was released]. I just wanted something to get people excited and actually let people know there’s an album coming, because I’ve not released anything recently. I wanted people to get excited, I’m sure some people were expecting Poison Ivy to be more lyrical, whereas I tried to use more guitars and show myself to be more musically-driven rather than being all quick and witty. And I think it will make a more interesting experience.

Why choose those tracks?

I think I could have gone with any record on that album to be honest. Poison Ivy and Picture Perfect just happened to be the ones. It wasn’t anything planned. I thought, yeah, why not? I mean, they’re gonna hear it anyway and I like the fact that they’re quite opposing, they’re very different sonically and content-wise. They’re just very, very opposite and I like that because, off those two songs alone, it’s very hard for you to tell what my album will be like.

You have a gang of musical guests throw in on this album, but much like A Curious Tale Of Trials + Persons not many features. During an interview you stated that you had too much to say on the first record to share it. What made you stick to your guns again, verse-wise?

This time I just needed people to contribute musically to the overall production. I just think If I can add somebody musically to the record then it breathes new life into it. So a large proportion of it have added to the music. I’m just grateful that this time round I was able to work with people I call my friends. I just think it was cool for me to have the option to have them. I don’t want to be that artist that is like, ‘I don’t wanna work with anyone’, because I think people get that perception that I don’t like to collaborate and that’s not what it is, that’s not true. They just have to be right, you know? I’m not like, let’s have a guest for the sake of having their name on the album. Especially when it comes to my own stuff, I feel that the features are already on the same page as me and that works.

Speaking of features, outside of your album, your feature on Kehlani’s Table was dope.

I was surprised there was no feature of her on this album. In this instance when the chemistry is right, do you ever think that this might carry over well on further projects?

100 per cent. I’ve known Kehlani for maybe three years now and we’ve developed a friendship from the first piece of music we ever made together. So our friendship was never based off just music, we just got on. So it’s just not a rush for us to work on a lot of music because I know we’ll be friends for a very long time, and until it naturally happens for us like it was with Table – that was like the quickest and easiest thing I’ve ever done. Everything came easy and it just felt so natural, you know what I’m saying? We came out with the song one day and then the next day we went back to record it then we sent it back and put it out the next day. And I think sometimes that can produce the best results. It didn’t have to be a push to get it done or anything. I’m all for that type of collaboration with someone. But apart from collaborating, that’s my friend. So that was always gonna be an easy thing.

What will you do on the day when it drops?

I’m nowhere to be seen. At all. I will have a few of my friends over. I cook dinner. I might, I dunno if I can say, but just chill out. Just be stationary with it. It’s just been very hectic, obviously it’s natural when you’re gearing for an album release. I’ve decided I’m just gonna take it easy, man. It’s the end of the week as well and I just wanna post a link one time and go off the grid. 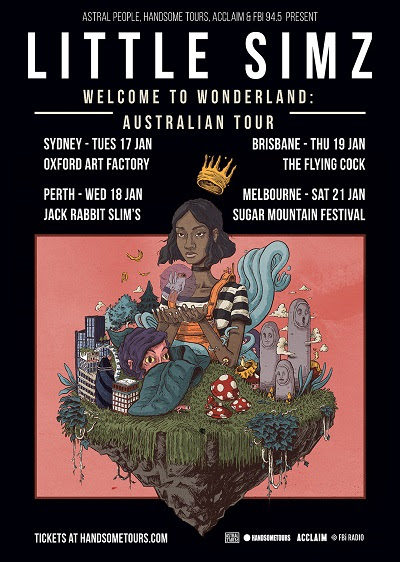