Longstanding Sydney-based party Halfway Crooks is without a doubt one of the country’s best and most beloved hip-hop events, having prevailed for an incredible seven years, surviving lockouts, venue closures and even Donald Trump. This weekend marks the biggest event of the year, and that’s a big bloody deal. HALFWAY CROOXMAS kicks off tomorrow, December 3 from 9pm at Hudson Ballroom – tickets more info can be found right here.

Ahead of the party, it’s time to reflect on some of the best new music of 2016. Rounding up what’s been an unbelievably fruitful year for hip-hop and music in general, your favourite rap dads and purveyors of heat, Levins and Franco, are proud to present the 2016 Halfway Crooks Awards!

RAP ALBUM OF THE YEAR

Had to give this one to Chance… What an album, what a year. Chance slid right into everyone’s hearts with the most soulful album in rap since Kanye’s My Beautiful Dark Twisted Fantasy.

Levins: Kamaiyah, A Good Night in the Ghetto

I was really surprised this album didn’t get included in the same articles that celebrated Lemonade and A Seat at the Table this year. Kamaiyah’s voice is fantastic and the beats on her debut album are some of the best I heard all year. If you like West Coast rap and feel like a shithead when there’s no women in your top 10 rappers of the year, cop this album. Every time I put it it on I’m like “why didn’t I listen to this sooner, I love this album!”

R&B ALBUM OF THE YEAR

I simply cannot decide. Both queens delivered what I feel are the respective albums of their careers.

I’m less diplomatic about this. Anti is the winner. So many songs that you don’t realise are terrific until the tenth listen of the album. She also wins the award for the two best songs under two minutes of 2016: James Joint and Higher are both in my top 5 songs of the year.

SONG OF THE YEAR

It’s rare when a rap track goes completely bonkers commercial and I’m genuinely happy about it. I think I played this on repeat for about a fortnight after hearing it. This was a rare exception, and even with the commercial success, I am not at all bored of it.

Let 2016 forever be remembered as the year I came back on board the Kanye train for the first time since 808s and Heartbreak. This song was my favourite, if only for the fact that it led to entire nightclubs full of people singing about bleached assholes.

RAPPER OF THE YEAR

It’s gotta be Drake right? Ok, so Views wasn’t his best album, but still had One Dance, Controlla, Childs Play and a bunch of other super solid album cuts. Plus, found the time to feature of Rihanna’s Work, DJ Khaled’s For Free, YG’s Why You Always Hatin’?, and is dropping another project in December – so I think it’s safe to say he’s gonna once again own the southern hemisphere summer.

So many rappers were disappointingly quiet when it came to this year’s election but YG cut straight to the point and deserves this award just for making the best political protest song of our lifetime. Fuck Donald Trump.

PRODUCER OF THE YEAR

Franco: I’m renaming 2016 the year of the co-producer, as nearly all my fave tracks this year have around 3-5 producers credited. I’m gonna give my vote in this category to Frank Dukes, a lesser known producer but is credited with co-production credits on Travis & Thugger’s Pick Up The Phone, Drake’s Fake Love, Rihanna’s Needed Me & Sex With Me, Kendrick’s Levitate and Kanye’s Real Friends… Ooof!

Levins: Metro Boomin was behind so many of my favourite big tracks this year, and produced the EP that unlocked 21 Savage’s potential to make a song that I didn’t want to turn off after 30 seconds.

VERSE OF THE YEAR

If all rappers could mention their favourite shitty restaurant chains in verses next year that would be tight. I’m looking forward to Kanye rapping about fighting with Kim in an Applebees next year.

COMEBACK OF THE YEAR

Franco: It’s impossible not to give this to big Guwop aka Gucci Mane. Off the back being released from prison mid-year, he’s dropped two albums (with another on the way in Dec), had a gang of hot features, gotten engaged and smiled more than any other rapper.

Levins: Team Gucci over here too. He gets extra points for managing to win this award in spite of me not really listening to any of his albums this year.

I’ll be honest, Kendrick kinda lost me with TPAB, but then seeing it live it all finally made sense to me. And the fact that he performed solo with only a four-piece band, no visuals or tricky stage gimmicks and still had stadiums going bananas to every song, just shows how powerful his stage show is.

Levins: Just on name alone, The Meeting Tree’s Some Gronks Are Cops tour.

May the greatest side project this world has ever known RIP in peace.

Levins: Not a new one and not even an adlib but in 2016 Metro Boomin’s “If Young Metro don’t trust you I’m gon’ shoot you” surpassed “We got London on tha track!” as best producer drop of all time.

Franco: Not at all rap related, but I can’t get past the Obama + Biden memes. Topical, hilarious and still super funny even if the election outcome wasn’t. 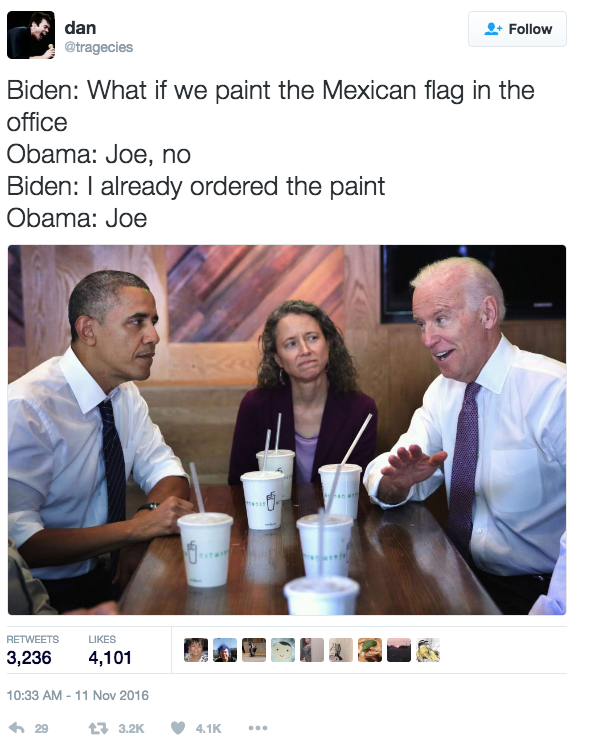 UNDERRATED RAPPER THAT MORE PPL SHOULD LISTEN TO IN 2017

D.R.AM could easily be labelled as a one hit wonder after the success of Broccoli, but then he backed it up with Cash Machine (ed note: and Big Baby DRAM). Dude is a total star in the making. His debut album was super fun, he smiles a lot and seems like a total sweetheart.

I love D.R.A.M. too (if we were giving an award for best actually good house track on a rap album he’d totally get it for Outta Sight) but Kamaiyah’s so great. If you liked her hook on Why You Always Hatin? Definitely go in on her mixtape. Can’t wait to hear her release a proper album next year.