A few months ago, during a conversation about the best hip-hop concerts ever, a friend told me how he regretted underappreciating Method Man and Redman‘s Australian tour seven years ago. Only years later did he come to realise what the true greatness he had witnessed, and I felt tremendously that I had missed them at the time. Coincidentally, the pair announced their Blackout tour just weeks later.

Initially supposed to take place in September, “a very late scheduling conflict” forced the tour to be postponed, and it finally kicked off last week.

After standing in line out the front of Toorak’s Trak Lounge for nearly an hour, the crowd began to get antsy. Some wondering if we were ever going to be let inside, and if Meth and Red were actually here. Finally, a man came out and told everyone that one of the sound guys had fallen off his ladder and that we were having to wait for the ambulance to finishing checking if he was okay. In the meantime, we were let inside to the sweet sounds of DJ Agent 46 spinning old school hip-hop tunes.

Taking over from DJ Agent 46, DJ Hijack kept us hyped, spinning classic tracks to get the crowd in the mood. Once the audience began nearing bursting point, both in capacity and energy, out rocked two new DJs: Wu-Tang Clan’s DJ and producer Allah Mathematics and Redman’s DJ, the legendary DJ Dice, best known for his work with Das Efx.

Soon, out of nowhere, came Method Man’s voice. He was behind the curtain somewhere, a rapping Wizard of OZ. He then asked Redman, and subsequently the crowd: “Do you want to get high, man?,” the famous phrase from the intro of their Blackout album. The two then burst onto stage and began rapping, the crowd lost its mind. Everybody was jumping around, the energy was incredible. Their energy felt sincere, almost as if they were imparting wisdom to the new generation. 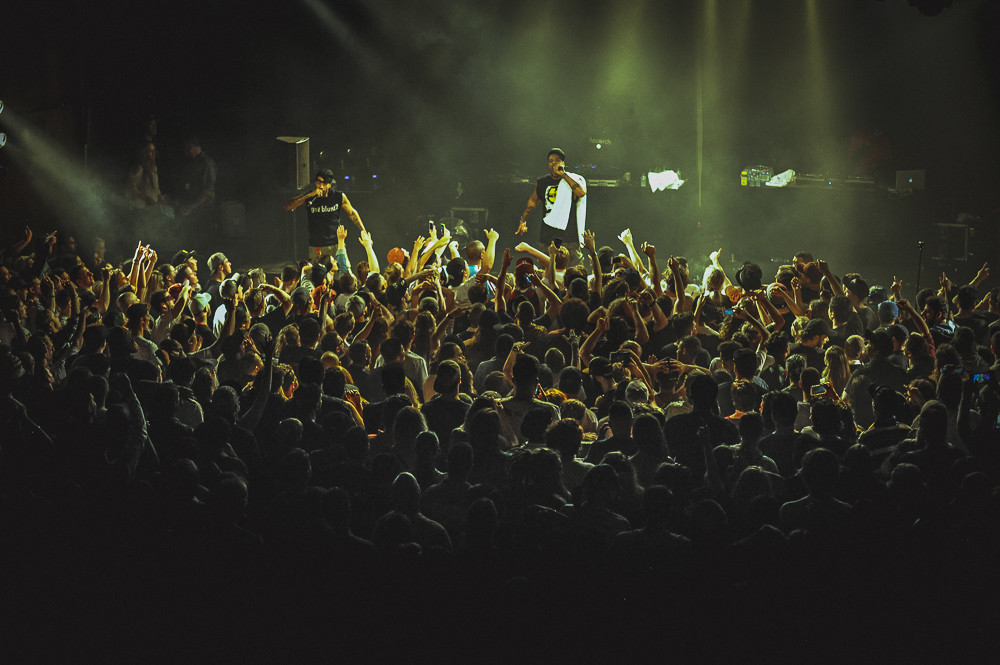 After two songs Method Man welcomed everyone to the “Redman and Method Man show,” he stated that you need have two things to be a part of the show. “You got to have weed and you got to have energy.” The smell of weed filled the air, security did what they could to stop people smoking but ultimately decided turning a blind eye was probably a better idea, considering how outnumbered they were. So with the smoke in the air and a noticeably relaxed vibe, they launched into one of my personal favourite tracks, City Lights. Meth and Red have the greatest on stage presence that I have ever seen. It was amazing to see true veterans of hip-hop show us why the crowd considered seeing them perform one of the bucket list of hip-hop shows. The two bounced around stage, flawlessly backing each other. While one would come up to the front of the stage to rap, the other would be on the other side, displaying their famous grins.

The more the crowd matched Meth and Red’s energy, the further they took it, splashing in plenty of Wu-Tang gems along with plenty of Blackout tracks. “We like doing the old shit,” Redman proclaimed, before delivering an incredible rendition of Wu-Tang’s Method Man. I have seen Wu-Tang twice now, and although Method Man has yet to join them down under, but the group has always paid tribute to him by playing this track. And it went off, the whole crowd rapped every lyric.

Meth and Red had more than just legendary DJs touring with them, also bringing along special guest Streetlife. Streetlife is a close associate of Wu-Tang, and is very close with Method Man, appearing on almost all of Meth’s solo tracks. He appeared throughout the night to perform his guest verses, adding a fresh flavour to the sound. 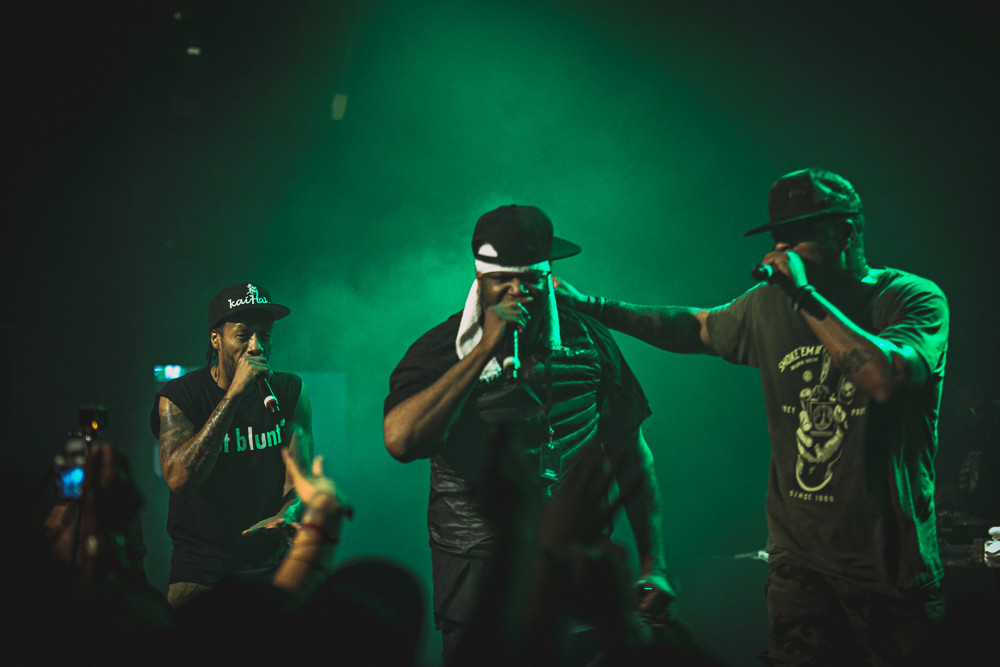 Later on, Mathematics was also asked to show off his scratch skills for the crowd, with Meth and Red both bigging up the DJ/producer as the most important part of hip-hop. Mathematics is not only a wicked DJ and scratcher, but the creator of the Wu-Tang symbol, as we learnt on the night. We also learnt that a How High sequel might one day be coming, with Meth asking the crowd if we wanted to see a sequel to the pair’s cult stoner classic.

Really showing off just how impressing they are lyricists, the two broke it down for an a capella Y.O.U. Just when the crowd thought that they reached thir peak, they pulled more tricks out of their sleeves.

We witnessed greateness, and indeed, it quickly made its way into one of the best hip-hop gigs ever. 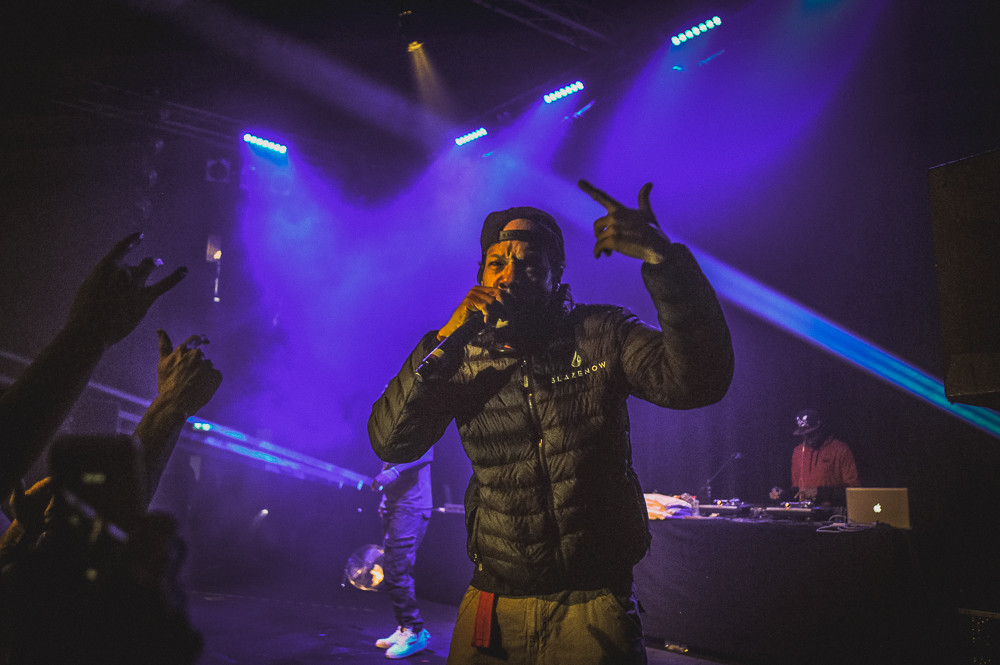 This ended the official performance part of the night, but it wasn’t over just yet, as we were treated to something pretty unique – Wu-Tang Karaoke. Mathematics played a Wu-Tang beat and Method Man asked the crowd to rap along if they knew the words. If the crowd got it right, they played another, while Redman started rolling blunt after blunt on the DJ table.

I can safely say that Method Man and Redman was the greatest hip-hop I have ever been to; it was truly a bucket list performance. No group out there has the chemistry, energy, and stage presence that these two have.

Check out our full photo galleries from Melbourne and Sydney.