Reunion and nostalgia tours are not new. For years, bands, especially those who were really huge in the 60s, 70s and 80s, have embarked on reunion tours, greatest hits tours, and ‘farewell’ tours that never actually end. They can be fun, it’s good to tick something off the bucket list. They can be amazing – some of rock’s most important rock bands can still deliver haunting and powerful performances in 2016.

But now we’re closer to 2020 than 2000 and the ’90s acts are coming out to play. And unfortunately that includes a lot of long-forgotten music that could’ve easily remained dormant. It wasn’t enough for the fucking Vengaboys to announce a tour. It wasn’t even enough for Brandy, Ashanti and Ja Rule to have all toured this year. No. Now, a joint tour has been announced, and is set to feature B*Witched, S Club 3 (that’s not a typo, they’ve apparently lost four notches), Atomic Kitten and the alleged “bad boy of boybands,” East 17.

Irish group B*Witched, best known for C’est la Vie and Rollercoaster and Atomic Kitten, who you may remember from timeless classics – oh, wait, no, covers of timeless classics like The Bangles’ Eternal Flame and Blondie‘s The Tide Is High, were pulled back into the spotlight in 2014, for a has-been-pop-band-reunion reality show. And now they’re touring again. Alright. S Club 3, back when there were seven, also had their own reality show on BBC. They also had two major albums that did impressively hit the top of the UK charts, helped by singles including Don’t Stop Movin’ and S Club Party. East 17, once again the alleged “bad boy of boybands,” brought a little rap to the pop masses with House of Love, Stay Another Day and their epic Tupac-Biggie level beef with Take That. 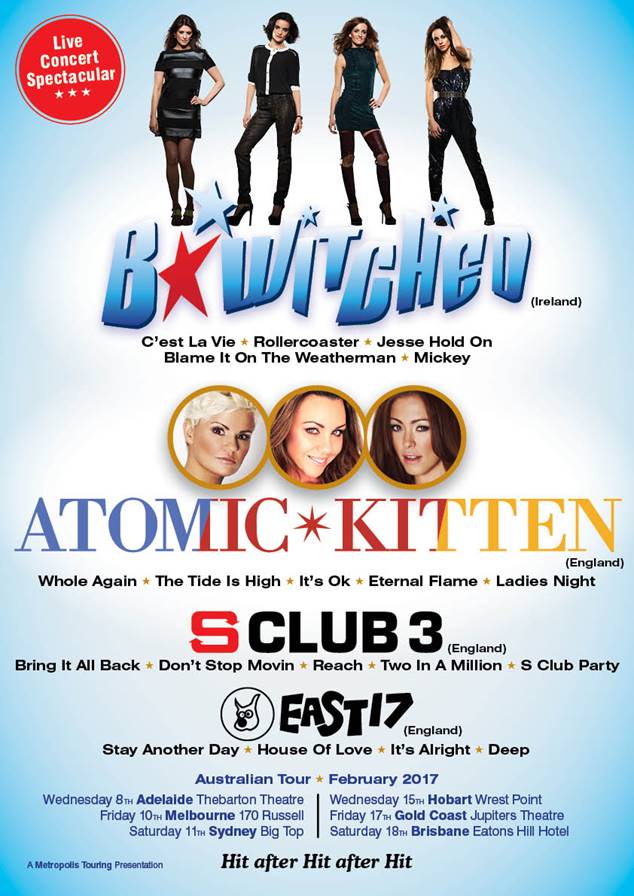 Tickets go on sale at 12pm local time on September 1, with a pre-sale kicking off on August 30 from 2 pm until August 31 at 5 pm local time. Details here.

This might be an unpopular opinion, but: Why? Why why why? WHY?

Are we really not yet at a point where this is TOO MUCH NOSTALGIA? Why does everything have to be resurrected? Why are we flogging such long-dead horses?

These are not rhetorical questions, by the way. I’m really not writing this from an elitist or snooty perspective – I’m just desperately trying to understand the fucking appeal of ’90s pop nostalgia concerts and of this lineup in particular.