Sherbert Gang is a name you may be unfamiliar with right now, but let that change today. A music-focused creative collective based in New York City, it was founded by Brian Brater, also the co-founder of legendary hip-hop label Rawkus Records and internet giant Uproxx.

This week sees the release of their first video, for new single Far Away. Directed by Andrey Smirny, the animated clip is immersive and mesmerising, not to mention beautiful and incredibly unique. The song itself is interesting, too, melodic and warm, with plenty of textural layering and programmed drums. Watch below, and welcome yourself to the world of Sherbert Gang.

Brater’s history in music begins in the 1990s with Rawkus Records, the label responsible for some of the most important hip-hop releases of the late 1990s, including Mos Def & Talib Kweli‘s Black Star, Company Flow‘s Funcrusher Plus, and early releases from Eminem, Common, Pharaoahe Monch and many more. Since, then, Brater went on to found Uproxx, among other ventures, and now Sherbert Gang. We spoke about what Sherbert Gang is, why it’s here, and how the industry and cultural landscape has changed today.

So what exactly is Sherbert Gang? “It’s punchy as fuck,” Brater sums up. “The music in itself, it doesn’t sound like anything you’ve heard. It’s hard, it sounds like Phantogram, kind of, Panda Bear, a little bit, but there’s more drum programming, there’s boom bap, there’s good hi hats. And with the animators and creators that I’m involved with, it will speak for itself.

“Is it gonna be the most popular thing? No. Am I redefining youth culture? Probably not. The sound of the music stands out, but that’s not what I’m trying to do. I’m just trying to be a part of this vast movement. The messaging is a little different to what you’re hearing today. I want a nature of exclusivity around our messaging.”

In today’s musical landscape, everything is changing.

Brater cites everyone from Vince Staples, Vic Mensa and Run The Jewels, to James Blake and even trap music as those leading the way today. Sherbert Gang isn’t setting out to change the game, but to participate at a time where music is not only shifting, but elevating, blending and expanding, on musical, thematic and lyrical levels. “Even just on an engineering level, so much is blowing me away,” he says. “The levels, the frequencies I’m hearing. The production is extraordinary. The depth and width of some of these tracks, the technology everybody is plugging into is really unique. I think Sherbert Gang is gonna be about great artists using great, cutting edge technology.”

Music in 2016 is more diverse, more immersive than ever before, and with that has come many interesting debates about the divide between good or bad, real and fake, music and art, media and beyond. What’s most interesting is the thinning gap between what one can consider good or not. For example, a conscious rapper with socially aware lyrics may be considered ‘better’ or more elevated than a trap producer or party rapper. However, on a production level, it’s difficult if not impossible to consider one particular style better than another, and Sherbert Gang – who do not currently have any rappers involved, by the way – aims to be a part of that new order of quality.

“I prefer Kendrick to Rae Sremmurd, but one isn’t necessarily more or less relevant,” he notes. “Now, when you critique these artists, just because we don’t share the same vocabulary or experience doesn’t meant it doesn’t resonate.”

“The biggest song in recent memory? Panda. [Desiigner]’s got a thing, and he made the record, it was beyond fire, engaging, big – it away so big. I haven’t seen a record like that in a long time. Is he on the same lyrical level as Kendrick Lamar? No. Will his career be as impactful? No, but I’m not gonna discount the way he’s engaging with the massive audience he’s engaging with. He’s crossing over on every level, every demographic: men, women, white, rich, poor, everything. And I find that really interesting. We’re entering an era that’s post-critical. Technology has enabled so many creators to make incredible fucking beats.”

Another crucial point of debate in today’s environment if the connection between audio, visual and media. The positioning of Sherbert Gang in the context of 2016 is interesting in that regard. Brater and his team are aiming to take pieces from every aspect of today’s musical and creative climate, and to curate it, sonically and visually, in a way that both enhances and feeds off its surroundings, all the while employing a sense of curation, of engagement, and of creative freedom.

Brater is in a unique position in that his work with Rawkus, and his subsequent years in media, have allowed him an incredible perspective into how the industry has shifted, and into the ways that people consume and experience music and art today. He’s now taking his own understanding and experiences, and injecting them into something that can only exist in 2016.

“We want our message to be undiluted and creative,” he explains. For the most part, gone are the days of a label’s artist development, or of a musician being separated from other aspects and outlets. Like many of his contemporaries, and those just starting out, “it’s about setting your own path and to be in control your own destiny. If you were an actor and you joined the hollywood system back in the 30s and 40s, you were completely sculpted by the studio, and that is really the model that the entertainment business has come from, but now it’s changed a lot. It’s really become about the creators and the direct connection they’re making with their audiences.” 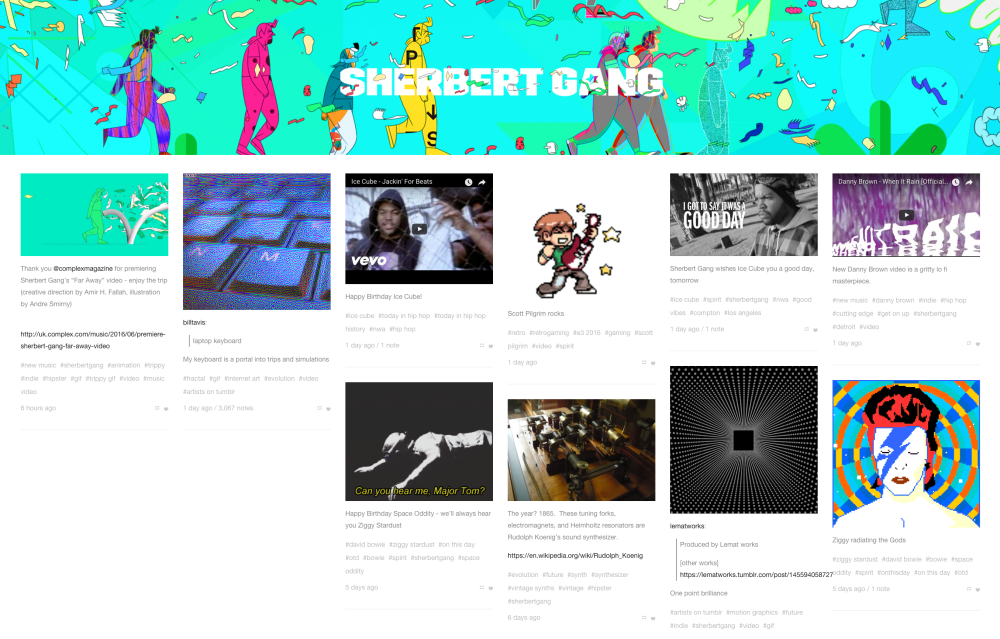 This  notion of engagement and connection is another way that today’s industry is growing, and Brater aims to do the same with Sherbert Gang. He cites the rise of EDM and it’s direct engagement, it’s constant online presence – be that through Soundcloud, Twitter and beyond, as an example of how this has led to such success. The same can be said for so many artists who have developed digital identities and audiences entirely based online, which is remarkably far removed from the on-ground marketing and engagement of past decades. “It used to be that the only way to connect with your audience was by doing an arena or stadium tour, by selling records and t-shirts. Now you can share your video on Youtube, or release exclusive content. It’s completely social,” he says.

The future of music is clearly centred on artist collectives and brands, on personality and creative identities. Music and musicians that fans can relate to on an intimate, personal level. With that comes so much more than the music; the visual and curatorial aspects, in particular, have risen in a huge way with the advent of artists emerging via Tumblr and Youtube. Sherbert Gang’s website acts as a cultural collection of sorts, sharing tailored content, music videos, gifs, photography, songs and more in a way that seeks to engage with, and influence, their audience.

In 2016, the collective is at the crux of all music. Be it conscious hip-hop or EDM, electronic productions of pop powerhouses, all media is merging, and all creatives are banding together. Artists are allowed more autonomy and creative integrity than ever, and with that has come a personality, a presence and an all-encompassing audiovisual identity. It is precisely this, that Sherbert Gang is aiming to create for itself and for its audience, and 2016 couldn’t be a better time for it.

Head to the official Sherbert Gang website for more, and keep your eyes peeled for releases in the near future.

Keep an eye on Howl & Echoes for the second part of our interview with Brian Brater, about the history and legacy of Rawkus Records.

Read more: The Innovators: The Shifting World of Album Releases in 2016